Move over Whatsapp video calls, it's showtime for live shopping

A clutch of companies is offering live commerce services to merchants for a monthly fee as well as a cut of their sales. Do they hint at the future of retail? 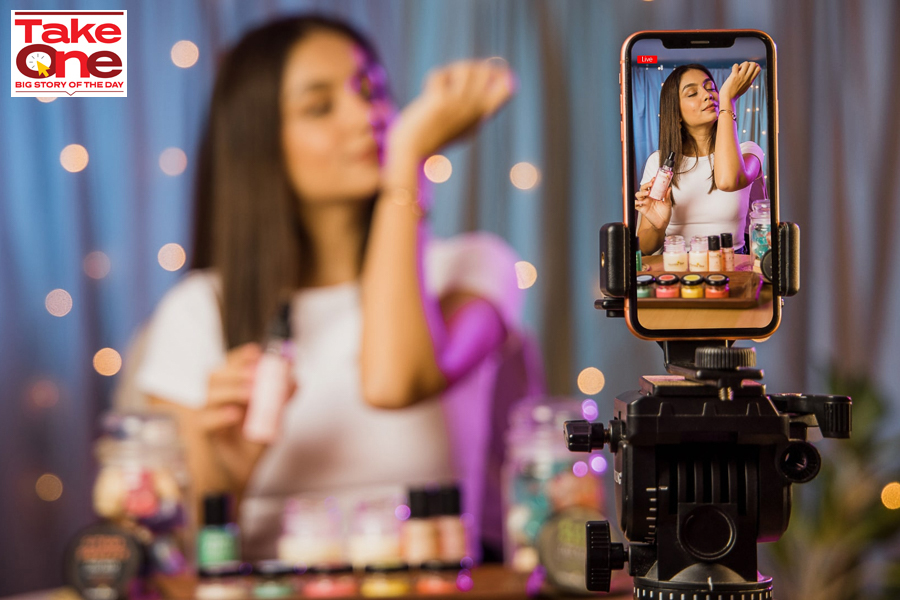 This “live commerce” trend is massively popular in China where it is projected to become a 961 billion yuan ($135 billion) industry this year, according to Chinese data provider iResearch


Soon after Unlock 1.0 was announced in July 2020 after the first wave of Covid-19 infections receded, Chitresh Parihar found himself in Bengaluru’s Indiranagar shopping for his “sartorial needs”. But stores in the otherwise bustling neighbourhood were still mostly shut. If open, they barely had a trickle of customers coming in. “I asked one shopkeeper what he was doing to stay afloat in these conditions,” says the 31-year-old.

“He said, ‘We did not take online channels seriously earlier, but now we have to do something on that front.’ I asked if he was thinking of making a website?” continues Parihar. “And he said, ‘We have spoken to a few vendors but that is not something that can generate results for us immediately, so, on customer’s demand we are providing them with WhatsApp video calls to showcase our products. Then whichever products they like, we send them payment links separately. After receiving the payment, we courier the products to them.’”

The shopkeeper’s response got Parihar, who was building Playlyfe—an enterprise gaming platform used to drive sales performance—at the time, thinking. This so-called live video experience was broken. Instead, something that would allow the shopkeeper to not just showcase his products using live video, but also interact with shoppers in real time, and enable them to select, purchase and pay for products all in one screen was needed, he recalls.

Fast forward to 2021 and Baaz, a B2B SaaS offering built by Parihar and his co-founder Ruben Gregory Savio, does just that—and more. An Indiranagar shirt store owner, for example, can now host live videos to hawk his products online in real time while simultaneously answering shoppers’ queries in real time. Think of it like a Zoom link that one uses to join a virtual meeting. There’s a messaging service built in too for shoppers who prefer to type out their questions, and an inventory management system. Customers can select a shirt in their size straight off the live feed, add it to their cart, check out and make the payment. All within the same stream window.

The results are eye-popping: Baaz’s add-to-cart rate is 40 percent, the conversion rate is 11 percent and critically, the return rate—“which is the biggest pain point for merchants adopting ecommerce”, says Parihar—is zero. In 2021, so far, the retailers on Baaz, largely from the fashion, home décor and beauty categories, achieved a collective Gross Merchandise Value (GMV) of Rs11 crore. 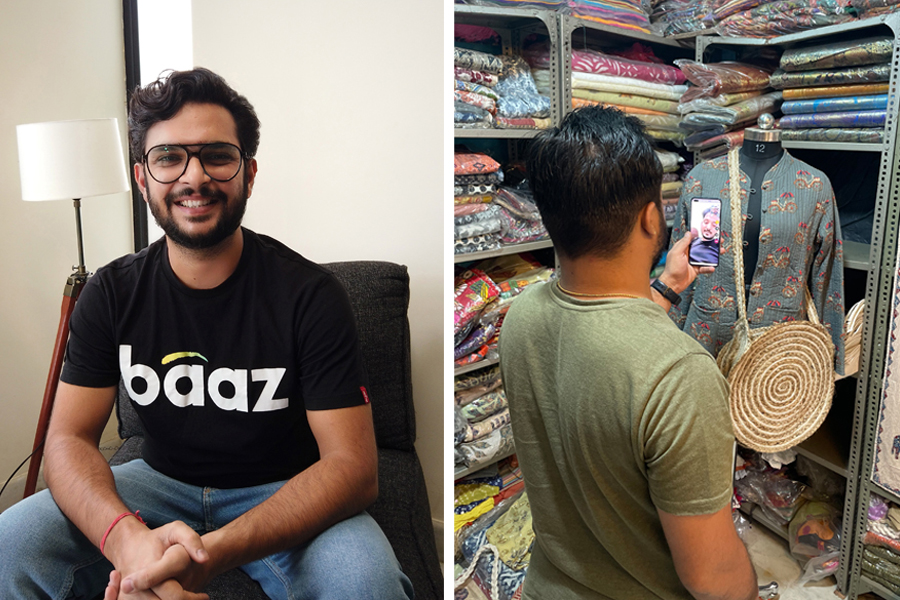 This “live commerce” trend is massively popular in China where it is projected to become a 961 billion yuan ($135 billion) industry this year, according to Chinese data provider iResearch. That is double the year-earlier figure and nearly one-tenth of all Chinese online shopping. In India, the trend is slowly catching up, thanks to the tailwinds provided by the Covid-19 pandemic.

To be sure, social commerce—which combines commerce with social media but is not necessarily live or “complete” in that different windows or applications need to be opened to, say, process payments or manage inventory—is already buzzing in India. Meesho, the Softbank-funded unicorn that focuses on social reselling, is the market leader. Resellers on the platform buy from large merchants and sell to followers on their social networks.

BulBul and Simsim are other key social commerce marketplaces. The latter for example, which was acquired by YouTube in July 2021, allows creators to post video reviews about products from local businesses. Viewers, largely hailing from Tier 2 and Tier 3 cities, can then buy those products directly through the app. According to RedSeer, a Bengaluru-based consultancy, the ecommerce industry will grow to $140 billion by 2025 up from $38 billion in 2020 and major social commerce players will contribute at least 5 percent by then. 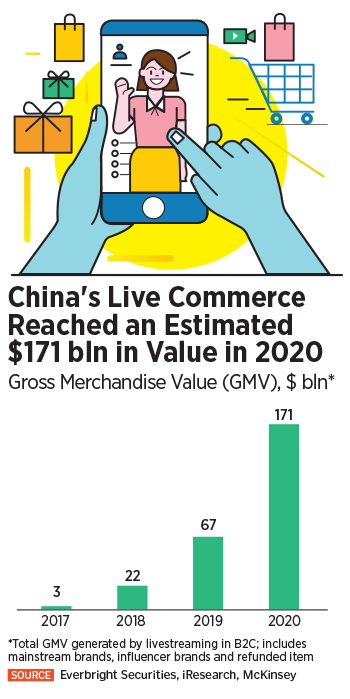 The idea of selling products through video demonstrations dates back to the 1980s when Home Shopping Network and QVC appeared on US televisions. While those demos were one-sided, new-age video shopping is live, allowing sellers and shoppers to interact with one another in real time. “It shortens the discovery to awareness to conversion cycle,” says Arijit Mukherjee, a former IBMer who set up SaahiHain, a Kolkata-based live commerce service for merchants, in July 2020.

“Unlike BulBul and Simsim, which are marketplaces, we offer a SaaS product to individual retailers,” says Kaizad Hansotia, co-founder and CEO of Swirl. A critical difference is the ownership of customer data. “Rather than give 30 percent share to marketplaces [be it BulBul, Simsim or even Flipkart and Amazon], retailers are telling us that they would rather invest that in building their own customer data. Part of that goes in buying software like ours, and the majority would go in acquiring customers, building content, paid ads to bring traffic to their website etc.,” explains Hansotia.

His platform, which was launched in January 2021, already boasts of 100+ clients including big-name ones such as ITC, Pantaloons, Aravind, as well as smaller D2C brands that rope in their own salespeople or influencers to peddle their products. Clients are charged anywhere between $99 to $999 per month (roughly Rs7000 to Rs75,000) depending on their requirements. Sometimes it even goes up to $10,000 per month (Rs7,50,000) depending on the enterprise’s usage, says Hansotia.

The startup recently raised $250,000 from strategic angel investors spread across the US, Middle East, Europe and Singapore. “Large enterprises want to build their own D2C channel. They do not want to depend on the Amazons and Flipkarts of the world because they are walled gardens. Sales on their platforms depend on whether they promote you. If they do not, your sales disappear, and you do not share any customer data either. There is no loyalty,” he says.

It is an idea Jason Holland of Firework concurs with: “From our research, we know that brands are willing to upgrade the customer experience and deploy a commerce connection to that experience within their owned and operated ecosystem. They are far more likely to convert that customer into a sale and a repeat customer, rather than if the transaction were to happen in a walled garden ecosystem like Facebook, Instagram or Amazon.” These “walled gardens” he says—a term that refers to any environment that controls the user’s access to content and services—do not care whether the brand in question makes a sale or not. They just care that someone converts, be it for brand A or brand B. The Silicon Valley-based startup raised $55 million in Series A funding backed by GSR Ventures, IDG, and Lightspeed, among others, in March. Clients in India include Fabindia, cosmetics maker Plum and several D2C brands.

Other startups are combining the best of B2B and marketplace models to offer a B2B2C experience, like the Kolkata-based SaahiHain. Customers can log on to a link provided by a merchant to log onto a live stream or they can log on to SaahiHain’s platform and choose to watch a stream from any merchant. “This allows for discovery also for the customer, which is important, especially when it comes to smaller, lesser-known brands,” says Mukherjee. Since it was launched in July 2020, SaahiHain has seen over 100 registered merchants use its services.

At present, the startup processes 350 orders per month with an average order value of Rs800. Merchants pay Rs3,000 in monthly subscription fees and also 5-10 percent of the sales they generate through SaahiHain. Baaz, by comparison, focuses on higher value items, and has an average order value of Rs1.3 lakh and charges merchants anywhere between Rs999 to Rs3,000 per month. 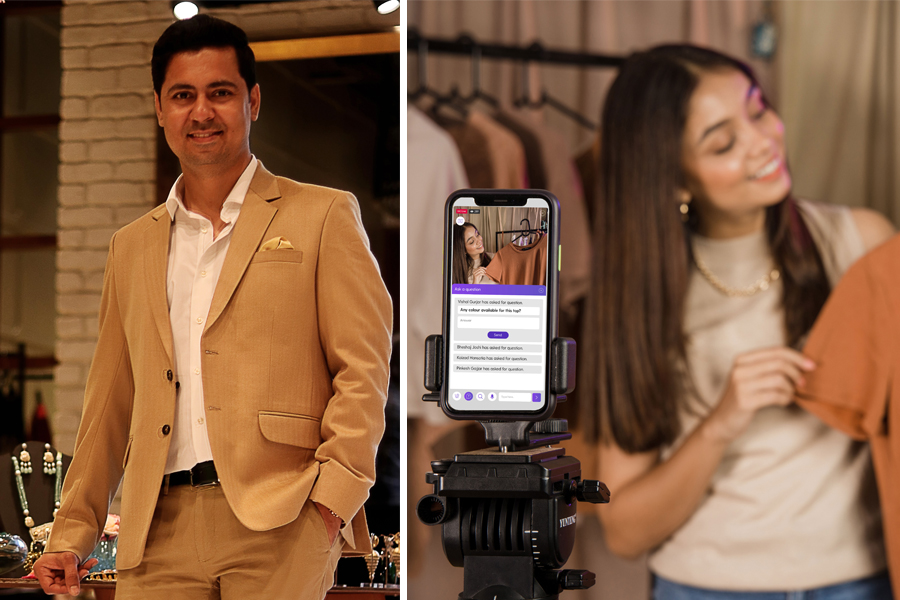 Swirl, built by Hansotia (pictured) and Bheshaj Joshi, is focused on roping in global clients

A New Approach to Ecommerce

While Amazon and Flipkart are good for buying basic necessities, startups and social networks will drive sales in categories like fashion, beauty, jewellery, home décor, and lifestyle products, which are recreational purchases, according to Connie Chan of venture capital firm Andreessen Horowitz. She dubs the term “shopatainment” where content, community and commerce converge.

In China, live video shopping is a core feature of the biggest ecommerce apps like Taobao Live, JD.com and Pinduoduo. Social video apps like Kuaishou and Douyin, ByteDance’s Chinese version of TikTok, also have shopping features. The share of Chinese online shopping done this way is set to grow to 20 percent by 2022, according to iResearch. Will India see similar success?

While it may be too early to make predictions, a blog post by Lillian Li, a former venture capitalist at Eight Roads Ventures, provides some insights. She writes about the factors that enabled live video shopping to take off in China, including an ecosystem of modern-day talent agencies to cultivate live-streaming talent and a fandom culture where influencers are looked up to as idols, so much so that fans are happy to support them. China’s “Lipstick Brother” for example, a beauty products influencer, sold $1.9 billion worth of goods in one day over a livestream. He has close to 40 million fans on Douyin, China’s version of TikTok.

Sajith Pai of Blume Ventures notes that these two factors are lacking in India; fandom especially is a cultural phenomenon and might take time to play out. In the meantime, believes his colleague Kunal Bajaj, reselling is to India what live-streaming is to China. “Reselling is the Tupperware sales model reinvented for the internet. And reselling (reimagined for the internet era) is ideal for serving the customers in India 2 and India 3, who find almost every step of the traditional ecommerce (search → pick → ship → pay) experience intimidating,” Bajaj writes in a blog. Reselling, because it is done by a trusted person, removes the friction in the purchase experience.

As the market builds out, Swirl’s Hansotia is focused on roping in global clients. “Live commerce in India is very nascent. It is roughly a $1 billion market, whereas in the US it is a $25 billion market,” he reasons. Moreover, live video shopping adoption is rapidly occurring in the organised retail space, which is most developed in the western markets, he says. “So we are automatically seeing more opportunities outside India. But it is a matter of time before India catches up.”

Tweets by @forbesindia
Photo Of The Day: Back to celebrating
In hard times, Afghan farmers are turning to Opium for security