Freshworks's Nasdaq IPO brings global credibility to the India-to-Silicon-Valley playbook and, sooner or later, a $100-billion-market-cap company will emerge from the Indian SaaS ecosystem 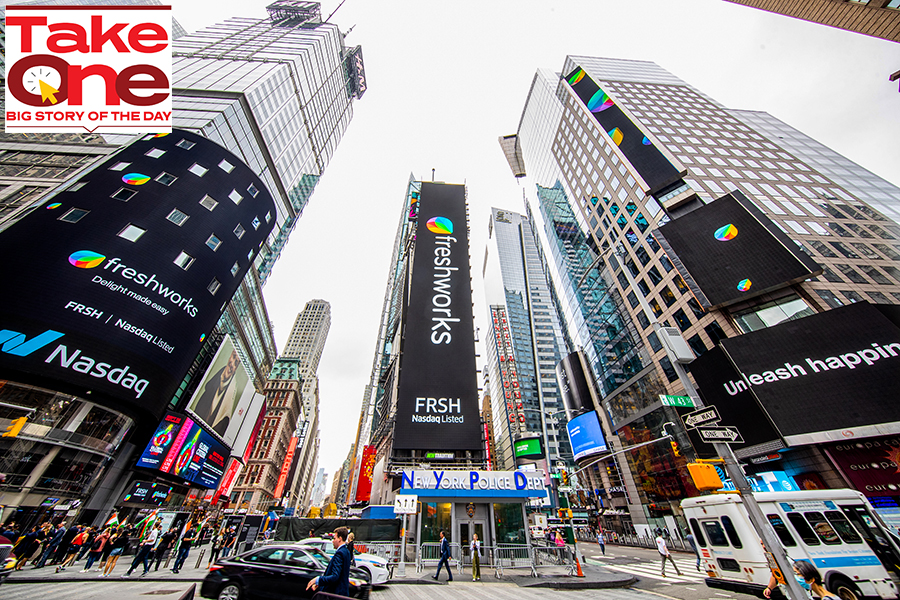 Freshworks became the first Indian-founder-led cloud software venture to publicly list in the US, on September 22, after a successful initial public offering on the Nasdaq stock exchange

When Manav Garg and Girish Mathrubootham teamed up to start a venture capital firm that would identify and support emerging entrepreneurs, they were coming full circle. It is also one illustration of how India’s software-as-a-service (SaaS) sector is ready for its next phase of growth. Garg, co-founder and CEO of Eka Software Solutions, and Mathrubootham, co-founder and CEO of Freshworks, had started out at a time when startups weren’t particularly fashionable in India and cloud software even less so. They had tackled many of their challenges on their own, without the Bengaluru-Chennai-Pune-to-Silicon-Valley playbook that has become the standard today. The one US-India role model that did exist, in the form of Zoho, was fiercely privately held by founders Sridhar Vembu and his family, whereas India’s startup ecosystem decidedly evolved around the VC-funding-led model.

Accel, which gave Freshworks its first million dollars, and continued to invest in the company, will now reap an outsized return on its investments with Freshworks going public on the Nasdaq and promptly surging more than 30 percent on Day 1 as the world recognised the value of its operating model. And founders like Garg and Mathrubootham—who have already been investing in other startups as angel investors in their personal capacities, with a combined portfolio of over 100 startups today—are now ready to scale up and institutionalise their efforts to pay it forward. The VC firm they announced in July, called Together, has been in the works for a year. At Together, they have teamed up with Shubham Gupta, a respected angel investor who has previously worked at Matrix Partners, Goldman Sachs and Nomura, and Avinash Raghava, a central figure—as an evangelist and community builder—in India’s cloud software products ecosystem. Not only has the firm has raised $85 million for its first fund, but also roped in some 160 established entrepreneurs and investors to actively mentor the aspiring startup founders that the firm will back. “Building a company is really hard, and scaling companies even harder,” Garg tells Forbes India in a recent interview. “So we thought there is a need for a firm that not only brings in capital, but also the help that entrepreneurs need, and somebody who can think from their point of view.”

“As a nation we are learning, and building templates. If Eka has taken 17 years and Freshworks has taken 11 years, what we are trying to say is, ‘can the next company come and do it in five to seven years’,” Garg says. When he started Eka in 2004, with a background in commodity trading and not in software products, Bengaluru was in its infancy as a startup hub and the world of software was still licence-based. “There was no help and I had to learn everything from scratch,” he says. Even as recently as 2015, with companies getting more familiar with cloud computing over the previous four or five years, “to create a world-class software products company from India was still a big challenge.”It took another three years for the SaaS ecosystem in India to figure out good templates, with more VC involvement, for building hybrid models that tapped the availability of raw talent in India and a go-to-market strategy in Silicon Valley.“The SaaS ecosystem is definitely undergoing a transformational evolution, and we feel that this is happening across products, use cases, markets and so on,” says Venkatesh Peddi, an executive director at Chiratae Ventures, a VC firm in Bengaluru. In the last five years, for example, the number of active SaaS companies has doubled to more than 1,000, and the revenues of the sector have grown five-fold, according to an estimate by Zinnov, a consultancy. Chiratae and Zinnov collaborated on a study of the Indian SaaS sector and project that, between 2025 and 2030, the software products companies from India will surpass the IT services sector by market value. And the market value of India’s cloud software companies could touch as much as $1.8 trillion by 2030 if they grow aggressively. By 2025, Indian cloud software companies could cater to 10 percent of the global SaaS demand at current growth rates of about 50 percent every year, according to a report the two firms released, based on their study. The sector could even grab almost a fifth of the global demand if it grew more aggressively at about 70 percent every year, according to the report. That means the sector’s revenues could go from about $5.3 billion to between $42 billion and $75 billion over the next five years depending on how fast the sector expands. And the number of jobs in the sector is also expected to rise from about 50,000 people today to add about 200,000 net new jobs in that time. There are about a dozen unicorns in the sector today and another 150 to 200 companies that are small but growing strongly, with revenues ranging from a million dollars to anywhere between $10 million and $50 million, Praveen Bhadada, managing partner for emerging technologies at Zinnov, tells Forbes India. And VC companies are lining up to fuel this growth. Over the last five years, some 600 VC firms have invested more than $6 billion in India’s SaaS ecosystem, Zinnov estimates. That about $4 billion was infused into the sector over the last three years shows that the funding is increasing faster, according to the report. Freshworks’s successful IPO—the company’s shares surged over 30 percent on debut, making it an almost $15 billion enterprise by market value—makes it a flag-bearer of Indian SaaS. More significantly, it also puts to rest apprehensions about whether it’s possible to build world-class software businesses largely out of India. Freshworks’s customers include Nasdaq itself, and also American Express and MultiChoice.

Bhadada at Zinnov points out that starting from Zoho, which is 25 years old, and the next set of companies that came up over the last 10-12 years—such as Freshworks, Icertis and Druva –have the advantage of continuing to have big chunks of their operations in India, including R&D and sales and marketing. Mathrubootham has also pointed out that the India advantage allows Freshworks to throw more people at product development. And even on the sales front, about 50 percent of the company’s sales origination happens from India. By keeping much of these functions in India, the companies get the advantage of tapping into the 800,000-strong digital tech talent pool in the country and keep overall costs down compared with the larger multinational rivals, Bhadada says. “So if a Freshworks competes with a Salesforce.com, it has those two distinct advantages, assuming everything else is equal,” he says. The larger, foreign companies, are not unaware of this, of course. Salesforce has a strong development team in India, and other rising cloud software companies from around the world are looking to India as well. Atlassian, for example, a $2 billion revenue, Nasdaq-listed Australian company that makes team collaboration software, has close to 1,000 employees at its Bengaluru-based global development centre. And the centre has emerged as Atlassian’s fastest growing location. While much of the Indian SaaS sector is focussed on the US market, there are also highly specialised companies that are emerging, which are finding customers in India. “We work with five telcos in India and Asia Pacific,” says Rohit Choudhary, co-founder and CEO at AccelData. The San Jose company is a leader in the area of ‘data observability’, which, as the name suggests, allows large companies to get a better view of what’s happening with their terabytes of data and extract more out of it. AccelData has also found customers in India’s growing fintech scene, like PhonePe. 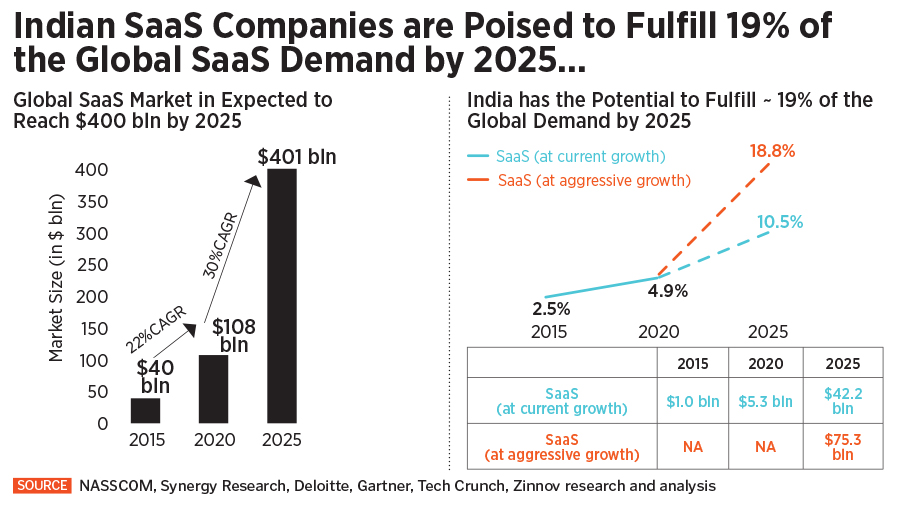 Garg gives the following analogy. The IT services industry also went through a similar kind of a cycle of starting small and finding its feet to becoming the $190 billion industry that it is, with companies like TCS and Infosys competing with the world’s biggest IT companies. When companies such as Accenture and IBM set up and grew their Indian workforce, there was initially the apprehension that the Indian IT companies would lose their advantage and couldn’t rival the management depth of the multinationals also so on, he says. Today, however, TCS is among the three biggest IT services provider on the planet.

For the SaaS companies, “I think for me, the key would be now from here, once you've proven this thesis that Indian businesses can be global, how do you convert a company into an institution?” Therefore, “whether we can rival Salesforce, definitely, I don't think that's even a question”, and the business reason behind that is that the realm of business-to-business software is not a winner-takes-all market. Even in the customer relationship management market, which Salesforce pioneered, the company has about 19 percent to 20 percent market share, he points out. And the overall SaaS opportunity is massive because, even today, only about 34 percent of the world’s overall IT landscape is on the cloud, with the other two-thirds remaining to be grabbed. Freshworks’s IPO reflects the possibilities of the future and there will be many more companies that are going to be of such scale, and even become bigger to rival businesses like Salesforce, he says. What is needed for the next stage of growth is to give this hard-earned success an institutional form and management depth, he says. Because “money isn’t a constraint any longer, and market isn’t a constraint any more”. If the way Salesforce has grown is an indication of product-led growth, that starts with one and builds out on adjacent opportunities, “I think we'll see $100 billion market-cap SaaS companies coming out from India for sure,” he says.

Tweets by @forbesindia
Netflix acquires the whole works of Roald Dahl
Photo of the day: Horn, not ok, please