By providing data and insights to both startups and venture funds, RedSeer Consulting has emerged as one of the top homegrown consulting firms in India 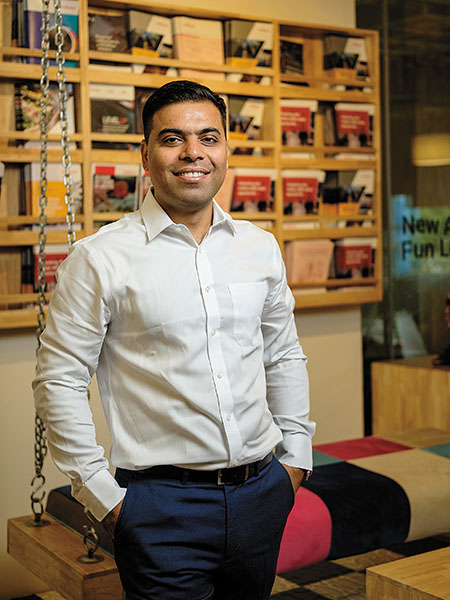 Anil Kumar owes it to two people, whom he declines to name. People who jumped the ship even before it set sail, leaving Kumar to navigate the turbulent waters alone. Frankly, he had little choice.

Early 2009 was all about gloom and doom. The global economy was reeling under recession and Kumar, somewhat disillusioned, had quit his consultant job at Zinnov. He was contemplating whether to take up an offer from a global consultancy, a dream job of sorts, especially when times were tough, as he believed that large firms could be restrictive. Kumar believed that he was better off navigating the wilderness than being a caged bird.

Two of his seniors at IIT-Delhi, both executives at global consultancies, mooted an idea: That the trio float their own consultancy. They felt capable of winning a turf war with a bunch of homegrown competitors such as Zinnov, Technopak, Feedback Consulting and Evalueserve among others, apart from global peers like KPMG, Deloitte, PWC, EY, Booz, Bain & Company etc.

Excel sheets were drawn. A turnover of a couple of crores in the first year was projected. RedSeer Management Consulting, as they called the firm, was ready to roll. Kumar would lead the charge until the other two quit their jobs.

“Most of the people I discussed with said not taking up the job was a bad idea,” says Kumar.

The well-wishers were possibly right. Through their lens of caution, they foresaw a downward spiral—hiring consultants was, after all, a discretionary spend that companies were unlikely to indulge in during an economic downturn—that Kumar completely missed. In the first few months, RedSeer could muster only one project, worth a couple of lakhs. The excel projections looked like a pipe dream and Kumar’s colleagues indicated their aversion to board a rocky boat. Kumar was caught off guard. “My idea was, people would start and I would join them. I never saw it as starting my own company. Mentally, I was not prepared to run the ship alone,” he recalls.

Fast forward to 2020, neither is Kumar that reluctant CEO nor is RedSeer the minnow waiting to be trampled by hefty rivals. Kumar has identified a sweet spot—startups and venture capital firms. RedSeer, he says, is sitting on tomes of data, based on primary research. Market size, market share, net promoter score or competitive intelligence, Kumar claims that RedSeer knows it all with reasonable accuracy, thanks to its elaborate data collection mechanism encompassing tele calling, mystery shopping, web crawling etc.

The overarching idea is to offer high quality “actionable insights” to its clientele.

“The biggest value-add of RedSeer is its startup-first approach. For large consultants, working with startups is both a mindset and a ticket size issue, but RedSeer has offerings across the board. You can either use its reports, which are extremely useful, or do a custom engagement with them,” says Ankit Nagori, co-founder of Curefit.

In the process, Kumar has built a bootstrapped and profitable company. Kumar says RedSeer will clock about ₹80 crore in revenue in FY20, with margins hovering around 30-40 percent. In fact, revenue has doubled over the past year. At the heart of it is RedSeer’s quest to do much more than strategy consulting.

“I tell my clients that we are the SOS button. Press us whenever in dismay,” says Kumar with a laugh. “We now call RedSeer a solutioning firm. We faced this challenge a lot of times in explaining what we do. We do market research, competitive intelligence, slides, analysis, high quality financial modelling, we have started doing due diligence. We do everything,” says Kumar.

RedSeer has evolved from a one-man show in 2009 to a 200-odd member team in 2020, from a nondescript office in Koramangla to occupying three floors, replete with chic decor, in Bengaluru’s startup corridor HSR Layout, from working for free to commanding a price.
What hasn’t changed is Kumar’s willingness to “do everything” and do it fast, a spirit that has constantly opened new doors, including RedSeer’s foray into primary research and subsequently, championing startups, its biggest differentiators.

Kumar was soaking in the sun on the beaches of Gokarna with a friend, celebrating RedSeer’s survival, thanks to projects he bagged from the likes of Base Batteries and Saint Gobain. The reverie was short-lived. Sharma, who had called on a Saturday, wanted RedSeer to start work next Monday. It was a lucrative project, but RedSeer didn’t have enough resources to execute it. Then a barely three-member team, Kumar didn’t even have enough people to get the job done. But, he also wasn’t the one to say no to work.

“I took a bus to Bengaluru that very night. I also called Ujjwal (Chaudhury, RedSeer’s first full-time employee) to put together a team,” says Kumar.

On Monday morning, Kumar walked into an office of 10-odd people. “Ujjwal went to all the job portals and picked up the phone numbers of job seekers. His first question was, do you have a laptop? Only if someone said yes, he would carry on the conversation. We couldn’t afford to give laptops,” says Kumar.

Being scrappy is a badge Kumar wears with pride. At RedSeer, they have bought a momo vendor’s entire stock to coax him to take calls for RedSeer since he spoke Chinese. Kumar struck a similar deal with an elderly couple, who ran a small restaurant, because they spoke Portuguese.

The Parthenon project, says Kumar, went well. It significantly stepped up its engagement with RedSeer. And, along came a realisation. It was tough to ignore the might of the likes of a Boston Consulting Group (BCG) or a McKinsey.

“You don’t want to be the third best or fourth best in a game. It doesn’t matter how well we try, we will always be a second or third tier consulting firm,” says Kumar. “You need to put up something where you can service the needs of the industry in a different manner. Parthenon came to us because anybody else couldn’t do it. The rates we were charging them were 4-5x of what others would. That Parthenon engagement was the trigger for us to shift focus from strategy consulting to market research.”

Instead of locking horns, Kumar chose to partner with the high and mighty of consulting. While such engagements didn’t set the revenues soaring immediately, the ripple effects were felt in a few years, starting 2014. This was a time when startups were booming. In an attempt to strengthen their top deck, well-capitalised internet companies started hiring people from the likes of BCG and McKinsey among others. And all of them knew RedSeer from their previous jobs.

Ever since, RedSeer has slowly and gradually woven itself into India’s startup fabric. In the process, the firm has courted controversies. For instance, Amazon, without taking names, denounced RedSeer’s market share reports that put Flipkart ahead of Amazon. People also question its data collection techniques.

Kumar is unfazed. “Data authenticity is not the thing that we want to put across as the main point. The ability to take a nuanced view of the industry is what we bring in and data is only one part of it,” he says.

Essentially, Kumar wants to leverage the lack of authentic data on private companies. The pitch is simple—investors can use RedSeer for a bird’s eye view of how their portfolio companies stack up against competition, as well as how the overall market is panning out while startups can engage with RedSeer on business strategy.

“Problems which we have solved for the past 7-8 years for the big management consulting firms is the exact skillset we are leveraging to solve the problems of the startup world. In a data-deficient market, we give hard-to-find insights and competitive intelligence,” says Kumar. “One cannot be in the dark for so long about market realities and their portfolio performance,” he adds, tacitly referring to the WeWork fiasco.

Kumar’s idea has takers. RedSeer has expanded operations to the Middle East and Southeast Asia. Last September, it entered into a revenue-sharing partnership with London-headquartered consulting firm OC&C, where the two businesses will share resources and infrastructure to service clients. Is a takeover by OC&C on the anvil? “Not at all,” says Kumar, who is chasing ubiquity with a single-minded devotion. “Every diligence report should have a note from RedSeer, irrespective of whether we have prepared the report or not.”

● This feature was written before the Covid-19-triggered lockdown began