Britannia: That ting you do 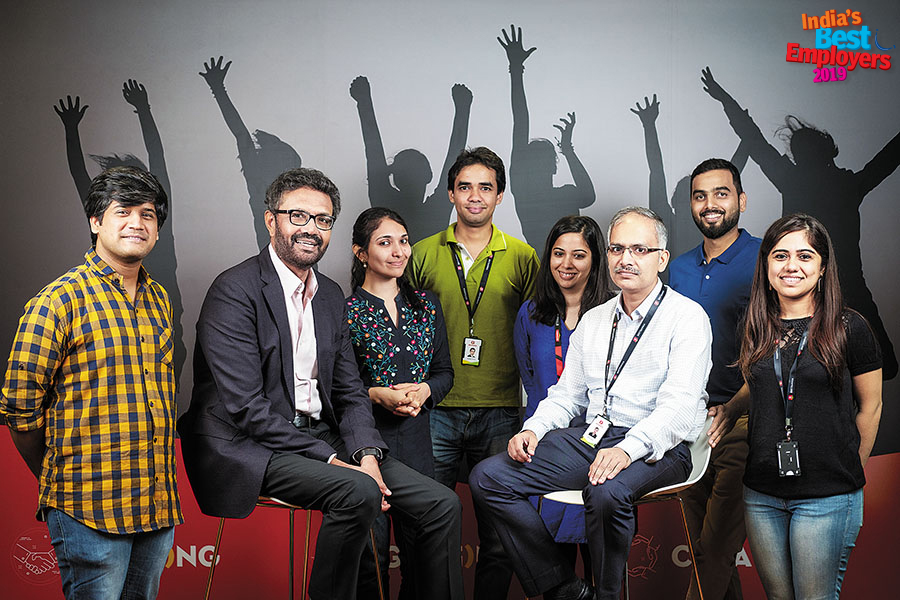 Varun Berry (seated, left), managing director of Britannia Industries, and Ritesh Rana (seated, right), head-human resources, have ensured that approachability is not an issue in the company
Image: Nishant Ratnakar for Forbes India

At Britannia Industries, “ting ting ti-ting” is much more than a popular jingle that became synonymous with the brand. At the century-old packaged food conglomerate, it is a way of life. So much so that ask Ritesh Rana, head-human resources, what the company offers its 2,000-odd employees and pat comes the reply, “We make tings happen. Inviting, igniting, creating and respecting—those are the four tings of our culture.”

At Britannia, a ₹65,735-crore company (by market cap as on July 22), they practise what they preach. The company has a culture of hiring former executives, which makes it “inviting”. Rana himself came back in 2012 after stints at Intel, GE Money and Max NewYork Life Insurance. So did some of the other senior executives such as Arvinder Singh, head of quality, and Kannan SN, head of taxation.

Next, Britannia is all about giving employees responsibilities early, which makes them want to prove their mettle and to do more than their official mandate, an attribute that makes Britannia an “igniting” workplace. “We are not about big leaps, but small improvements every day. It is getting more out of every penny that we spend. We are entrepreneurial and connected. It’s more about walking in and talking rather than sending emails,” says Rana.

He adds, “The next pillar is creating. We create careers by providing the right kind of input, learning on the job, flexibilities and a wide range of responsibilities. The last pillar is respecting, which is about doing the right thing. It is about integrity, respecting individuals.”

Much of this has also to do with the vision of Varun Berry, managing director at Britannia Industries, who is known to have his ear to the ground. “While it is a large company, it has the heart of a small company,” says Berry, a PepsiCo veteran who joined Britannia in 2013 as chief operating officer. Berry was appointed managing director in March 2014.

One of the first things that Berry did after taking over was to dismantle the hierarchical setup at the firm. For instance, the second floor of the erstwhile three-storeyed Britannia headquarters on Old Airport Road in Bengaluru—the company has since moved to a new office in Whitefield—was home to the company’s top brass when Berry took charge. He ensured that the floor no longer remains the hallowed chamber of the building. 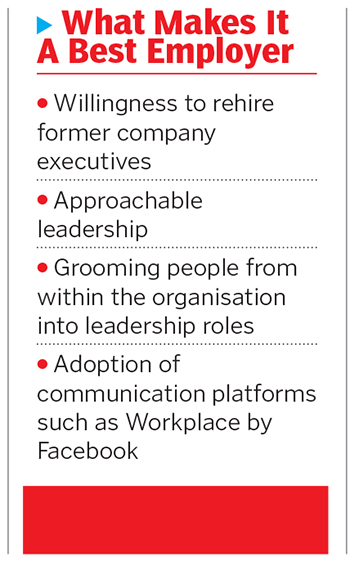 “The first thing we changed was this whole thing about approachability. We opened the door and split that second floor to different parts of the office so that there was no corner where only the senior people sit. Everyone was dispersed and everyone now sits with their own people and team,” says Berry.

Berry is also a big proponent of promoting people from within the organisation than making high-profile hires from outside.

The company has also embraced technology to communicate with its workforce, especially the younger lot. For instance, about a year and a half ago, Britannia adopted Workplace by Facebook and artificial intelligence-powered chat bots to drive communication among the rank and file.

Says Rituparna Chakraborty, co-founder and executive vice president at TeamLease, “For an organisation looking to stay relevant and grow into the future, while one should respect the past, it should plan itself keeping in mind the future. The fact that Britannia has been around for 100 years... it must have been doing something constantly right.”

The cultural shift at Britannia is, however, still a work in progress. Says Berry, “We used to be a siloed organisation. We have come together. From 3 on 10, we have moved to 6-7 on 10, but certainly not a 10 on 10. Certain pockets need to be impacted. Also, there has been a dramatic improvement in team work, but we are not completely there. Speed of execution has moved up considerably, but again, 7-8 on 10. We still have an opportunity to move up to a perfect organisation stature.”