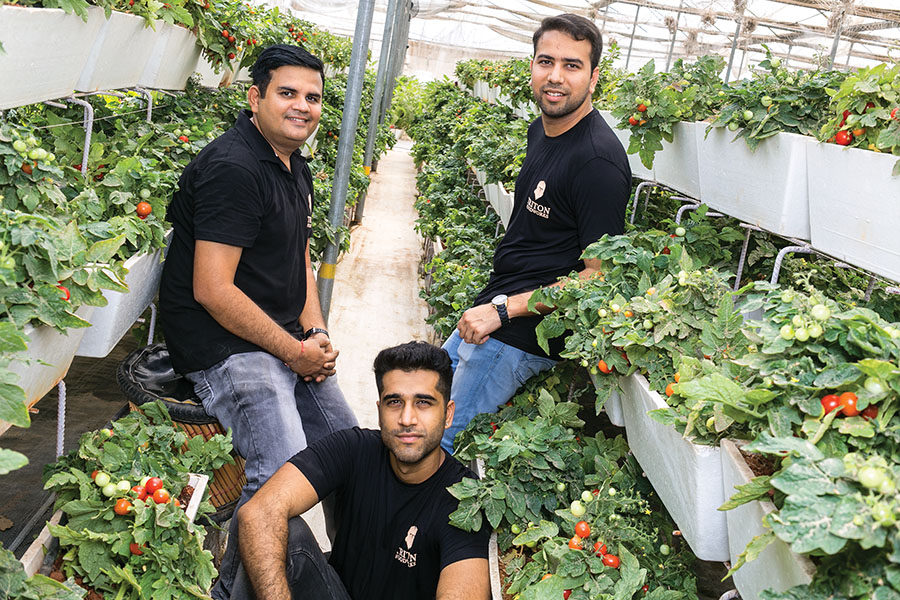 When Ullas Samrat and Dhruv Khanna spoke after a long hiatus in the summer of 2014, they had a lot to share. The childhood friends had drifted apart when Khanna relocated to Singapore for a master’s degree in 2013, while Samrat stayed back in Delhi to work in his family’s lighting business.

On that call, they mostly spoke about where their lives were headed. Samrat was figuring out a way to keep his mother, who suffered from a lung disorder, away from Delhi’s air pollution. His plan to shift his mother to a farmhouse on the outskirts was struck down by doctors—pesticides, soil and dust at the farms would do her no good. This got him thinking about farming without soil. Khanna, stationed in Singapore, was building his own startup, one that aspired to make TVs smart.

A few minutes into the conversation, both figured they wanted to do something more “meaningful and impactful in life”. Working on a sustainable farming module could be a good starting point, the friends agreed.

“When I told Dhruv about soilless farming, he called me back in three days and said there are a few startups in Singapore [like Comcrop] doing the same. Dhruv said he would be visiting India in a couple of months and if we could figure out a pilot by then, he could work on his startup from Delhi and relocate,” says Samrat, 28, in a phone interview.

Khanna, also 28, did return in September. By then, the duo had sold their dream to three others—Devanshu Shivnani, Deepak Kukreja and Vaibhav Batra. In October they set up Triton Foodworks and started out by growing strawberries hydroponically—without the use of soil, in a nutrient-rich medium using water as solvent—on a plot in Delhi’s Sainik Farms, where Samrat’s family owned some land. The yield was heartening—eight tonnes, which fetched them a profit of about ₹3.5 lakh.

The five founders, all in their twenties, were elated as the dream to create something impactful had started to take wing. Hydroponics was the way forward for sustainable agriculture, they concluded. First, hydroponics requires 60-80 percent less water than conventional farming. Second, one can practise high-density cultivation with hydroponics. Third, since there is no soil involved, there is no scope of lacerating the soil with pesticides and other chemicals.

Explains Kukreja, 39, “In soil cultivation, plant spacing has to be maintained because the plants compete for minerals, but here, since we feed the plants with precision, it gives us the scope to increase plant density. We can also grow vertically for small and compact plants like strawberries, lettuces and herbs.”

He adds, “In conventional farming we have to do crop rotation to avoid soil erosion and avoid problems like nematodes and pests, but hydroponics gives us the advantage to cultivate a certain crop throughout the year.”

In hydroponics, since there is no soil involved, the farmer is free to cultivate the same crop repeatedly

However, the company’s wings were soon clipped by the Municipal Corporation of Delhi, which razed a greenhouse structure they were starting to put up. “In Sainik Farms, construction of new houses and digging borewells for residential use is not permitted due to an ongoing case, but there is no restriction for agricultural activities,” says Khanna, adding that they were asked for bribes.

“When we refused, the Municipal Corporation of Delhi demolished the greenhouse without giving any notice. When we complained to the local MLA, a few days later a junior engineer from MCD came to apologise and told us he thought we were building a house.”

The team was shaken to the core, the immediate fallout of the corporation’s action being Batra’s exit. Next, Shivnani chose to take a break and pursue an MBA. Meanwhile, an institutional investor who had evinced interest in the firm also withheld investment. The flight, in effect, was grounded even before it could take off.

“More money had to be pumped in and we were all very tense. Everyone had this awkward conversation at home where we asked for more money and our parents were not convinced this time. They had already given us money to kick-start the operations,” recalls Samrat of the tumultuous days.

However, Samrat, Kukreja and Khanna decided to stay put. The plan was to take up hydroponics consultancy work for about a year or two, make enough revenue and plough it back into their firm to continue with R&D—the firm had set up two research and production facilities in Rohini in Delhi and Wada near Mumbai. Between January 2016 and mid-2017, the company executed about five projects in Delhi, Karnataka and Maharashtra —which fetched them about ₹1 crore in revenue—simultaneously working on the research facilities.

“The idea was to source as much raw material as possible from local vendors, design the systems ourselves and get them made by local manufacturers,” says Khanna. Adds Kukreja of some of their innovations, “Instead of plastic moulds to hold the crops, which cost about ₹25 lakh for an acre, we use styrofoam, which is not only cheaper but also keeps the temperature low. The cost comes down to ₹15 lakh.” The team has also developed a high pressure fogger, which sprays smaller water droplets compared to conventional fogging systems.

Late last year, the company stopped consultancy work and turned its attention to developing their own farms. To consolidate operations, it shut down their research facilities and took up a five-acre plot in Manesar, where it grows different varieties of tomato, strawberries, lettuce, eggplants and pepper among other plants. The plan is to stock the produce in retail outlets in Delhi under the ChopChop brand as well as sell directly to hotels and restaurants. The current fiscal is expected to fetch the firm ₹1 crore in revenue.

“There has been a lot of exposure around food and food experimentation has become big in urban markets. Also, the eating out market has grown and exposed a lot of urban centres to new tastes and ingredients, which have found their way into people’s kitchens. Hence, this category is finding significant retail shelf in outlets, which makes startups in this space interesting,” says Ankur Bisen, senior vice-president at retail consultancy firm Technopak Advisors.

The greenfield opportunity in hydroponics has also attracted businesses such as Letcetra Agritech, BitMantis Innovations, Junga FreshnGreen and Future Farms.

The trio of Triton is in no mood to let go of the opportunity.

Tweets by @forbesindia
The evolution of family offices
A living spectacle: The popular landmarks of Asia