Apart from sharpening their soft skills and offering technical know-how, startups like Scaler Academy and Masai School are helping graduates land that coveted job after completing their course 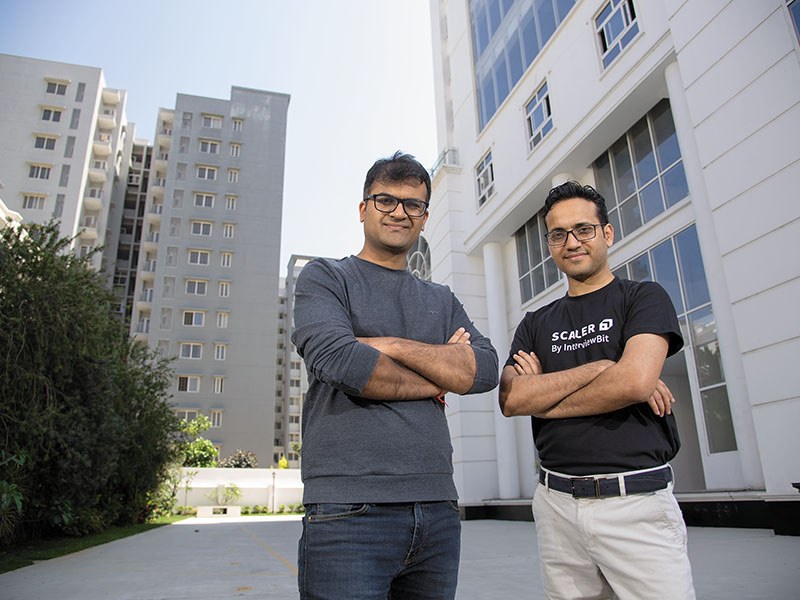 Abhimanyu Saxena doesn’t mince words. “Ninety percent of the technology needed in a high-end technology company isn’t taught in the universities and 90 percent of what is taught there has no relevance,” says Saxena, co-founder of Scaler Academy, a startup that runs online computer programmes for fresh graduates and working professionals, with a promise to get them a job. Saxena isn’t launching a diatribe. Depending on who you ask, about 50 to 90 percent of India’s engineering graduates aren’t fit for a job. The thousands of private engineering colleges that mushroomed across the country in the heydays of the information technology boom in the 1990s, selling the dream of a quintessential good life, have begun to falter. So much so that they are failing to fill seats.

According to the All India Council of Technical Education (AICTE), the number of engineering seats in the country shrank from about 19 lakh in 2014 to 14.66 lakh in 2019. About 83 engineering colleges approached AICTE last year, asking for permission to shut shop. The meltdown, to a large extent, has been triggered by their inability to ensure jobs. Late 2014, Saxena, a former executive at Fab.com, teamed up with Anshuman Singh, who had earlier worked with Facebook and Directi, to launch Interview Bit, a startup that would make students job ready.  “People often don’t know what to expect at interviews with these large tech companies,” says Saxena. Interview Bit became that free platform where aspirants could solve probable questions and have their acumen assessed. At the backend, a team of in-house recruiters would track their performance. “If you get on to their (the recruiters’) radar, they will reach out and check if you are looking out and then connect you with companies,” says Saxena. By 2019, Interview Bit, a bootstrapped and profitable venture, had 10 lakh registered users, of whom at least 10,000 people got a job at 400 companies, including Amazon and Uber. The company clocked $2 million in annual revenue in FY19.  “You won’t believe how much a company can pay to get the right talent. The success fee can go up Rs 10-20 lakh,” says Saxena. A highly tech-enabled recruitment service as a revenue model was kosher, but it soon dawned upon Singh and Saxena that there was a bigger opportunity to be taken—skilling the potential workforce. About 85 percent of the people registered with Interview Bit were from top engineering colleges in the country. These were those who anyway had a high probability of cracking the so-called big tech interviews. They were somewhat privileged—albeit hard-earned—to have the access, mentors and a vibrant peer group.  “Hence, the delta that we were creating was small,” says Saxena. A lot could be done with students from Tier II or III colleges, who might have the acumen but lagged behind in privileges.
Masai School co-founder yogesh Bhat(left), Prateek Shukla and Nrupal Dev(right) help people learn coding with the promise of a job on course completion

In early 2019, Interview Bit moulded itself into Scaler Academy. It would be run like a college—replete with training, mentorship and placement service—but way more efficient in documenting a student’s progress. For instance, Scaler Academy goes to the extent of tracking keystrokes and facial expressions during a class. The students would spend the first six months learning, while the next six will be spent in sharpening their soft skills and securing placement. Scaler Academy, says Saxena, wants to create top notch tech talent to be hired by the best technology companies. Hence, it has a strict screening process. “If you want to make, say Google-quality engineers, it cannot be from scratch in six months. We don’t have any magic wand. For someone to achieve the desired output in six months, we need a strong base, which means you have to have some quality intake. This is hard stuff. I won’t say learning technology is easy,” says Saxena. Building the business isn’t easy either. It’s expensive to train a student, as much as Rs 1 lakh. “Top instructors from places like Amazon or Google are expensive. We have full-time instructors from these companies who quit their jobs to teach with us. If you want the best people, you have to spend money. We also pay the mentors, people with years of experience in the industry, and then there are teaching assistants, who are relatively new to the industry” he adds. The company has 2,000 students across seven batches. More than 75 of the 200 students in the first batch have already been placed. The company raised $20 million from Tiger Global Management, Sequoia Capital and Global Founders Capital in January to support its audacious vision. “Eventually we want to replace the universities,” says Saxena. Prateek Shukla loves narrating Sumanta’s story. For Sumanta, the razzle dazzle of the big city was blinding. And it gave him the blues. His meagre earnings restricted him to being a distant spectator to the affluence around. He wanted much more than the Rs 15,000 he made every month as an operations executive at a Bengaluru-based startup, much of which was sent back home to his farmer parents at Balasore in Odisha, forcing him to share a two-bedroom accommodation with 10 others. Sumanta had lived under constraints for years. He drove a tractor to pay for his school fees and spent nights taking calls at a business process outsourcing unit to pay for his Bachelor’s degree in science. He wasn’t averse to slogging hard. But he found most doors shut on him in the Silicon Valley of India, largely because of his lack of technical acumen. About a year ago, Sumanta took a leap of faith. He quit his job and enrolled at Masai School, a startup that helps people learn coding, also, with a promise of a job on successful completion of the course. “He literally parked himself on the campus for six months and visited the apartment on weekends,” says Shukla. The toil has paid off. Sumanta currently works at a startup as a front-end developer, making Rs 50,000 a month. Shukla, the co-founder of Masai School, says Sumanta isn’t a one off.  Masai School, he explains, has groomed several others—many of them are school dropouts, some didn’t even go to a college, barely a handful have computer science degrees—into software professionals. “In the second batch, we had a school dropout. His family called me to check if their kid, who studied till class 5, actually got a Rs 7.5 lakh per annum software engineering job,” says Shukla. Launched in June last year, Masai School has 125 students across four batches. The firm has raised $200,000 from India Quotient and a clutch of angel investors. Software skilling startups such as Scaler Academy, Masai School, AttainU and Pesto Tech among others are gradually gaining prominence. Their USP? A solid foundation in technology, and the assurance of a job, where most colleges have failed. “Ideally, colleges should do this. But placement percentage, especially in engineering colleges, is abysmally low. But, everybody is throwing in money. They spend Rs 3-4 lakh on college education,” says Divyam Goel, founder and chief executive at AttainU. Saxena of Scaler Academy reckons, “Placements are poor because their (colleges) incentive is met when you take admission to a college.” For these startups, revenues are directly linked with the outcome; that is they make money only when the students start earning. Essentially, they work on an income-sharing agreement (ISA), which mandates the student to pay a pre-decided fee to the firm only after they land a job. “The DNA of the institute should be aligned with the success of the students, which will only happen through an income-sharing agreement,” says Shukla of Masai School. The model has gained momentum globally thanks to the soaring popularity of Lambda School in the US. There are challenges aplenty. These startups are essentially challenging the status quo. In India, a formal degree, is still the top priority for students, while such courses are looked upon as means to acquire additional skills. “While the tide may turn in the years to come, it is highly unlikely that they will replace the formal education system. In that case, these companies will be fighting for wallet share and remember, ISA or not, these courses are expensive. Several students are already on an education loan,” says a venture capital executive declining to be identified. Also, given the rapid evolution of technology, it becomes imperative for these startups to keep revising their course to avoid the slump that has riddled the likes of NIIT and Aptech in the recent past. Both businesses, which scaled great heights offering technical courses in the rah rah days of IT services in India, have seen sharp decline in popularity of late. “They couldn’t keep up with the times,” says the executive cited above. “We are a job-centred university. Whatever the industry wants, we give that,” says Saxena of Scaler Academy. The focus of this university is to get them jobs. Any knowledge that doesn’t get jobs is irrelevant for us.”