Strong cloud-based enterprise software product companies are emerging in India, but are quickly moving to the US, drawn by customers, ecosystem and the IPO dream 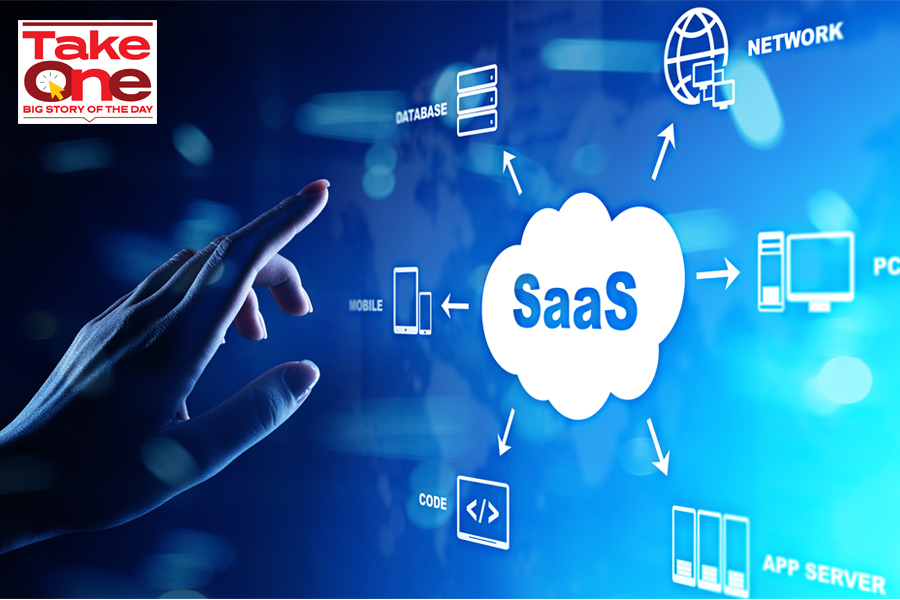 Postman started as a side project for Abhinav Asthana. He was the technical founder of an earlier startup after finishing college in India, and was grappling with the complexities of making disparate pieces of software connect with each other. The software that do that are called application programming interfaces (APIs) and they are becoming increasingly important to software development.

Eventually, the side project became the main interest, after an early piece of software that Asthana put up on the Chrome Web Store drew a lot of attention from software developers, and suggestions about features that could be added to it, and how it could be expanded. That gave birth to Postman in 2014, with backing from early stage investor Nexus Venture Partners. By 2016, Postman had employees in the US, and Asthana himself moved to San Francisco in 2017. This year, Postman raised $150 million in its series C funding at a valuation of $2 billion. Postman is one of a new generation of software product companies that started in India, but quickly moved to the US. Often they are companies that build software as a service (SaaS) for businesses. While they are building world-class software products and platforms, typically on the cloud, the move to the US is almost inevitable. Early-adopter customers are Americans, and the ecosystem of product development is still several years ahead in Silicon Valley. The big change in India, however, is that the combination of talent availability and early funding, and the broader interest in software development—from ecommerce giant Flipkart to Dream 11, the fantasy cricket gaming startup—has matured to a point where software product companies are emerging that are able to make the transition to becoming global companies. In the process, not only are they attracting investor interest at an early stage in India, but are going on to successfully raise money from US backers at the growth stage, says Sameer Brij Verma, a managing director at Nexus Venture Partners. Some of these companies have created new categories—like solving a specific set of problems within the API software space or automating how software applications talk to databases—or are among the leaders in categories. So they are attracting a lot more international capital. “With Postman we led series A; series C was led by Charles River Ventures, a Silicon Valley-based fund. The same thing happened with Hasura,” Verma says. Nexus Venture seed-funded Hasura, “nearly co-led the series A”, and the series B was led by Lightspeed Venture Partners US. The category in which Hasura has found admirers is in automating data access for software applications. “We did a seed round in India about two and a half years ago, but almost immediately after that we moved to the US,” says Tanmai Gopal, co-founder and CEO of Hasura. The startup is now based in San Francisco, but has truly gone global with about 60 employees distributed across the US, Europe, India, Vietnam, Australia and Nigeria. Observe, another Nexus Venture portfolio company, started off in India with Nexus getting in at the series A stage. Then the startup moved to the US and went on to raise funding from Scale Ventures in 2019, and $54 million in series B investment led by Menlo Ventures this September. “So these companies now have this playbook of internationalising and globalising out of India,” Verma says. “As these cases are getting proven out in the country, there’s also a lot of confidence that the value investors or global investors are seeing—that there's a new crop of companies that are coming, which can compete, build out of India and go for the world.” Growth factors When Sridhar Vembu started Zoho some 25 years ago, or when one of his star employees, Girish Mathrubootham, stepped out to start Freshdesk (now Freshworks) in 2010, touching off an India-born SaaS revolution wouldn’t have been on their minds. But that is what is beginning to happen now. SaaS is increasingly how businesses—especially in the more advanced economies—access software to run their operations or help their customers. SaaS allows businesses, big and small, to avoid large upfront investments in software. Instead, businesses get to rent what they want off the internet, basically, and pay for what they use, by number of users, for instance. Indian companies offering software for a variety of uses on the SaaS model are on the cusp of a transformation, according to Bain and Co, a consultancy. And this transformation is backed by rising investor interest. Over the last five years, the number of funded SaaS companies has more than doubled, and the number of SaaS companies drawing series C or later stage capital has quadrupled, representing significant traction, says Bain in its report, India SaaS Report 2020, released in December. 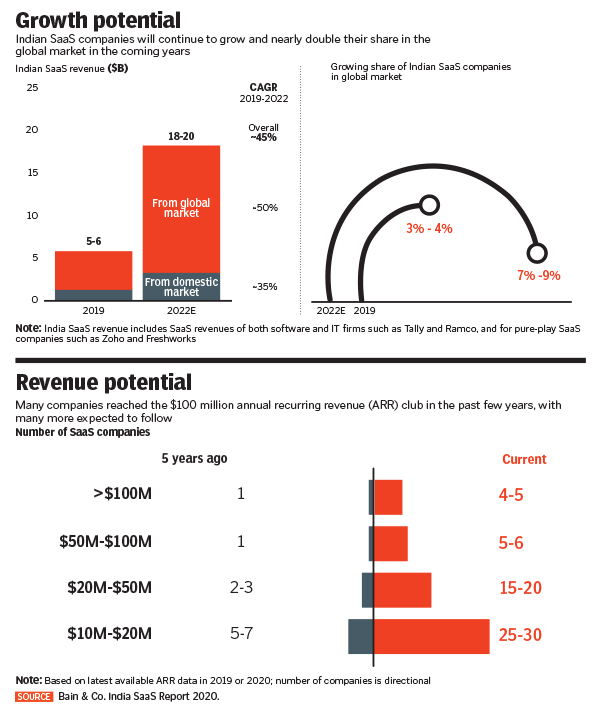 “In the last five years an enabling ecosystem has been built up,” says Lalit Reddy, co-author of the report, who is a partner and leader in Bain India’s private equity and digital delivery practices. One way this happened is, as Zoho and later Freshworks, grew, several of their employees stepped out to start their own ventures. Bain estimates that over 65 such ventures were started just by former Zoho and Freshworks employees who turned entrepreneurs. These early entrepreneurs took several initiatives to grow the SaaS ecosystem in India. For example, they started SaaSBOOMi, which became a very popular conference where entrepreneurs who had built successful SaaS companies would share their experiences. And “like the Paypal mafia in Silicon Valley, these founders in India founded or invested in other companies,” says Reddy. India now has a growing ecosystem of enablers comprising domestic and global SaaS investors; over a hundred SaaS angels with four or more investments; incubators and accelerators such as xto10x and Flipkart Leap; and SaaS development events and initiatives sponsored by communities such as SaasBOOMi, says the Bain report. There is also a critical mass of people who were product managers in the US, who have come back to India and have become involved in SaaS startups. “In the US and Western markets, there is now an acceptance of Indian SaaS companies that are selling world class products with high quality customer service,” Reddy said. Another factor is that, in general, interest in software development has grown substantially in India, says Gopal at Hasura, as companies across the spectrum—from new-age startups like Swiggy to traditional government-run banks—plugged into India’s mobile internet revolution to reach millions of customers. As digital penetration increases among Indian consumers, the digital products from businesses that serve them need to match ever-higher expectations of convenience, user experience and security. Which in turn is creating an environment for a whole host of software companies to grow. Such as Locus, which offers logistics intelligence to ecommerce businesses, or Yellow Messenger, which builds artificial intelligence (AI)-based bots that large businesses across sectors can use to offer new channels of customer support. Money matters There is now a pool of investors actively investing in Indian SaaS companies. Funding for Indian SaaS startups crossed $1.3 billion in 2019, Bain estimates. Horizontal business software was the largest sub-segment, accounting for two-thirds of all SaaS investments, and vertical-specific SaaS grew the fastest, albeit on a small base. Even amidst the Covid-19 pandemic, SaaS has been a prominent investment theme.

Tweets by @forbesindia
I trust science: Critical care nurse who is first to get vaccine in US
Electoral College officially confirms Joe Biden victory