By Nick Corasaniti and Jim Rutenberg 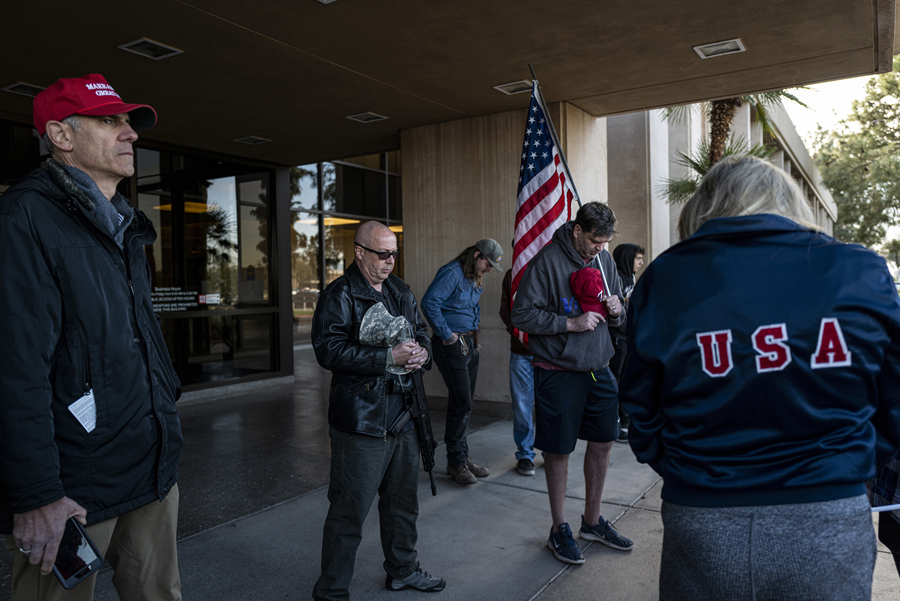 It began at 10 a.m. in New Hampshire, where electors met in a statehouse chamber festooned with holiday decorations and gave their four votes to Joe Biden. By noon on Monday, the battleground states of Arizona, Georgia and Pennsylvania, ground zero for many of President Donald Trump’s fruitless lawsuits, had backed Biden too. In New York, Bill and Hillary Clinton voted for Biden along with 27 other electors.

And when California cast its 55 votes for Biden around 5:30 p.m. Eastern time, it pushed him past the threshold of 270 Electoral College votes needed to win the presidency, putting the official seal on his victory after weeks of efforts by Trump to use legal challenges and political pressure to overturn the results.

With the Electoral College vote behind him, Biden called for unity while forcefully denouncing the president and his allies for their assault on the nation’s voting system. In an address in Wilmington, Delaware, on Monday night, he said the Republican efforts to get the Supreme Court to undo the result represented a “position so extreme we’ve never seen it before,” and called the attacks on election officials at the local level “unconscionable.”

Biden said that “it is time to turn the page” on the election. Praising officials who stood up for the integrity of the system, he added: “It was honest, it was free and it was fair. They saw it with their own eyes. And they wouldn’t be bullied into saying anything different.’’

For all of the turmoil that Trump had stirred with his conspiracy theories, lawsuits and baseless claims of fraud, the Electoral College vote that sealed Biden’s victory was mostly a staid, formal affair, devoid of drama. As it always is.

Though supporters of Trump had promised to mount protests outside the statehouses in battlegrounds that the president had lost, Monday’s voting went largely smoothly; there were no demonstrations that disrupted the proceedings, and in some states, police presence outnumbered protesters.

After Hawaii cast its four votes for Biden, he finished with 306 Electoral College votes, with no electors defecting from the slate.

The vote follows six weeks of unprecedented efforts by Trump to intervene in the electoral process and change the outcome of an election he lost by about 7 million votes. He was joined by many Republicans who supported his unfounded claims of voter fraud, including 126 party members in Congress and 18 state attorneys general who supported a case before the Supreme Court that legal experts said had no merit. The court rejected the case on Friday.

One of the few places where there was any drama was Michigan, where a state representative began the day by claiming that the state Republican Party would find a way to defy the Democratic electors won by Biden, and issuing an ominous threat that he could not promise a safe day in Lansing. The Republican speaker of the house, Lee Chatfield, responded by stripping him of committee assignments, then issuing a statement forcefully rejecting pleas to appoint a separate, Trump-backed slate of electors.

“I fear we’d lose our country forever,” Chatfield said. “This truly would bring mutually assured destruction for every future election in regards to the Electoral College. And I can’t stand for that. I won’t.”

The vote Monday officially sends Biden to the White House on his third attempt at the presidency, and after a trying election marked by deep divisions and a devastating pandemic. Biden has aggressively been working to fill out his Cabinet to prepare for when he takes office in January, aiming to have a team ready to combat the coronavirus and begin the long recovery.

The vote also largely removes any cover for Republicans in Congress who for six weeks have largely refused to acknowledge Biden as the president-elect. In providing Trump the room to dispute his loss, staying largely silent as he peddled conspiracy theories about voting fraud, they had presented the Electoral College as the new marker for when a presidential victory should be recognized.

On Monday, some Republicans expressed what appeared to be a grudging acknowledgment that Biden had prevailed.

Sen. Lindsey Graham of South Carolina, who had enthusiastically backed Trump’s bid to reverse his loss, told CNN that he had spoken with Biden and conveyed that he would work with him when possible. “It’s a very, very narrow path for the president,” Graham said of Trump. “I don’t see how it gets there from here, given what the Supreme Court did.”

Sen. Roy Blunt of Missouri said that “Vice President Biden is the president-elect,” and Sen. John Cornyn of Texas said the country would see “the page turned on Jan. 20, and we’ll have a peaceful transition.”

Sen. Mitch McConnell of Kentucky, the Senate majority leader and the most powerful Republican in Congress, did not respond when asked by a reporter in the Capitol about Biden. And Cornyn and Graham defended Trump’s right to continue to challenge the outcome in the courts, underscoring just how tight a grip the president maintains on Republicans as his term winds down.

Yet for all of Trump’s threats and challenges, the voting was an affirmation of the enduring American institution of free and fair elections. In state after state, party leaders of national acclaim joined with local grassroots delegates to certify Biden, in the manner prescribed in the Constitution but with the pandemic-era additions of masks and social distancing.