Cars and dolls for all: Spain tackles toy gender bias

Since December 1, a code of ethics has been in place encouraging toy shops and manufacturers to "avoid gender bias" when marketing toys, in guidelines agreed with the consumer affairs ministry of Spain 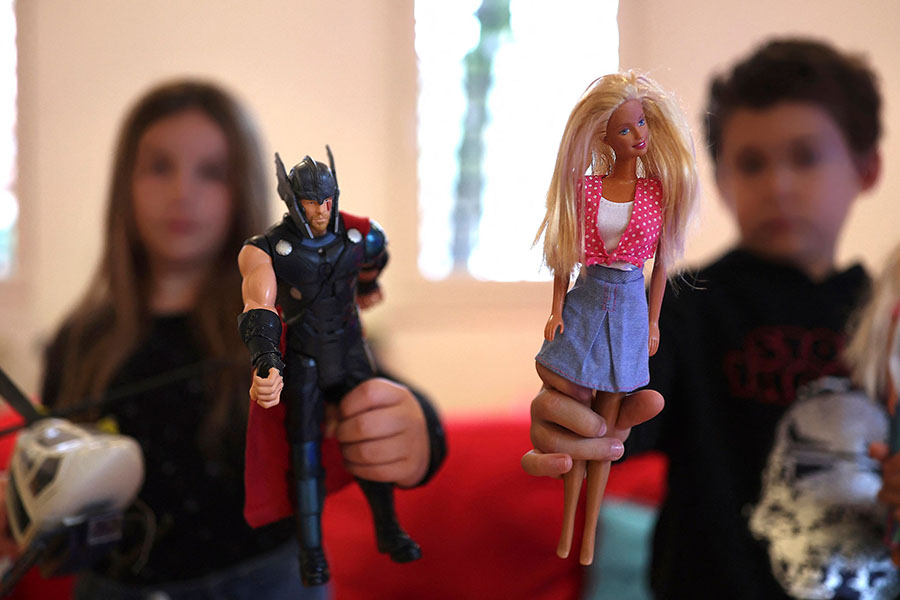 Since December 1, a code of ethics has been in place encouraging toy shops and manufacturers to "avoid gender bias" when marketing toys, in guidelines agreed with the consumer affairs ministry. Image: Thomas Coex/AFP

Cars for girls, dolls for boys and no more pink and blue: for Spain's left-wing government and the toy industry, it's game over for gender stereotypes when it comes to the country's littlest citizens.

Since December 1, a code of ethics has been in place encouraging toy shops and manufacturers to "avoid gender bias" when marketing toys, in guidelines agreed with the consumer affairs ministry.

Toy Planet, a Spanish chain based near the eastern resort of Valencia, has been following this strategy for the past decade in adverts for its own-brand toys.

Flicking through its catalogue, one image shows a girl with a toy gun wearing a police vest, another shows a girl hitting a punchbag, while another portrays a boy pushing a pram.

"Toys play a very important role in what sort of adults we become. So let's not be the ones to create prejudice from such an early age," said Toy Planet's director Ignacio Gaspar.

What drove the change back in 2012 was the realisation that Toy Planet was coming under fire on social media for its unimaginative publicity.

"We started using images that were the opposite: boys playing with dolls, girls using tool benches," Gaspar said.

But the switch wasn't easy.

"People said it would make boys more effeminate or turn girls into tomboys," he said.

Out with the pink and blue

A pioneer in feminist initiatives, the government of Prime Minister Pedro Sanchez has pushed through several schemes to tackle gender-based violence as well as advancing equality and women's rights.

Under the new code of ethics, advertisements can no longer say a toy is for a particular gender, or designate pink for girls and blue for boys, which is deemed to reinforce outdated gender roles. Also read: From hearing aids to vitiligo, Mattel bets on inclusiveness with Barbie and Ken dolls

Signed by the Spanish Association of Toy Manufacturers (AEFJ), which represents 90 percent of the industry in Spain, it took a year to draw up, said Rafael Escudero of the consumer affairs ministry.

But its scope remains limited since it does not affect packaging, street advertising or toy shop catalogues, Escudero added.

There are no sanctions for those who fail to comply, who only run a "reputational risk", and major international brands are not affected.

"It's obviously not enough but it's necessary if we want to move forwards," said Escudero.

On Gran Via, Madrid's main shopping street where people are out Christmas shopping, Julio Cesar Araujo, 62, has a clear idea of what to buy his grandchildren.

"Toys themselves aren't sexist, but it's the way they are perceived by the adults that design and make them, who sell and market them," Rodriguez explains.

"A catalogue with a picture of a boy wearing a baby sling is what we're aiming for."Also read: Spain moves to end gender stereotypes in toy adverts

Rodriguez says that with some customers, she will "gently try to break down silly ideas."

"When a grandfather says he doesn't want a cooker because he's buying for a boy, you tell him it makes no sense in a country with the highest number of internationally-recognised chefs," she says.

Tania San Jose, a 41-year-old mother and teacher from the northern town of Pamplona, thinks it's about time the government stepped in with some rules.

"Unfortunately there are still toys for boys and toys for girls but in our generation, we're trying to change that," she says.

"I could buy a doll for my son so he could have the chance to play like the girls do," she said.

"That way both sexes have the same opportunities to play."

Tweets by @forbesindia
How art indices are changing the narrative of the Indian art market
22 for 2022: Ukraine war and the India impact