Inside a Lego factory, where Christmas wishes come true

Lego is the biggest toymaker in the world, ahead of Japan's Bandai Namca and US groups Hasbro and Mattel. Here's a look inside its one of the oldest factories 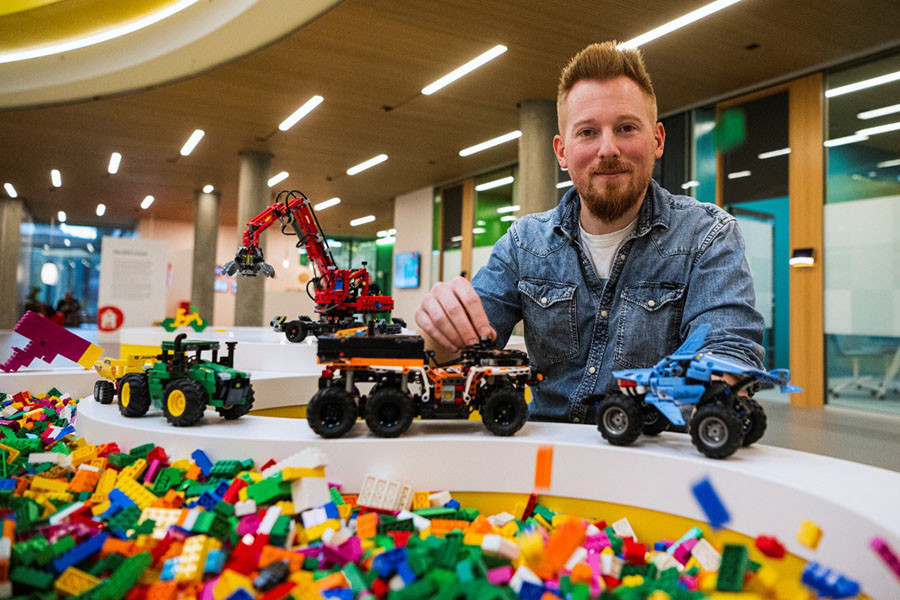 As a boy, Samuel Tacchi was crazy about Lego cranes. Now he designs them, under cloak-and-dagger secrecy, at the Danish group's headquarters where Santa has filled his sacks for decades.

At its ultra-modern flagship building in Billund, a visit to the offices where the design work is done is out of the question—the company is fiercely protective of its trade secrets.

But Tacchi, a 34-year-old Frenchman, lifts the veil a smidgen on the creative process, standing at a display featuring some of the brand's colourful toy kits.

"I always start with a little sketch on paper about what I have in mind", says Tacchi, who designs for the Lego Technic series.

"Then I start to build the technical layout: the drive train, steering, and starting to build with the function. And then I dive into the styling."

"Then afterwards we dive into the computer."

His office is a child's dream come true, chock-a-block with Lego Technic pieces.

"We have an elements shelf behind our backs. It's easy to reach and fix some elements, build them together and see if (our idea) works," he says.

In his seven years with the company, Tacchi has helped create around 25 kits.

From start-up to multinational

A family-owned company, Lego employs more than 20,000 people around the world—more than a quarter of them in Billund, which is also home to its oldest factory.

Here, in a huge hall where robots move about like in a choreographed dance, hundreds of thousands of pieces are manufactured each day.

Colourful plastic is moulded into familiar shapes: bricks, figurines, hair, dragon wings and tyres (Lego is reported to be the biggest tyre manufacturer in the world!)

Sorted and stored by model in large crates in an adjoining warehouse, the pieces are then sent to other factories to be included in kits.

While everything is made of plastic today, the toy empire was founded by a carpenter very conscious of the quality of the wood he used.

In 1932, in the middle of the Great Depression, Ole Kirk Kristiansen began making wooden toys, winning the favour of Danish children with his yo-yos.

"He sold the yo-yo to every child in Billund and... (when every child had one) he couldn't sell anymore. But he still had them laying around," explains Signe Wiese, Lego's resident historian.

"So instead of throwing them out or just leaving them, he reused them. He split the yo-yos in half and he used them for wheels on wagons."

Four years later, having given up on carpentry, he named his new company "Lego", a contraction of the Danish "Leg godt", which means "Play well".

With a shortage of raw materials after World War II, Kirk Kristiansen gradually turned towards plastic and invested his life savings in an injection moulding machine.

"He was really fascinated with the technology and the machinery and the material itself," says Wiese.

"So for him, it seems to have been a pretty easy decision, in spite of the fact that everyone was actually advising him against it."

The idea for the bricks came later.

Initially they were made without Lego's famed "clutch power"—the mechanism that makes it possible to click the bricks together.

The design was patented in 1958, paving the way for an endless catalogue of figures, shapes and kits.

Now, Lego is the biggest toymaker in the world, ahead of Japan's Bandai Namca and US groups Hasbro and Mattel, according to market analysts Statista.

This year, Lego says its catalogue of toys is bigger than ever before, but refuses to disclose the exact number. Another trade secret...