Toys 'R' us tries to come back, four years after bankruptcy

Four years after filing for Chapter 11 bankruptcy protection and three years since closing its 735 stores, the brand that Charles Lazarus started in 1957 has been raised from the dead in time for last-minute holiday shopping 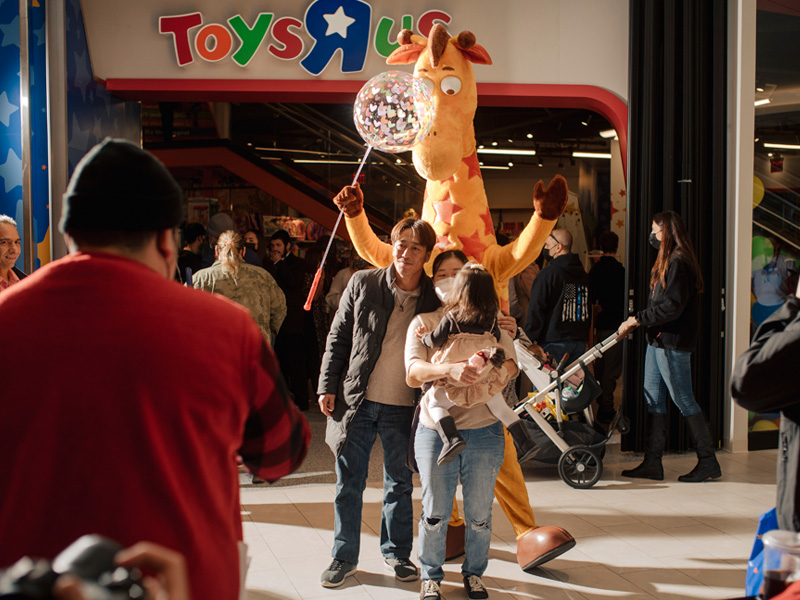 Geoffrey the Giraffe at the opening of the Toys R Us at the American Dream mall in East Rutherford, N.J., Dec. 21, 2021. Toys R Us, which had closed all its 735 U.S. stores, has resurfaced at the New Jersey mall, hoping to appeal to kids and nostalgic adult shoppers. (Clark Hodgin/The New York Times)

EAST RUTHERFORD, N.J. — It was 11 a.m. six days before Christmas, and a security guard in a bulletproof vest eyed 120 masked customers standing in line at the entrance to the newest retailer at the American Dream mall: Toys “R” Us.

When workers slid open two side gates, shoppers surged in. Lauryn Dankin, 10, walking with her mother, Caren, grabbed a blue cart and was greeted by a sign:

“NOTICE: Staircase is not accessible yet.”

Neither the cafe nor the slide that starts on the second floor and falls to the first was ready for customers. Lauryn walked past a magician practicing sleight of hand and approached Carl Zealer, who was working through a trick involving a worm on a string.

“I have a question,” she said. “Is that static, or is it all an illusion?”

Toys “R” Us can confound, too. Four years after filing for Chapter 11 bankruptcy protection and three years since closing its 735 stores, the brand that Charles Lazarus started in 1957 has been raised from the dead in time for last-minute holiday shopping. Its first new store and the mall, in East Rutherford, New Jersey, are betting on the strength of nostalgia’s grip, hoping that a familiar retail name will attract shoppers who are increasingly accustomed to doing their buying online. Toys “R” Us is planning to follow the opening of the American Dream store with hundreds of mini locations inside Macy’s stores over the next year.

“We sat down and were like: ‘We need a toy store! We believe in a toy store!’” said Paul Ghermezian, a developer whose company, Triple Five, owns American Dream. “We want a brand that drives you to come for more than something small.”

While the lyrics to the store’s memorable theme song (“I’m a Toys “R” Us kid!”) were painted on the steps, the music heard by American Dream shoppers had been remixed by new owners. On shelves, 10,000 toys ranged from silly (putty) to sophisticated (The New Yorker cover jigsaw puzzles). One board game — Mall Madness — was particularly meta. The name seemed to evoke both retail's struggles during the pandemic and the nightmare that American Dream faced three months ago when its 16-story indoor ski slope, Big Snow, caught fire overnight.

“This has got to be heaven,” said Tynisha Day, 44, who woke up at 7 a.m., drove three hours from Baltimore with her two sisters and wore rollers in her hair as she shopped. “We already finished our holiday shopping. We’re just here for the excitement!”

The store’s signature primary colors and images of its mascot, Geoffrey the Giraffe, are displayed as often as possible. The 20,000-square-foot store is close to Nickelodeon Universe — an indoor theme park complete with green slime and roller coasters — and the ice rink with a water park and a “not so mini golf” course.

Yehuda Shmidman is CEO of WHP Global, the brand acquisition and management firm that acquired a controlling stake in the parent company of Toys “R” Us in March. WHP, whose investors include Oaktree Capital Management, is one of several companies that buy struggling marquee brands and then look to capitalize on the familiarity of the brands’ names by licensing them. Its other brands include Anne Klein and Joseph Abboud.

Shmidman, 40, grew up in Bergen County, which includes East Rutherford. His first trip to Toys “R” Us was in nearby Paramus, a mall town with two Macy’s stores 4 miles apart. He marveled at shelves stocked from floor to ceiling.

“I didn’t know there were this many toys in the world,” he said. “It was such a mind-blowing experience — pre-internet days.”

The collapse of Toys “R” Us in 2018 was painful not only to its loyal customers but also to its more than 30,000 employees, who lost their jobs. The retailer became a case study in a private equity deal gone wrong, as the company’s investors loaded it up with billions in debt and drove it into bankruptcy. While lawyers and advisers collected millions in fees during the bankruptcy process, its former workers struggled to get severance.

Reminders of the brand’s tumble into bankruptcy still exist nearby. Less than 1 mile from American Dream, a Toys “R” Us sign remains on the display board visible to drivers on Route 3 at the Harmon Meadow shopping complex. Lauryn Dankin’s family called the closure of the local Toys “R” Us in Watchung, New Jersey, “one of the darkest days in our family.” Paramus also had one of the most recent locations; a smaller, “re-imagined” store opened there in November 2019 only to close in January 2021.

Whether good memories of shopping experiences past is enough to keep this version of Toys “R” Us going remains to be seen.

“We didn’t create the brand, and we’re not changing it,” Shmidman said. “All we’re doing is bringing it back to Americans who have been yearning for it.”

Next year, Shmidman said, he plans to start rolling out 400 Toys “R” Us stores inside Macy’s locations. The two stores reached an agreement in August, and Nata Dvir, the chief merchandising officer for Macy’s, said the partnership would allow Macy’s to “significantly expand our footprint” with children.

When shoppers visited Santaland at the Macy’s flagship store in Manhattan’s Herald Square this season, they saw signage featuring Geoffrey and an announcement: “Guess what’s coming to Macy’s!” Next to it was a direction to shop for toys on the Macy’s website, which features the Toys “R” Us catalog. A Macy’s spokesperson declined to reveal the amount of physical space that Toys “R” Us would be allotted, but said the “shop in shops” would feature merchandise and play space for children separated by age, interest and category.

Tweets by @forbesindia
Photo Of The Day: Joy of dancing
Which social networks have the highest usage among Gen Z and millennials?