Wang Ning is readying his fast-growing, Beijing-based company Pop Mart for an IPO—and an expansion beyond China 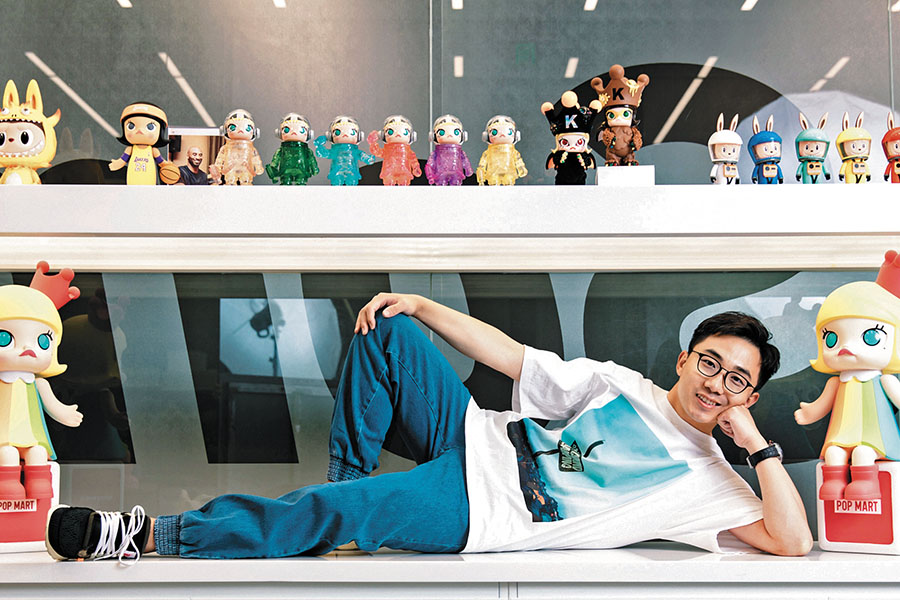 Wang Ning wouldn’t be where he is today without blond doll Molly; it is by far his biggest seller, with more than one fourth of annual sales
Image: Courtesy Pop Mart


What’s in the box? No one’s quite sure. And that’s the mystery, fun and immense commercial promise of Pop Mart, a fast-growing Beijing-based toy company. It sells its products—typically small figurines that cost about $8—in so-called “blind boxes” that don’t reveal the exact toy inside. “This is the trend of the younger generation,” says Wang Ning, Pop Mart’s 33-year-old founder, seated in his Beijing office amid rows of his creations.

Pop Mart sold enough Labubus (rabbit-like creatures with pastel-coloured fur and a set of monster’s teeth), Dimoos (aliens with puffs of cotton candy-shaped hair) and other toys to bring in roughly $240 million in revenue last year, doubling from 2018. The 10-year-old company is profitable with net income at $63 million. It’s now considering going public with a Hong Kong listing after a $100 million funding round in April placed a $2.5 billion valuation on the firm.

“The company’s vision is (to become) a global leader in entertainment and pop culture,” says Lisa Yuan, an investor at Beijing investment bank China Renaissance, which backed Pop Mart’s fundraising in May. Those possibilities, she says, include adapting intellectual property into movie and other story formats, a common part of the toy industry lifecycle. Forbes figures Wang’s 56 percent in the business is worth $1.2 billion, and Wang sees the company only growing from here. “We are considering a lot of things,” he says.

He’s been pondering how to build Pop Mart since graduating in 2009 from Zhengzhou University, where he studied advertising. (As for the rest of his background, Wang likes to keep that a mystery, too, and steadfastly refuses to discuss it.) He worked for a year at China-based Sina Corp, a digital media company that runs the country’s Twitter clone, Weibo, but found himself wanting to create his own thing. On a trip to Hong Kong, he noticed a popular retail chain called LOG-ON that sold a mishmash of toys, cosmetics and stationery. He figured a similar format might work on the mainland. 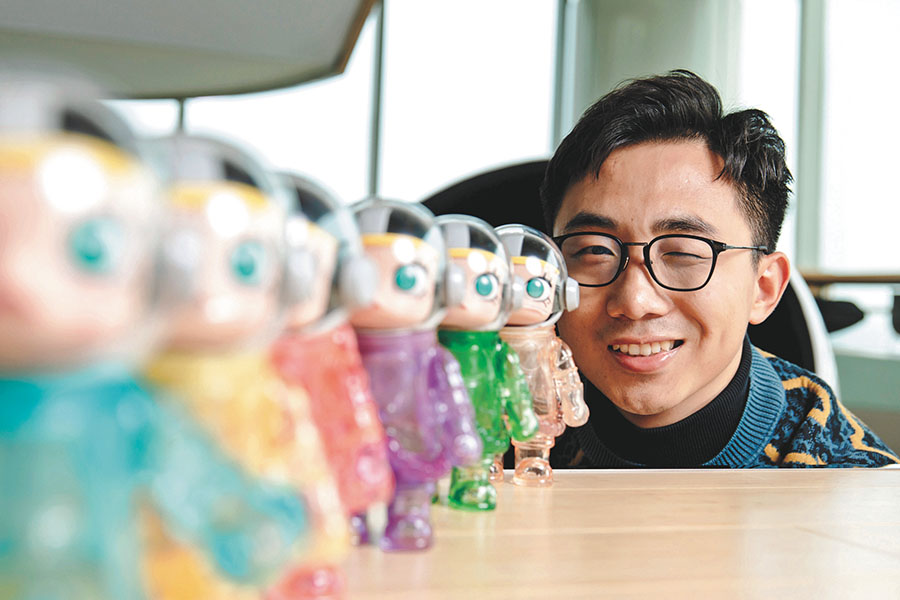 Ning has been known to obsess over everything from the correct height of a display table in a Pop Mart store to the wattage of the lights. “The store itself is an accumulation of a decade of experience,” he says
Image: Courtesy Pop Mart


In 2010, he rounded up some college friends—convincing them to pool their savings together—and opened the first Pop Mart store in a shopping mall near Beijing’s Zhongguancun neighbourhood, a hub for tech companies. At first, it too sold many different types of products, similar to LOG-ON, sourced from other brands just as Wang had seen LOG-ON do. But he scrambled to manage inventory, staff and customer service, finding it hard to even break even. One type of product at Pop Mart proved to be a runaway success. “At that time, toys were our best-selling category,” he says. “We gradually discontinued other products, and in 2014, we focussed exclusively on toys.”

To move forward, Wang drew inspiration from another source: Gashapon vending machines in Japan. These gashapons dispense toys at random in little, clear canisters—quite like the red-coloured ones that spit out gumballs and little toys in the US. Wang liked the element of surprise but wanted to sell his products in more upscale packaging. He began approaching artists to develop toy lines for him, noticing a Hong Kong-based Kenny Wong, who already started selling a doll called Molly. The little girl with turquoise, button-shaped eyes and a blond bob already had a small, passionate group of fans. Wang offered Wong the chance to make Molly a Pop Mart line. “I told Kenny, ‘You need a bigger stage’,” Wang says.

That stage began to quickly take form. With Wong and Molly onboard starting in 2016, Pop Mart’s sales began to pick up, reaching $22 million in 2017, then $73 million a year later. Pop Mart would swiftly ramp up to dozens of different toy lines (even the company’s spokesperson has lost count), but Molly was such a hit that Wang shaved off a slice of equity in Pop Mart—a 2 percent stake worth about $50 million—to keep Wong designing more of the toys. 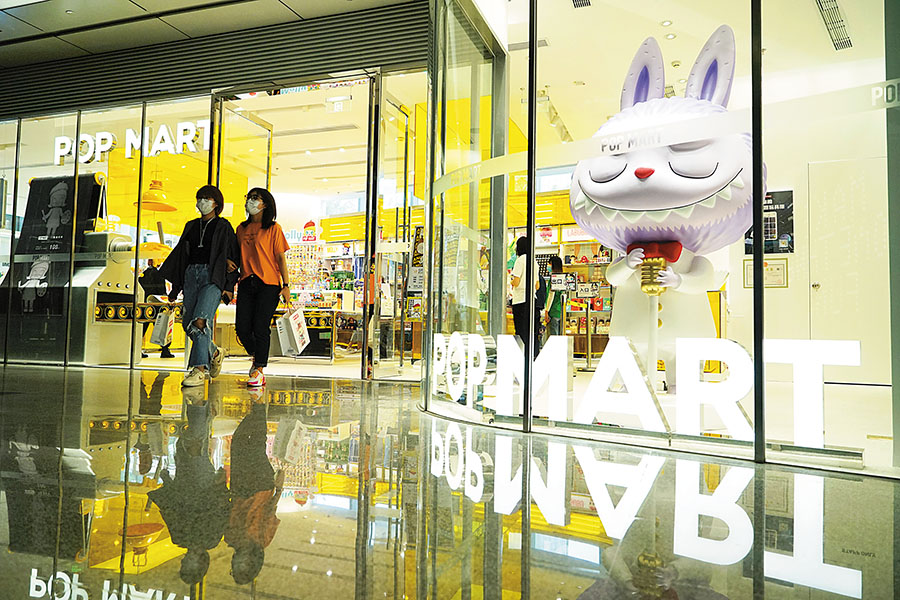 While many of the toys come in the blind boxes, customers know which of the series they’re buying, so they have a vague sense of what the figurine inside will look like. For instance, Molly dolls look nothing like the fanged rabbits from the Labubu line or the aliens from Dimoo. Each of these series has a different vibe thanks to the 25 artists who have contributed designs for Pop Mart; each artist gets a cut of the sales their work generates. But no series comes close to Wong’s Molly series, which accounted for 27 percent of 2019 sales.

Wang has started hosting toy shows—long staples in the West—in China to find new talent. With these creatives, Wang tries his best to maintain a hands-off style. “We will give some advice related to consumer trends,” he says. “But we respect the artists’ wishes.” That said, Wang is finely attuned to the other minute details of his company. When travelling abroad, he spends time studying the shopping districts and store formats within those foreign cities. He’s been known to obsess over everything from the correct height of a display table in a Pop Mart store to the wattage of the lights. “The store itself is an accumulation of a decade of experience,” he says. “We display so many different dolls in a small space, and we spend a lot of time on that alone.”

Pop Mart now has 114 stores, all of which were forced to close temporarily this year as China dealt with the coronavirus outbreak. They have since reopened, and Wang says sales at those stores have bounced back somewhat. Fortunately for him, Pop Mart’s ecommerce business has been exploding, too. In 2017, less than 10 percent of the company’s revenue came over the internet. Last year, almost a third of its sales were web-based, sold through online channels, including the company’s Paqu platform and Alibaba’s Tmall shopping site.

Pop Mart is not the only seller of blind boxes, but it has a lead. According to industry-research firm Frost and Sullivan, Pop Mart has 8.5 percent of the market; its next closest rival, which was not named, had 7.7 percent. For now, Pop Mart isn’t officially sold beyond China, but its products can be purchased through Alibaba’s global ecommerce platform Aliexpress, and some items have shown up on Amazon and eBay. Figuring out an international strategy is probably Wang’s top priority, and that won’t be easy. “You can’t blindly copy the format from China to create something that works for foreign customers,” cautions Jason Yu, a general manager at Kantar Worldpanel, a retail consultancy. “There is a chance of success if the company starts by moving (within) Asia, for example, [with] Southeast Asia first.”
The company does plan to expand in Asia, Europe and the United States of American, but citing IPO confidentiality rules, Wang declined to discuss more of his plans.

If devoutly loyal customers like Nicole Song, 38, are any indication, then Pop Mart may well find love in other parts of the world. Song works as an HR manager at a financial firm in Beijing and spends much of her leisure time researching and hunting down Pop Mart toys. If she can’t secure the one she wants at a store, she scours the web for it, often turning to Alibaba’s digital flea market, Xianyu. There, some Pop Mart toys have sold for hundreds of dollars.

“Blind boxes are so much different from what I have seen in the past,” says Song. “I like the toys’ design, and when I open the boxes, the experience is a bit of a gamble.” Much like Wang’s bet on others being up for the hunt.

Tweets by @forbesindia
'It's Not in My Head': They Survived Covid-19, but They Never Got Well
Obesity, Fat Boy, and the Lost Brotherhood