Could Prime Video's hit show 'The Boys' spawn an 'MCU' rival with its upcoming spinoff?

The third season of "The Boys" ended on July 8, 2022, on Prime Video—scoring success both on the platform and on social media. So much so that the show's creator, Eric Kripke, has already announced plans for a spinoff series 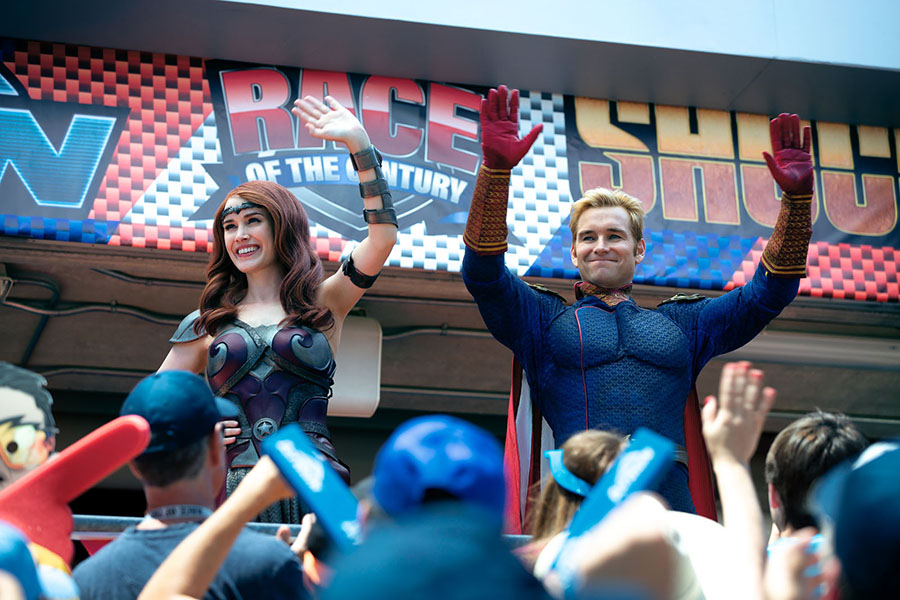 As yet, the creator of "The Boys" has not said whether actors from the original series will make cameos in the upcoming spinoff. Image: Jan Thijs/ Amazon Prime Video

Superhero fans are in for a treat. The creator of Prime Video's hit series "The Boys" is planning to develop the show's wider universe in a similar way to Marvel's Cinematic Universe (MCU). The next step in that direction will be a spinoff about a superhero university. So will "The Boys" become the new MCU of Prime Video?

The third season of "The Boys" ended on July 8, 2022 on Prime Video—scoring success both on the platform and on social media. So much so that the show's creator, Eric Kripke, has already announced plans for a spinoff series.

If the title has not yet been revealed, this new series in the works will follow students in a university for superheroes, run by Vought, the organization behind the making of superheroes. Only the name of the school, Good Oak, has so far been confirmed. And it's a concept that fans of "The Boys" were able to pick up in the show's third season, during a scene between one of the main superheroes, A-Train, played by Jessie Usher, and the Blue Hawk character, played by Nick Wechsler, when the latter recalled : "We both trained under Brink at school, and he taught us how to dominate totally."

"Because both of those guys graduated from Good Oak, which is the name of the school [in the spinoff], and Brink is a reference to the big superhero trainer at that school who is a character in the spinoff," Eric Kripke told Variety.

Various actors have already been announced on the cast, such as Jaz Sinclair and Patrick Schwarzenegger, who described the project as a kind of mash-up between the "Euphoria" show and superheroes—a description somewhat qualified by the creator of "The Boys." "It's about kids who are complicated psychologically getting into trouble. So in that way, it's like 'Euphoria.' I don't know if it's quite as dark, frankly, as 'Euphoria.' 'Euphoria' manages to be darker than 'The Boys' cinematic universe. They're not shooting up heroin in the hallways of their school, I would say, for example. But hopefully we're capturing something real about what it's like to be a kid in this oversaturated media landscape we all live in," said Eric Kripke quoted by Variety.

Launched in 2019, "The Boys" is a show that mixes dark humor and satire by presenting superheroes as the villains of history—not without a passing nod to Superman, Iron Man or Spider-Man, the superheroes of Marvel and DC Comics.

On that subject, Eric Kripke also paid tribute to Kevin Feige, the president of Marvel Studios: "That shared universe is fucking hard, man, because they're ultimately all episodes of the same giant series. So making them all not just entertaining in their own place, but telling this massive meta-story moving forward, I give Kevin Feige a lot of credit. I'm going to send him a fruit basket saying, 'Nice work!'".

In addition to this spinoff in the works, "The Boys" has already spawned an animated series called "The Boys Presents: Diabolical," launched in March 2022 on Prime Video. Some actors from the original series have lent their voices to the characters. It also features Don Cheadle, who plays James Rhodes in the Marvel Universe and Caleb McLaughlin, known for his role as Lucas Sinclair in "Stranger Things."

A fictional podcast based on the character of The Deep, played by Chace Crawford in "The Boys", was also launched in conjunction with the show's third season.

Tweets by @forbesindia
Crypto market stuck for now, but Bitcoin to make new all-time-highs within 24 months: Coinshares' CSO
If you don't keep yourself up to date, you will get obsolete quickly: Mastercard's Raja Rajamannar