The Gorgosaurus skeleton was discovered in the Judith River Formation near Havre, in the US state of Montana in 2018. Sotheby's believes it is one of the most valuable dinosaurs to ever appear on the market 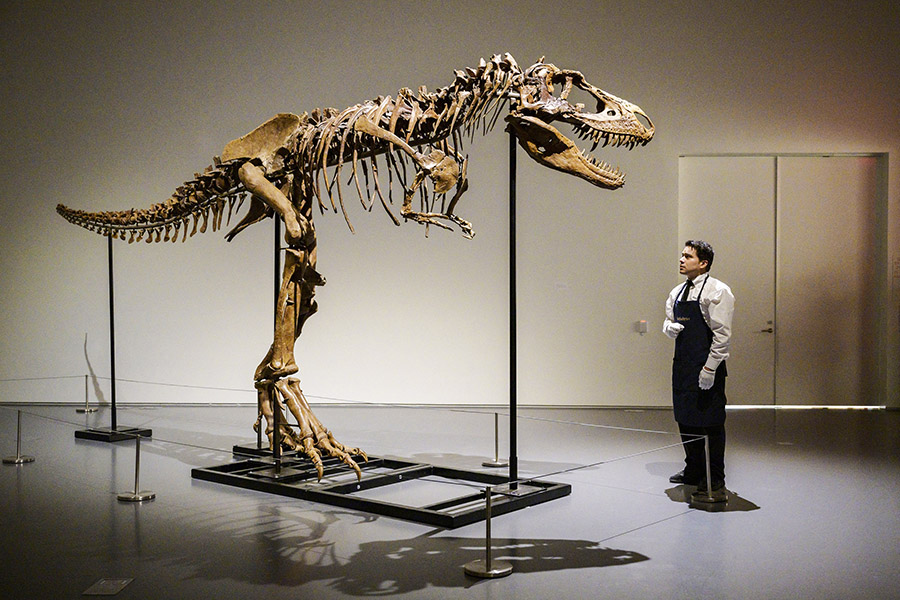 An art handler looks at a Gorgosaurus Skeleton measuring 10 feet tall (3.04 meters) as it is unveiled at Sotheby's in New York. Image: ANGELA WEISS / AFP

A skeleton of a Gorgosaurus dinosaur is going up for auction for the first time and is expected to fetch between $5 million and $8 million, Sotheby's said Tuesday.
The auction house will put the specimen, which is 10 feet tall (three meters) and 22 feet long, under the hammer in New York on July 28.
Sotheby's described the skeleton as "one of the most valuable dinosaurs to ever appear on the market."
The Gorgosaurus roamed the earth approximately 77 million years ago.
A typical adult weighed about two tonnes, slightly smaller than its more famous relative, the Tyrannosaurus rex.
Paleontologists say it was fiercer and faster than the T-Rex, with a stronger bite of around 42,000 newtons compared to 35,000.

The skeleton was discovered in the Judith River Formation near Havre, in the US state of Montana in 2018.
The sale will mark the first time that Sotheby's has auctioned a full dinosaur skeleton since it sold Sue the T-Rex in 1997 for $8.36 million.
"All of the other specimens of Gorgosaurus that have been found are in museums," Cassandra Hatton, Sotheby's head of Science and popular culture, told AFP.
"This is the only one that you can actually buy so it's an exciting moment, both for private collectors and institutions," she added.
Unlike other countries, the United States does not restrict the sale or export of fossils, meaning the skeleton could end up overseas.

Tweets by @forbesindia
Optiemus is rebooting to lead the pack of electronics manufacturers. Will it work?
Could Spotify become the new go-to service for recipes?