Invisible artwork sells for over €1 million at auction 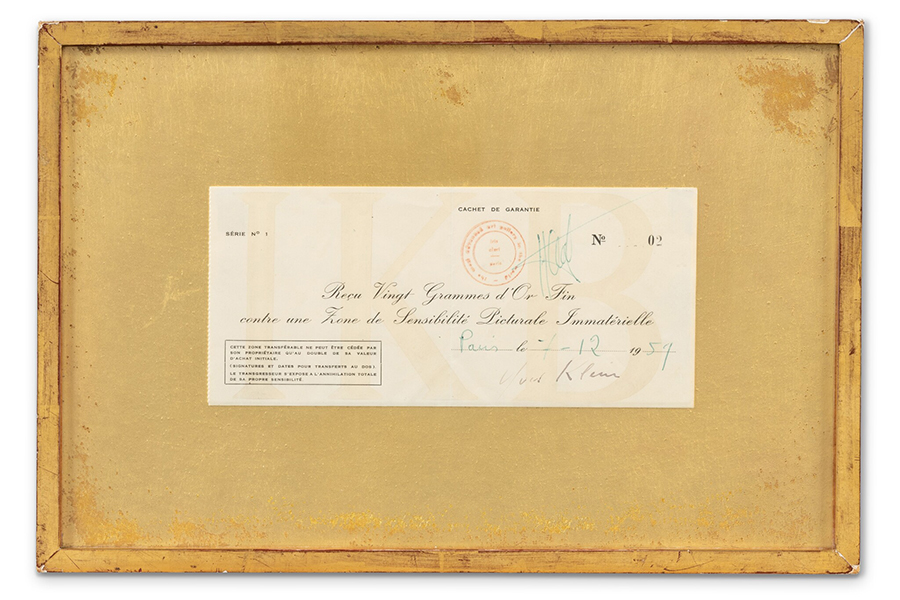 It is sometimes said that absolutely anything can be bought and sold. Sotheby's appears to have proved this by auctioning Yves Klein's "Zone de sensibilité picturale immatérielle Série n°1, Zone n°02." This receipt, confirming the transfer of ownership of an invisible work by the post-war French artist, was sold for twice its high estimate.

Yves Klein was continually questioning what constituted an object of art. What makes something art? Its immaterial potential? Starting in the early 1950s, he set out in quest of immaterial art. "Zone de sensibilité picturale immatérielle Série n°1, Zone n°02" (Zone of Immaterial Pictorial Sensitivity) testifies to the experiments of the French artist investigating the subjects of the void and the immaterial. This certificate of authenticity was produced a few months after the opening of the exhibition "The Void" at the gallery Iris Clert in Paris, April 28, 1958. On this occasion, the space had been emptied of all its contents. But, for Yves Klein, the gallery was far from empty, since it was saturated with "pictorial sensibility in its pure state."

The artist took such ideas to their extreme with his "zones of immaterial pictorial sensitivity." Yves Klein sold a series of these invisible, intangible zones of empty space that exist only in conceptual terms between 1959 and 1962, in exchange for a weight in pure gold. Buyers received a receipt, designed to look like a cashier's check. They then had two options: keep the receipt and make the corresponding immaterial area transferable through resale, or burn it as part of a ritual.

During this ceremony, the gold receipt given for the work was to be burned in front of witnesses chosen by the artist, while the artist threw the corresponding gold into the river Seine in Paris. According to Sotheby's, there were three transfer ceremonies, all well documented. While some buyers played along, others bent the rules and chose to keep their receipt. This was the case of the antique dealer Jacques Kugel, who acquired his receipt from Yves Klein on December 7, 1959.

The artwork went under the hammer at Sotheby's, April 6, during the "Collection Loïc Malle: Only Time Will Tell" sale in Paris. Patrick Drahi's auction house estimated that this creation could fetch between €300,000 and €500,000, but it was finally sold for more than €1 million to an anonymous European collector. Still, this is a far cry from the £23.6 million (about €28.4 million) that the painting "The Pink of Blue" fetched in 2012 at Christie's in London—a record for an artwork by Yves Klein.

In the 1950s, the idea of selling an intangible work seemed wildly outrageous. But that's no longer the case today, in part thanks to NFTs, verified digital tokens attesting to the authenticity of a work. "Some have likened the transfer of a zone of sensitivity and the invention of receipts as an ancestor of the NFT, which itself allows the exchange of immaterial works. If we add that Klein kept a register of the successive owners of the 'zones', it is easy to find here another revolutionary concept—the 'blockchain,'" notes Sotheby's in the catalog.