From Jeff Koons to Sacha Jafri, artists are now on a mission to conquer space

Recent years have seen an increasing number of projects combining art with the cosmos. Some artists and collectives send works created on Earth into space, others make them directly up there 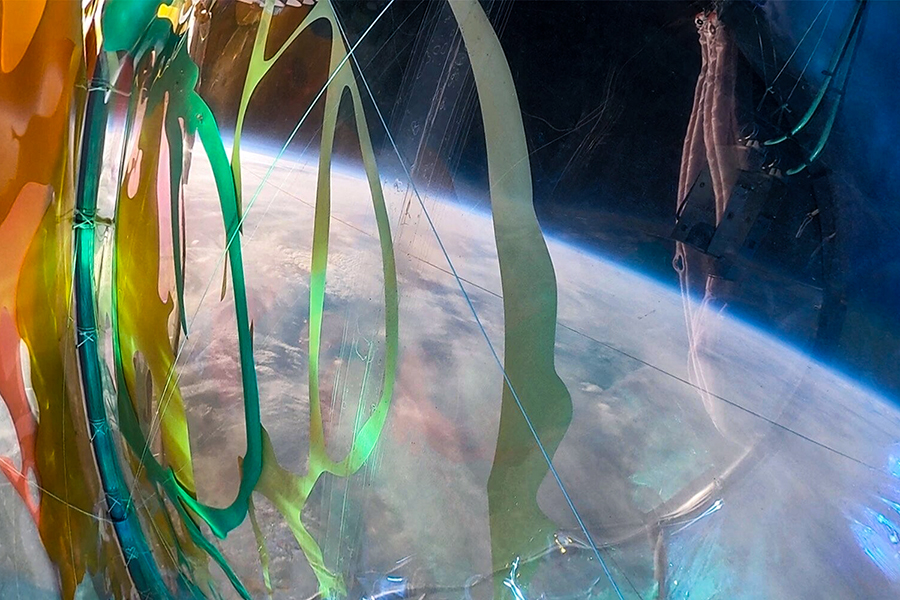 The Beyond Earth collective created "Living Light" to explore the links between our blue planet and the infinity of space. Image: Courtesy of Beyond Earth

Jeff Koons is moving beyond exhibiting his works in museums and art galleries. The American artist now wants to send his creations into space and, more precisely, to the Moon. And he isn't the only one embarking on the (artistic) conquest of the universe.

Jeff Koons has often done things on a monumental scale. Just take his enormous "Bouquet of Tulips," installed near the Petit Palais in Paris for the past four years. But he recently took a new step by announcing his intention to send a group of sculptures to the Moon. Pace Galleries, which represents the 67-year-old artist, says his creations will be sent to the celestial body in miniature CubeSat satellites measuring about 10 cm on all sides. The launch will take place by the end of the year from the Kennedy Space Center in Florida to coincide with the 50th anniversary of the Apollo 17 mission.

Jeff Koons believes that this stratospheric project, called Moon Phases, will "explore the imagination and technological innovation of the human race." In this vein, he has decided to associate an NFT with each of the sculptures being sent to the Moon. The British Sacha Jafri had a similar idea, revealing in February that he too wanted to install one of his creations on the Moon.

One small step for man, one giant leap for art

However, Jeff Koons and Sacha Jafri aren't the first artists to have set out on a mission to conquer space with their works. In 1969, Forrest Myers decided to send into space a ceramic plate engraved with six contemporary works by Robert Rauschenberg, David Novos, John Chamberlain, Claes Oldenburg, Andy Warhol and himself. The American artist tried to get NASA to approve his project many times, but without much success. He then joined forces with a scientific team to make and secretly attach the work of art to a leg of the lunar landing module of the Apollo 12 mission.

And recent years have seen an increasing number of projects combining art with the cosmos. "Living Light" is one of them. The art collective Beyond Earth designed this sculpture of more than four meters high to explore the links between our blue planet and the infinity of space. It was sent into space on June 18, 2021, aboard the Neptune One capsule of the American firm Space Perspective. It remained there for six hours before returning to our atmosphere and landing in the Atlantic Ocean.

The Beyond Earth collective has since recovered the sculpture and is restoring it for display in a museum. "We're now doing repairs on the piece to make sure it's available for public view," Beyond Earth co-founder Richelle Gribble told Penta. "We also want to share the story of how the work was created to amplify the biodiversity of aquatic ecosystems. The inner organs of the design represent the summation of more than 1,000 species of ocean life."

If some artists and collectives send works created on Earth into space, others make them directly up there. Such is the case of "The Wave," a watercolor that the American astronaut and artist Nicole Stott created in 2009 onboard the International Space Station.

But she isn't the first astronaut to flex her artistic skills hundreds of thousands of kilometers from Earth. Alexeï Leonov preceded her in 1965. That year, the late Soviet cosmonaut made history by becoming the first person to conduct a spacewalk—a feat that he immortalized by making a pencil sketch of a sunset. This drawing went on show in 2015 at the Science Museum in London, as part of the "Cosmonauts: Birth of the Space Age" exhibition.

Tweets by @forbesindia
Tokens, NFTs: The blockchain universe looks to capitalise on Will Smith's Oscars slap
Even with high gas prices, the open road still beckons