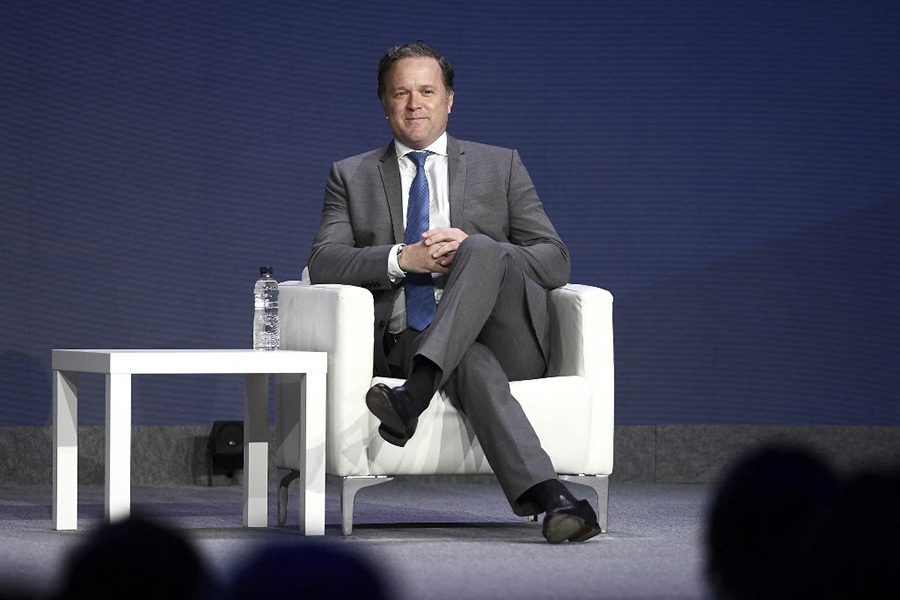 Sotheby’s Chief Executive Officer Charles Stewart attends a keynote on FinTech and Metaverse at the MWC (Mobile World Congress) in Barcelona on March 2, 2022. - The Mobile World Congress, where smartphone and telecoms companies show off their latest products and reveal their strategic visions, is expected to welcome more than 40,000 guests over its four-day run. (Photo by Josep LAGO / AFP)

Barcelona, Spain: Sotheby's auction house is almost three centuries old but its top brass want to embrace the cutting edge of technology and all of its buzzwords — metaverse, NFT and crypto among them.
"The reason Sotheby's has existed for 277 years is because we have a history of embracing innovation and so NFTs is no different," Charles Stewart, the firm's American chief executive, tells AFP in an interview.
He is talking about non-fungible tokens, the ubiquitous digital objects that are linked to pieces of art or other items, some of which the ancient auction house has sold for millions of dollars over the past year.
And even better for Stewart's business, he says there is plenty of cross-pollination between the old and new art worlds.

"The traditional art world is hearing a lot about NFTs. Many don't understand it. Some have embraced it. But there's absolutely a curiosity," he says on the sidelines of the Mobile World Congress in Barcelona.
"The same is true the other way around. (For) a lot of young technology investors — in particular founders, entrepreneurs — NFTs has been a gateway into the broader art market."
By way of example, crypto entrepreneur Justin Sun shelled out more than $70 million at Sotheby's for a work by Swiss-born 20th artist Alberto Giacometti last year.
Over at rival auction house Christie's, a collector paid a similar amount for an NFT by a US artist known as Beeple.

Opinions on the merits of NFT art vary wildly.
The most famous collections — Bored Ape Yacht Club and CryptoPunks — feature cartoon images replicated 10,000 times with algorithm-generated variations.
They are often pilloried for blocky graphics or tacky animation style.
Also, those who buy NFTs do not get a physical product, rather they receive a verified entry on a blockchain — essentially a piece of computer code.
The value comes from the supposed rarity or fame of the object, often driven by celebrity endorsements.
Stewart is unruffled by such criticisms — Sotheby's has sold both CryptoPunks and Bored Apes for millions of dollars — and he expects the market to continue to boom.
"This year we're seeing the overall NFT market could be $40 or $50 billion," he says.
For comparison, the traditional art market raised around $50 billion in total last year.
"It was only a year ago that NFTs burst onto our collective awareness and consciousness, and you've seen an explosion in interest since then," he says.
But Stewart says there is more to the NFT trade than hard cash.
"We're not looking at it so much as a specific dollar or euro amount as we are just the engagement of an audience," he says.
"Whether the prices rise or fall, if the interest is there, if the engagement is there, if new creators are connecting with audiences through NFTs and crypto, that's an important trend that we're going to invest behind."
© Agence France-Presse

Tweets by @forbesindia
Time to let sedans back into our lives. The Skoda Slavia is a great place to start
Build layers of support systems for your employees: RS Subramanian, DHL Express