In these exquisite kasir scattered around Istanbul, sultans could fantasize they were absolute masters of the Ottoman universe, shielded from upheaval and attempts to foment political discontent in their courts and territories. Today, these kasir exist as more than just historical monuments made of wood, stone and tile 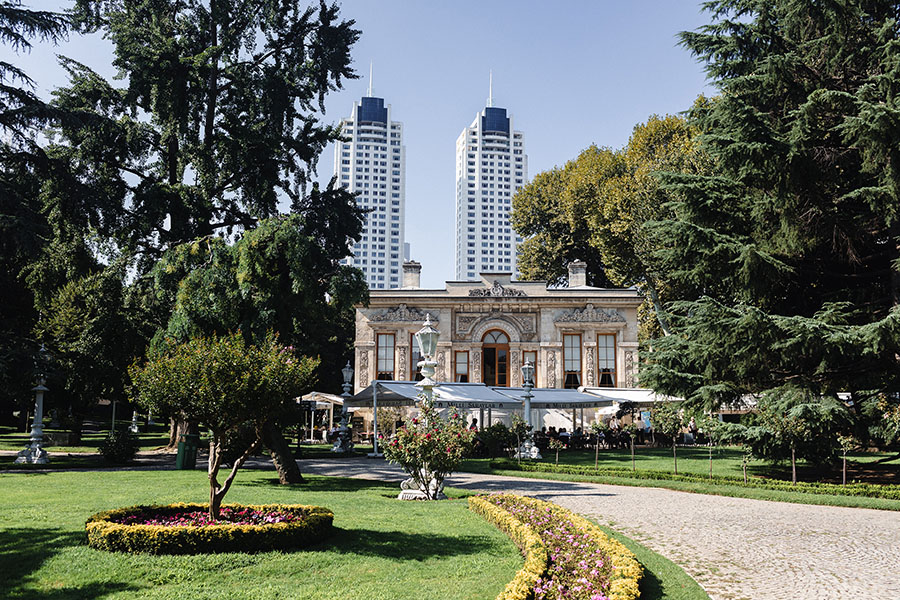 Inside one of the elegant pavilions known in Istanbul as a kasir, the clamor and chaos of big city life recedes. The noise of car horns and shouting vendors is replaced by near silence. Listen carefully for the imagined whisper of silk rustling in the breeze or the echo of a once vital conversation abruptly curtailed. In these discreet and sophisticated structures and summer palaces, built only for the sultans, time stands still. Ostensibly intended as private retreats away from the formality of the courts at Topkapi and Dolmabahçe palaces, in reality kasir were places to scheme and plot. Each is a snapshot of a particular moment in history and an intimate and enticing slice of Ottoman life.In these exquisite kasir scattered around Istanbul, sultans could fantasize they were absolute masters of the Ottoman universe, shielded from upheaval and attempts to foment political discontent in their courts and territories. Today, these kasir exist as more than just historical monuments made of wood, stone and tile. They reflect the majesty and splendor, mystery and intrigue of a once mighty empire that held the world in thrall for more than 600 years. Here are three. 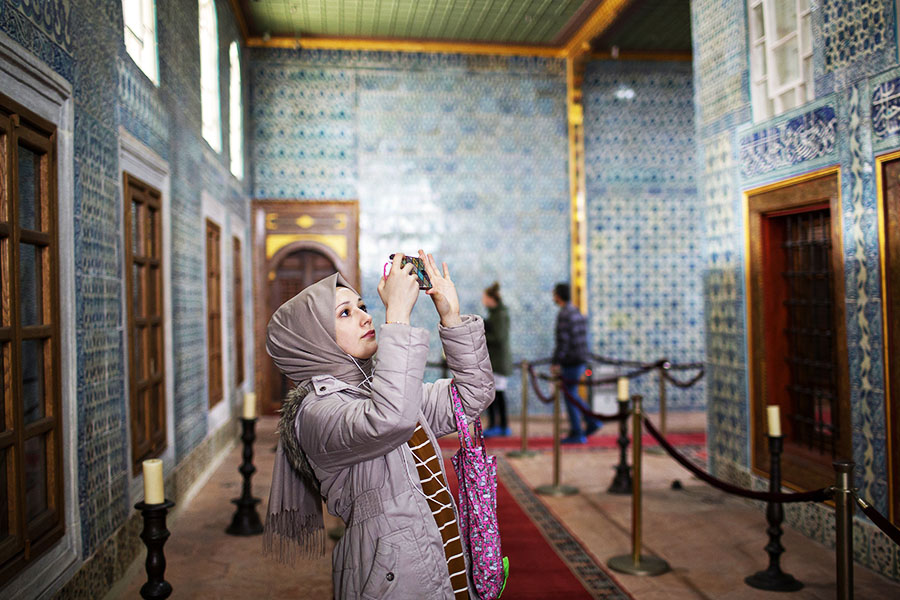 A woman takes pictures in Hünkar Kasri in Istanbul in November 2019. All the walls at Hünkar Kasri are covered in rare and exquisite Iznik tiles from the 17th century, some specially created for this building. Image: Danielle Villasana/The New York Times

It’s easy to walk straight past Hünkar Kasri in Eminönü on the Haliç (Golden Horn). Austere exterior walls and an unassuming entry give nothing away. The kasir is part of the Yeni Camii (New Mosque) complex Sultan Murat III ordered built at the request of his favorite concubine, Safiye Sultan, in the 16th century. Then as now Eminönü was a commercial center but it was a multicultural neighborhood largely inhabited by non-Muslims. Safiye Sultan wanted to Islamicize the area by building a mosque. The first stones were laid around 1597, but work stopped shortly afterward.

It started again in 1661 by order of Valide Turhan Sultan, the mother of Sultan Mehmet IV, who had been brought into the palace as a slave and eventually became the chief consort of one sultan, and mother of the next. As Valide Sultan, she oversaw the completion of the whole complex, which contained not only a mosque, but also a school, public fountains, a market and a tomb. It’s thought to be the first such complex ordered built by a woman. It opened in 1663 and was supposedly designed as a place to rest before or after prayers, or on special religious days.The first room on the right after the entranceway is believed to have been the chamber of the Valide Sultan. Note the masonry windowsills, both worn down on the left hand side. It’s said the women of the court would lean on them and gaze wistfully at the activity outside. Given that Turhan was the only Valide Sultan ever to have the legal right to help run the Ottoman Empire, it sounds like mere fancy. More likely she wore down the frames planning her son’s next political move.Also read: What is 'philantourism,' aka the desire to do good on vacation?Small as it is, the building has an Escher-like quality in the way shapes, such as rectangular door frames repeated along a short hallway, give the effect of a much larger space. All the walls and the eyvan, the domed space off the central hall, are covered in rare and exquisite Iznik tiles from the 17th century, specially created for this building. It’s worthwhile just standing quietly for some time in each of the rooms because there’s more color and movement in the tile work than can be absorbed in a casual glance.Hünkar Kasri is now used as an art gallery, open from 9 a.m. to 5 p.m. Tuesday to Sunday year-round. Entry is free. 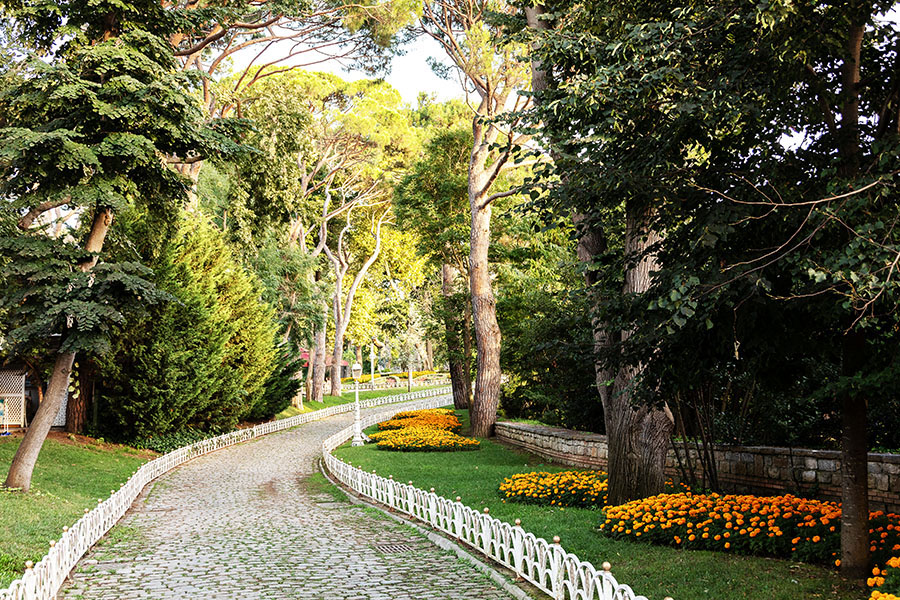 The grounds surrounding Ihlamur Kasri, near Beşiktaş in downtown Istanbul, Aug. 20, 2022. The buildings and the gardens of Ihlamur Kasri were laid out according to Islamic principles. Image: Bradley Secker/The New York Times

Nestled in a valley a short taxi ride inland from Beşiktaş wharf on the European shores of the Bosporus, İhlamur Kasri was built on land originally used as a haşbahçe, an imperial garden. It was part of a hunting ground established by Sultan Ahmed III in the 17th century and stretched as far as Yildiz Palace farther up the strait. Even now, moss-covered stones carved with the archery records of various sultans lie half-hidden in the grounds.One of these was Sultan Abdülmecid I. Between 1848 and 1855 he had Nigoğos Balyan, the architect who designed the Dolmabahçe Palace with his father, Garabet Amira Balyan, build the Meraşım Köşkü (Ceremonial Pavilion) and Harem Köşkü (also called the Maiyet Köşkü, or Retinue Pavilion) that together form İhlamur Kasrı. The buildings and the gardens were laid out according to Islamic principles, the most important being the placement of the pavilions in spots providing the best view of their surroundings. At the same time, these structures had to appear to blend in with the gardens, as if they were part of nature. To achieve this they were melded into the terrain utilizing terraces, embankments and watercourses that are still maintained today.Also read: From Montreal's Wellington street to Mumbai's Colaba Causeway, these are the coolest streets in the world
Although İhlamur Kasri was mainly intended as a place for the sultan and his family to relax, the small but grand Meraşım Köşkü was used to entertain influential diplomatic guests. Tours take place with a minimum of three people. There’s no explanatory text on the walls, but the decoration speaks for itself. The front doors open into a small vestibule flanked by two reception rooms. The décor is French in style, with hand-painted ceramic surrounds on the fireplaces, stucco walls embellished to look like marble, and gilt-covered pelmets hung with heavy brocade curtains. All the rooms are filled with original furniture, but unlike the mirror-image designs of the rooms in Dolmabahçe Palace, one room has a barrel ceiling ornamented with gilded moldings while the other has delicately painted floral designs dancing overhead.Before leaving, have a glass of tea at the Harem Köşkü, the other pavilion in the grounds. It’s home to a Beltur café, owned and operated by the Istanbul Municipality Council. Open 9 a.m. to 9:30 p.m., it serves a variety of hot beverages and snacks. Prices range between 10 and 35 Turkish lira (about 55 cents to about $2). In this calm oasis, despite being surrounded by high rise buildings, it’s easy to imagine the sultan’s children running through the trees in pursuit of game.İhlamur is open to visitors every day except Monday. Entry to the pavilion is 40 Turkish lira, which includes the garden; the garden only is 10 Turkish lira. 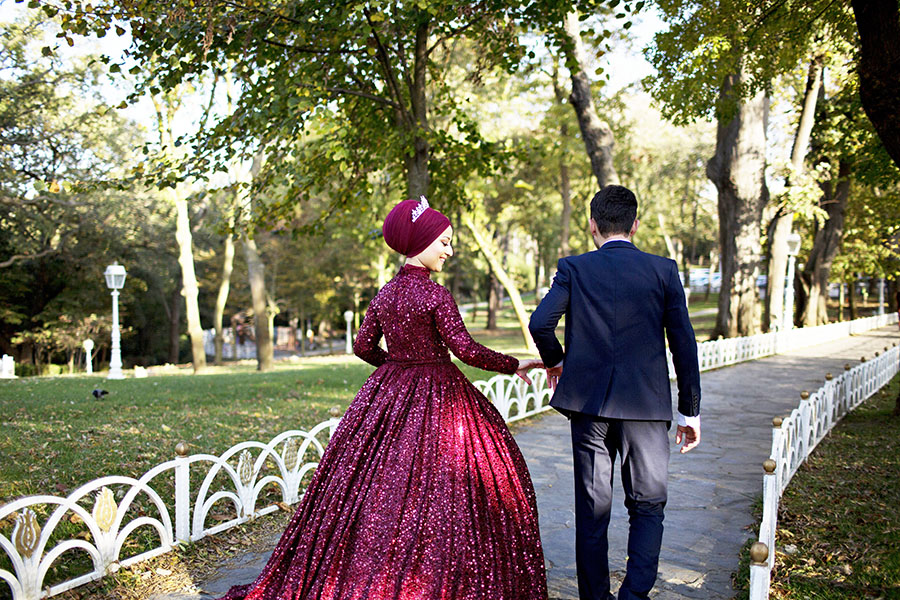 A couple explores the gardens at Hidiv Kasri as they take photos for their upcoming wedding, in Istanbul in November 2019. Image: Danielle Villasana/The New York Times

By the end of the 19th century, the might of the Ottoman Empire was on the wane, yet foreign dynasties still looked toward Turkey when they needed a powerful ally. Hidiv Kasri, in Beykoz on the Asian side of Istanbul, was built by the Egyptians with this in mind.When Abbas Hilmi II became the Egyptian khedive, or viceroy, in 1892, he decided to work with rather than against the Ottomans. He hoped to undermine the British, who had occupied Egypt and Sudan since 1882, by fostering a spirit of cooperation with the Turks. His plan was to wine and dine the Ottomans and seduce them to do Egypt’s bidding.He commissioned a famous architect to build Hidiv Kasri as an elegant summer residence in the Art Nouveau style, either one of the Italian architects Delfo Seminati or Raimondo D’Arcono, or possibly even the Slovenian court architect Antonio Lasciac; it’s not clear which one. To complicate things further, the Egyptian Princess Cavidan Hanim, originally the Hungarian Countess May Torok von Szendro, who was Abbas Hilmi II’s unofficial and secret second wife at the time, claims she drew up the layout of the rooms, the final interior design and the plantings of the palace gardens. The building was completed in 1907, and it’s still uncertain exactly whose creative mind was behind the finished work.Also read: Venice is looking to woo digital nomads
Whatever the truth, the building is a curious mix of on-trend European design and Arabic architectural characteristics reworked for Ottoman sensibilities. Marble fountains grace internal courtyards and a curved dining room features Art Deco inspired ceiling lights that transport diners into the plot of an Agatha Christie novel. Minimalist in design, the poolside terrace wouldn’t look out of place in a contemporary five star hotel. The building now serves as a restaurant and cafe.Hidiv Kasri, located at the top of a hill, is most easily reached by taxi from Kanlica wharf for around 30 Turkish lira. It’s open from 8 a.m. to 11 p.m. seven days a week and serves a menu the sultans would be proud of, sans alcohol. Enjoy a sumptuous Turkish breakfast or dine on hot and cold meat or vegetable meze such as artichokes cooked in olive oil, followed by kuzu lokum, tender slices of lamb cooked to perfection.