Experiences of the Indian Diaspora in Africa

Manubhai Madhvani
Manubhai Madhvani is the chairman of the Madhvani Group, one of the biggest business houses in East Africa. Madhvani faced the brunt of Ugandan dictator Idi Amin’s ire against Asians. Madhvani was jailed in 1972, later released and exiled from Uganda and his assets were taken over. But he returned under President Yoweri Museveni and rebuilt his fortune. Madhvani recounts those dreadful days and also delineates the positive changes in Uganda.

The Horror of 1972
I was born in this country and consider this my own country. In the 1970s, we were one of the largest groups in Uganda — we were almost 10 percent of the GNP of the nation. Our group has been committed to Uganda since the beginning. 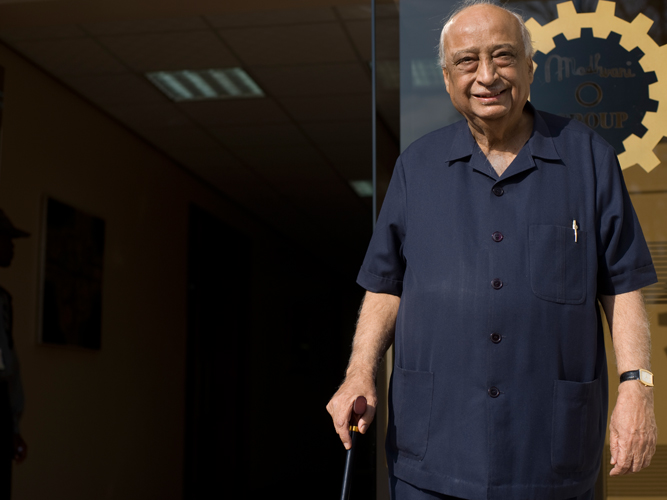 Image: Walter Astrada/ AFP for Forbes India
Manubhai Madhvani, Chairman,Madhvani Group
In 1972, Amin trained his guns on Ugandan Asians. I was the first to bear the brunt of his ire. I was imprisoned by Idi Amin in a dirty, dark and bloodstained prison called Mankindye which was nicknamed ‘Singapore Block’. It was not just a prison — it was also a torture chamber for political enemies. Prisoners rarely left Singapore Block alive. There were several gruesome incidents that happened in front of me that would drive chills down my spine. I didn’t know if I would leave alive.
I was in Singapore Block for three dreadful weeks. One day I was released and taken to Idi Amin. I held a Ugandan passport since 1964 (before that I had a British passport.) I asked Amin about my Ugandan citizenship. He gave a very vague answer and I realised that he wanted us to leave the country.
Escape to India
Most of the Asians left Uganda and made headway to other countries like the UK, Kenya and Canada. That time was very difficult for us. I left with just one suitcase and no clothes virtually.
I first went to India — met Mrs Indira Gandhi. I was told to remain incognito for a while because of the security of my family members in Uganda. We as a family had lost all our assets — at that time they were valued at around $100 million. All Asians were asked to leave Uganda within 90 days. I became a British citizen and went and settled down in London. Fortunately, we had some business interests in Kenya, Tanzania and India in areas like sugar and tea. Those businesses kept us going. But the group as a whole had 90 percent of its assets in Uganda and that was gone.
Back and Kicking
During the 1970s, nearly 200,000 people came from East Africa into the UK. Then in 1985, we were invited back to Uganda by President Yoweri Museveni. Our group had production of 70,000 tonnes of sugar in 1972. Today we are at 150,000 tonnes. In another two years, we’ll be at 200,000 tonnes.
All the Asians came back here as new entrepreneurs. There must be 15,000 Indians today in Uganda. The Madhvani Group is a $200-million group today. We are one of the largest groups here.
The New Uganda
The Ugandan government has a very open policy for people to come and do business here. Indians come here and open shops. That doesn’t require a lot of capital. But it’s better that some part of the trade can be looked after by Ugandans. Indians have always wanted to work for the betterment of the country. We want everyone to live peacefully here. The state of African countries really depends on the leadership.
The Role of Leadership
Our [Uganda’s] problem is population growth. We have to develop this country on the basis of agro-based industry. Employment will be improved and we can contribute to the world. What we can offer is land and water.
Museveni was a socialist when he came to power. Then he realised that he needed the economy to work. So, he put in intense efforts in economic development. Openness for everyone to come in, develop the country, he gave incentives to industry. He is developing the oil industry here. This will be a big thing for the country. Africa has a good future. It all depends on leadership of the countries. Museveni has been in power for 20-25 years. I hope whenever leadership changes here, it changes for the good.
In an Africa, any country depends on leadership of the right person. Change of leadership is the biggest risk. That can change the situation overnight. Look at Zimbabwe and what happened there, it’s an eye-opener. How can we be sure if new leadership comes in what will happen in Uganda? The country’s situation really depends on the sincerity of leadership. The Western democracy in Africa has never paid.
Africa had tribal societies. We need some sort of tribal-oriented governance. The democracy has to be tribal-oriented. I have come to the stage that if any government comes to power, they will need me. They won’t want to disrupt industry.
I came back here in 1985. From 1972-85, I fought for my rights. Once you become a refugee, very few countries invite you back. It took me some while to settle down again, but I still feel this is my home.

The Comcraft Group was established in Kenya in 1915. It was started by Manu Chandaria’s father who came from Saurashtra, Gujarat. The Comcraft Group now operates in 50 countries worldwide — 15 of which are in Africa. The Chandaria family itself is a 65-member joint family today even though most of their operations are professionalised. Manu Chandaria talks about the Chinese influx into Africa

The Chinese Strategy
China is moving very fast into Africa. I don’t know if you see internal pressure in India to go into Africa the way you see with Chinese companies. China seems to be really one country that is making all the big investments here.
The Chinese try and find what is required socially in the country. In places they said we’ll build a stadium as a gift to the country. They know how to woo the people. That kind of thing is just not happening with the Indians. One doesn’t know if Indians can compete with the Chinese. The growth of the India economy is fast, no doubt, but they aren’t as quick as the Chinese in grabbing opportunities.

The Chinese influence is very strong in Angola, Zambia, Nigeria and South Africa. They do not come into small businesses or in peripheral businesses. Only in large businesses.
Reactions to the Chinese Influx
Only a few African countries like South Africa have started looking seriously at the Chinese influx and are worried about it. South Africa has a lot of European investment. South African company SABMiller moved its headquarters to Europe. A lot of companies that are moving their headquarters away from there so they can play on the international scale, and not just the scale that South Africa offers. A number of them have moved and they felt that Chinese influence in Africa will reduce their capacity, their influence. They started discussing if China is dumping, reducing jobs for our workforce by bringing their own. The other countries just don’t bother about the Chinese influence.
The Indians Are Lagging
The Chinese influx doesn’t scare me. But the importance of Indians is becoming lesser by the day. The Indians are in smaller businesses and are seen all over the place. The Chinese are picking up the businesses of their choice. If they are short of copper, they will go for copper. Whatever they are short of in minerals, they will go for it. The support of government in China is very high. In 2006-07, China called many African presidents and heads of states together. Then they created an African fund for Chinese companies to take from and invest in Africa. I think India also followed that in some measure. But you look at the quantum of what they are doing and what we are doing – there is a lot of difference. When we talk about 60 companies in Africa, they have given a major entry into Africa. Right now the poorer countries have shown no concern about China.
Comparatively India can do much more – it has a huge diaspora here in Africa.
Essar has come in and bought 50 percent stake in a refinery here. They are participating in a mobile company. So people are coming in. But you can’t see a huge growth. I am on the advisory committee of Bank of India here. I saw the manager yesterday at Kampala airport – he had come to set up a branch there. These banks should be in all countries. That attitude until now was very limited.
Reforms Across Africa
Since 1992, reforms have been sweeping across Africa. Some countries like Kenya have moved faster than Ethiopia. Nigeria is slower than what one would expect it to be. Botswana has moved very fast. Some are slow. But everyone is on the path to reform. No one is sitting idle. But the reforms are many. And they need to be managed because corruption can kick in or governance issues can come in.
In Kenya, for instance, there is no exchange control except on capital amount which you can’t move, like in India, without permission. Kenya is an open economy – not like many other African countries. Here you can invest quite easily.
Uganda is bringing out more changes. That’s because they are landlocked so there are limitations many ways. In East Africa, Kenya would lead in reforms. Rwanda is very small but it’s moving very fast. The governments here aren’t yet rolling out the red carpet to investors.

Tweets by @forbesindia
How Often are Races Fixed?
The Vessel of Bounty