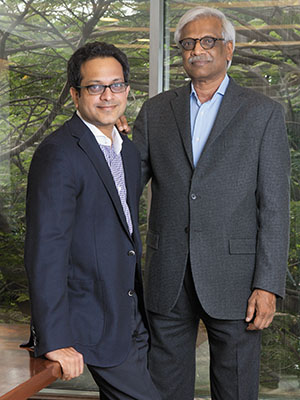 There is no monopoly on good taste. It is this epiphany—combined with the business acumen that has driven the Marwari community for generations—that has spawned a home-grown textile success story in the erstwhile pensioner’s paradise of Bangalore.

Himatsingka Seide, a Rs 2,500 crore (sales) home-textile powerhouse with manufacturing operations in India and a retail network across 22 countries, has been growing at a compound annual growth rate (CAGR) of 15-18 percent over the last five years—this in a tough global economic environment and in a sector that is growing at a CAGR of 7 to 8 percent, according to industry estimates. For fiscal 2013, the company’s consolidated revenue grew 18.3 percent to Rs 1,689.43 crore, while profit after tax was up 73.4 percent to Rs 57.32 crore.

Started by first-generation businessmen brothers Dinesh Kumar and Ajoy Kumar Himatsingka in 1985, the listed company is a significant player in the home-textile space, points out Amit Gugnani, senior vice president, fashion-textile and apparel, at management consulting firm Technopak. “The group has always been forward-looking in terms of expanding their product portfolio, acquiring plants and setting up facilities. The company’s focus on fabric, design, drapes and pattern differentiates their products,” he adds.

Says Devangshu Dutta, chief executive, Third Eyesight, a marketing and consultancy firm: “[The focus on design, technology and scale] has provided highly profitable growth for most of the company’s life... Other design-based exporters typically lack the scale and technology orientation in which Himatsingka has invested.” 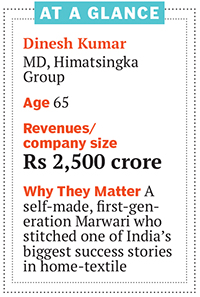 The beginning
It was during a business trip to Europe that Dinesh, then an exporter of textile products, had a chance to observe successful textile houses and recognised an opportunity to do one better. “They are not magicians. They applied great technology to quality raw materials—the right yarn, texture and colour—to create distinctive products,” says Dinesh, 65, the group managing director. Though he had no formal training in textiles, his passion for the product and his self-belief have been the driving forces behind the 28-year-old business. Ajoy is currently the vice chairman, but is not actively involved in the business.

The business got a boost when Dinesh’s son Shrikant joined in 2001. Today, much of the expansion and new initiatives are overseen by him.

The company invested Rs 1,200 crore between 2006 and 2008, as part of its expansion plan. In 2007, it invested $125 million (Rs 535 crore) to set up a new bed linen manufacturing facility at the Hassan SEZ, about 200 km from Bangalore. In the same year, it acquired Italian company Giuseppe Bellora known for its bed linen brands, New York-based home furnishing player Divatex Home Fashions, and DWI Holdings, a licensee of the Calvin Klein Home and Barbara Barry brands. Shrikant, who is the executive director, is reluctant to divulge financial details of the acquisitions, but, according to a release by DWI Holdings at the time of the acquisition in 2007, the deal was valued at $30 million, with the US-based home-textile company posting revenue of $47 million in FY07. For Himatsingka, which had sales of about $45 million then, this highlights the enormous  appetite for risk and calculated growth plans.

But Shrikant, 34, points out that it was his father’s early emphasis on research, product development and product design that forms the basis of the company’s success. “To set up a manufacturing facility to make luxury home-textile products was the first of its kind in India back then,” he says.


A professional approach
Himatsingka is a family-owned business with promoters’ holding at 57.07 percent as of December 2013. But with a global presence and workforce of over 5,000, the company boasts of professionally-driven values. For Shrikant, the family is just the majority shareholder. “We have created an environment of transparency, empowerment and high governance with an underlying conservative streak, which has helped us to attract and retain talent,” says Shrikant.

Group CFO and president, finance, KP Pradeep has spent over six years in the organisation. Having worked with Accenture and Fidelity earlier, Pradeep sees no difference between an MNC and family-owned businesses in the country. “Today, family-run business houses have grown beyond that. Enterprises have realised that shareholding is different from the functioning and operation of the business,” he says.

Shrikant says the journey has been fascinating. “Over the last five years, we have been growing at a CAGR of 15-18 percent. We hope to continue with this and expand our manufacturing and distribution network,” he adds. However, with export challenges remaining, the company needs to focus on more selective products, sales channels and innovative selling and merchandising, says Gugnani of Technopak.