While Alibaba has a secondary listing in Hong Kong, that does not allow it to join a popular Stock Connect programme that links to bourses in Shanghai and Shenzhen 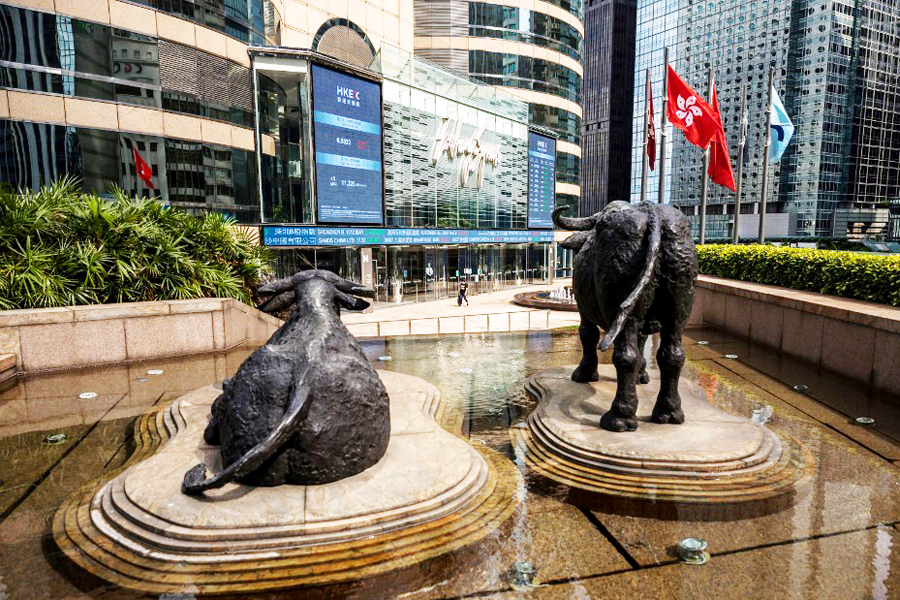 A view of the Exchange Square which houses the Hong Kong Stock Exchange in Hong Kong on April 27, 2022. Image: Dale De La Rey/AFP

Hong Kong, China: E-commerce giant Alibaba said Tuesday it will seek a primary listing in Hong Kong, potentially giving access to China's vast pool of investors, as mainland officials indicate a long-running crackdown on the tech sector could be coming to an end.
The move also comes as Chinese tech companies traded in New York grow increasingly worried about a regulatory drive by US authorities amid simmering tensions between the superpowers.

While Alibaba has a secondary listing in Hong Kong, that does not allow it to join a popular Stock Connect programme that links to bourses in Shanghai and Shenzhen.
The primary listing, which is expected to take place before the end of the year, would open that door.
News of the plan sent shares in Alibaba soaring more than five percent Tuesday, boosting other tech firms and helping drag the broader Hang Seng Index higher.
The Hangzhou-based group is one of a number of tech behemoths ensnared in a wide-ranging regulatory crackdown on alleged anti-competitive practices since late 2020.
The campaign has been driven by fears in Beijing that massive internet companies control too much data and have expanded too quickly.
Read more: China officials haul in Alibaba execs over massive data heist: report
But officials appear to be taking a lighter touch as they grapple with a slowing economy. And in May, Premier Li Keqiang urged support for tech companies to list both domestically and abroad.
But there is still a strict regulatory environment: President Xi Jinping last month called for stronger oversight and better security in the financial tech arena.
CEO and group chairman Daniel Zhang said on Tuesday the primary listing aimed to foster "a wider and more diversified investor base to share in Alibaba’s growth and future, especially from China and other markets in Asia".
"Hong Kong is also the launch pad for Alibaba’s globalisation strategy, and we are fully confident in China’s economy and future."
Alibaba said on Tuesday it had an average daily trading volume of $3.2 billion in the United States in the first six months of the year, while its Hong Kong secondary listing saw around $700 million.
Hong Kong's Stock Connect programme allows firms to take advantage of liquidity from mainland China for easier financing and higher valuations, but to qualify they must conduct a majority of their annual trading in the Chinese finance hub.
Alibaba is among a category of "innovative" Chinese firms with weighted voting rights or variable interest entities that would be eligible for dual-primary listing in Hong Kong, following a rule change by the bourse in January.
Analyst Willer Chen, at Forsyth Barr Asia, told Bloomberg that the move would be "massive" for Alibaba, adding that inclusion in Stock Connect could lead to a "more diversified investor base".
Beijing has opposed an attempt by US regulators to inspect the audit papers of Chinese firms listed there, and Alibaba is among 250 companies that face potential removal if no deal is reached.
Domestically, Alibaba is still reeling from the tech crackdown as well as China's slowing economy caused by the fallout from strict Covid curbs.
The company was hit with a record $2.75 billion fine for alleged unfair practices last year, and a planned 2020 IPO by Alibaba's financial arm Ant Group — which would have been the world's largest public offering at the time — was cancelled at the last minute.
Alibaba has lost around two-thirds of its value since a 2020 peak, according to Bloomberg, and in May the firm reported that profit fell 59 percent in the last fiscal year.