Asia: Looking the US recession in the eye?

The US Federal Reserve is widely expected to hike rates by 75 to 100 basis points next week after the most telling indicator of a US recession—the inverted yield curve—is now blinking red. But economies like India and China, driven by domestic demand, might be able to weather the storm 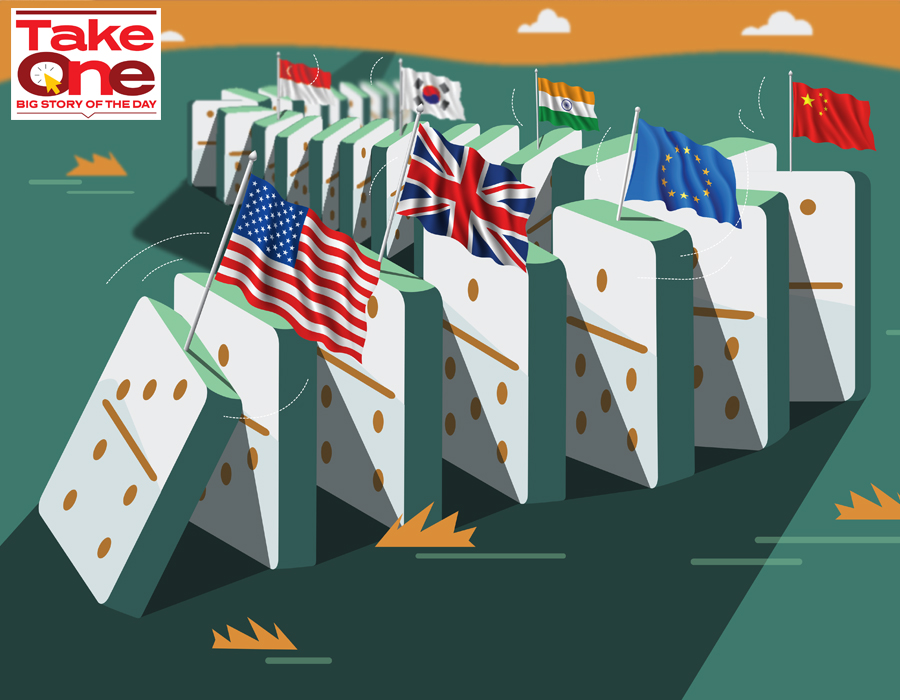 In the past recessions, Asian economies contracted much more than the US economy. However, in the current situation, emerging economies are estimated to contract by 1.5 percent as against the US economy’s 2.8 percent
Illustartion: Chaitanaya Dinesh Surpur

When the US sneezes, the world catches a cold. So goes the saying. There has been chatter about a slowdown in the world’s largest economy. But now the most telling indicator of an economic recession in the US—the inverted yield curve—is blinking red. The inversion of the bond market’s yield curve has foretold past US recessions: The dotcom bubble crash in 2000 and the global financial crisis that began in December 2007. This has amplified growth concerns across emerging economies.

US Inflation raced to a multi-decade high of 9.1 percent last month and the US Federal Reserve is expected to hike rates by 75 to 100 basis points in its meeting next week to rein in rising prices. “Commodity prices are rolling over quickly; they correlate very highly with inflation. Add that to the base effect of a high rate of inflation in the second half of last year. We think inflation can come down quickly but it will settle closer to 3 percent than 2 percent,” says Mark Matthews, head of Asia Research at Julius Baer.

Evidently, the inverted or negative yield curve—formed when short-term rates rise above long-term rates—is currently at levels not seen since 2007. Brokerage firm Nomura expects a shallow but long recession of five quarters in the US. “We believe the US will enter a mild recession in the fourth quarter of this calendar year. But unlike previous recessions, household balance sheet conditions are relatively healthy,” says Aurodeep Nandi, VP and India economist, Nomura.

By definition, a recession generally indicates two consecutive quarters of a decline in real GDP. But during 2008 and 2009 the US economy contracted by 4 percent over four quarters and 10.1 percent in the first six months of 2020. So, this definition can’t be taken as a rule of thumb. Moreover, the National Bureau of Economic Research depends on a variety of economic activity indicators to call out a recession in the US.

“At this point, our indicators only put a 20 percent probability on a recession occurring in the next 12 months. However, the Atlanta Fed’s GDPNow forecast for the second quarter is indicating around a 2 percent y-o-y contraction, and if the third quarter is again contractionary, then of course technically we would be in a recession already,” says Matthews. 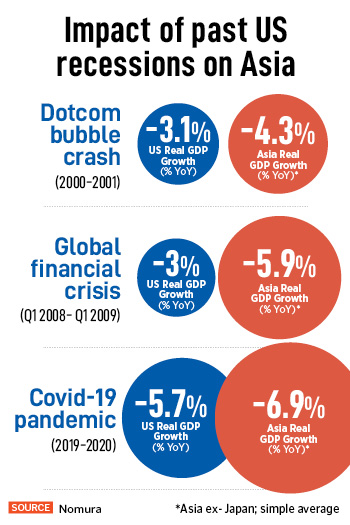 While most economists and global brokerage houses do not rule out an upcoming recession in the US, they differ on the timing of the event. Plus, the magnitude of the recession depends on several moving parts such as the geopolitical situation and the rampant surge in inflation (See table - "Inflation surges"). In the past recessions, Asian economies contracted much more than the US economy. However, in the current situation, emerging economies are estimated to contract by 1.5 percent as against the US economy’s 2.8 percent (See table - "Impact of past US recession").

“Global economic macros are under unprecedented chaos currently. It’s tough to say whether there will be a soft landing or a full-blown recession,” says Neelesh Surana, CIO, Mirae AMC. However, one thing is certain, emerging and developed economies will not escape unscathed from the storm (See map - "Global business cycle").

Global growth forecasts have been trimmed for 2023 largely due to the unfolding economic slowdown in the US, Europe, and China (See table - "GDP growth outlook for 2023"). “The global economy has had a turbulent few years, and the tribulations have not receded. Concern is palpable that central banks will not be able to engineer a soft landing amidst the race to tame inflation,” says Katrina Ell, senior economist, Moody’s Analytics. 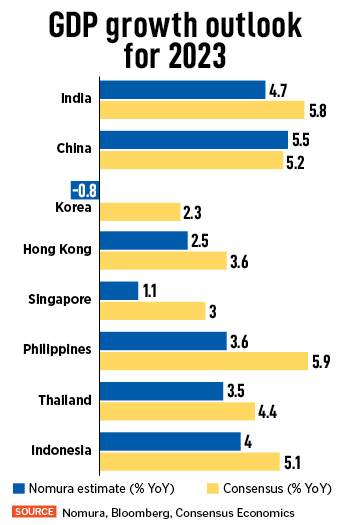 Economists believe countries cannot depend on exports to drive growth. Europe, UK, Japan, South Korea, Australia and Canada are likely to be more impacted than others, and could slip into a recession over the next 12 months. Domestic-demand-driven economies like India, China, Indonesia and the Philippines are expected to be more resilient to the downdraft.

However, the downturn in the global economy will hurt Asia’s exports. For example, the slowdown in demand from US markets is likely to bite into the demand for domestic technology services. The US dollar, seen as a haven during periods of economic turmoil, is at its strongest in over 20 years, and many emerging market currencies have cracked under the pressure (See table - "EM currencies crack under pressure"). The Indian rupee has declined nearly 7 percent this year and hit a fresh low beyond 80 per dollar.

Also read: Of superheroes and the threat of a global recession

In focus: India and China

Nandi is convinced India will feel the impact of the US slowdown. “The US is one of the top trading partners so there is going to be a direct hit there. If this is part of a global slowdown then it means that export demand in other markets will also be hit. There are certainly downside risks to growth because of the US recession, particularly in 2023,” he adds.

India is grappling with high inflation, weak growth, fiscal challenges, currency headwinds, and a rising current account deficit. China is reeling under economic slowdown and the government’s Zero-Covid policy. However, it is expected to recover with the support of the Chinese government’s accommodative stimulus packages to spur growth. The PBOC recently cut interest rates to support recovery.

Inflation, earnings downgrades, and rating downgrades are key risks facing the Indian economy in the coming months. “The Indian economy is quite insulated because it is driven mostly by domestic consumption and investment. The Indian market, however, is an open one, were the US market to go down sharply, it would be hard for the Indian one to stay flat,” says Matthew.

Surana is cautious of rising commodity prices. “Most risks are global—high oil price, increase in interest rates and global recession are the top three risks. Among these, crude oil is the key risk as it has a multiple impact on balance of payment, inflation and interest rates. Conversely, stability in oil will improve Indian macros significantly,” he says. Against this backdrop, the fund manager advises investors to focus on a bottom-up investment strategy.

“Businesses need to be seen from a long-term lens, while macros are generally more near-term noises. From a sectoral viewpoint, IT services and Metals sectors are the most fragile to recession, whereas most other sectors should be able to weather these global headwinds. Our sectoral preference is towards banking, healthcare, insurance, utilities and consumer sectors like autos. We do believe that valuations are more reasonable, and it’s a good time to identify and invest,” says Surana.

Between the US, China, and India, investors remain overweight the US. “We would put the US first, India second and China third,” says Matthews.