For central bankers, the world has changed abruptly. After more than a decade of low inflation and interest rates, policymakers are now in an environment of high inflation, where there is not time for ponderous decisions — only swift and decisive action 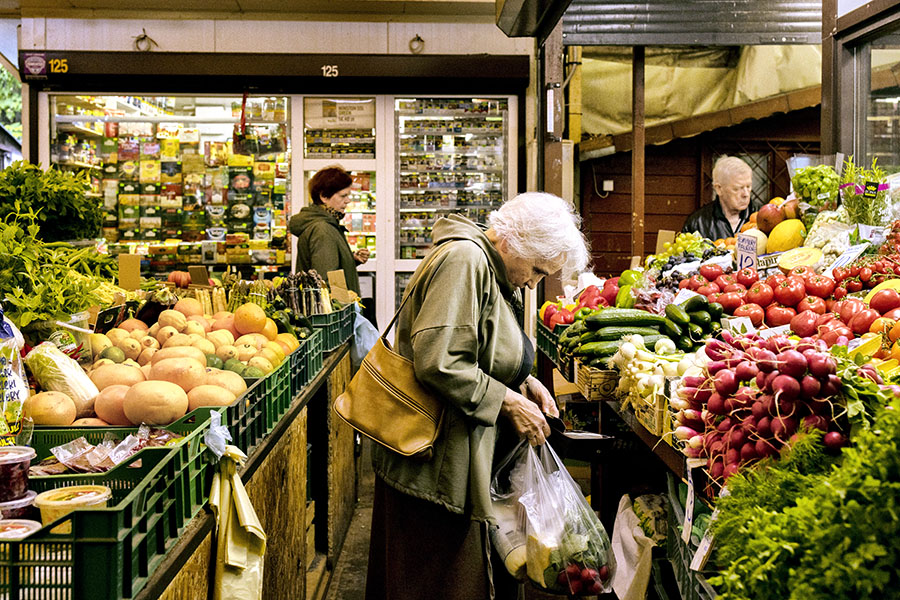 People shop for produce in Warsaw, Poland, May 25, 2022. After more than a decade of worrying about low inflation, the European Central Bank is trying to tackle the problem of high inflation across the eurozone’s economies. (Maciek Nabrdalik/The New York Times)

SINTRA, Portugal — For central bankers, the world has changed abruptly. After more than a decade of low inflation and interest rates, policymakers are now in an environment of high inflation, where there is not time for ponderous decisions — only swift and decisive action.

This was the verdict among policymakers and economists who gathered in a luxury golf resort northwest of Lisbon, Portugal, this past week for the European Central Bank’s annual forum.

Since 2014, this annual meeting in Sintra has been preoccupied by one major goal: how to stoke inflation in the eurozone.

Not this year. Amid vast global supply chain disruptions, a war in Ukraine and soaring energy prices, policymakers are confronting the opposite challenge. Inflation is the highest it has been in decades. On Friday, data showed the annual rate of inflation in the eurozone climbed to 8.6% in June, yet another record.

But while the outlook for price growth has many variables outside the central bank’s control — such as the length of the war and the future of energy supply from Russia and elsewhere — the message to central bank officials was clear: The buck stops with you.

Looming over the panel discussions and presentations were memories of past crises, including the 1970s era of global stagflation and the euro sovereign debt crisis about a decade ago. Like many other advanced economies, Europe is trying to steer clear of the trap of stagflation — a period of stagnant economic growth and uncomfortably high inflation — but it is also attempting to raise interest rates without setting off panic in government bond markets about the finances of the region’s more indebted countries.

“Monetary policy is at a difficult juncture,” Christine Lagarde, president of the ECB, said at the forum’s opening Monday, a statement no one in the room disagreed with.

Also read: Of superheroes and the threat of a global recession

Over the next two days, she reiterated the central bank’s plan to raise interest rates for the first time in more than a decade in July by one-quarter percentage point and again in September with an increase that is likely to be even larger. Rates are expected to keep rising from there, in keeping with a principle of “gradualism.”

The risk of persistently high inflation outweighed concerns that the region’s economy was slowing down. There might not be a return to the world of low inflation that has dominated for the past few decades, Lagarde said. Inflationary forces had been “unleashed” by the COVID-19 pandemic and war in Ukraine, she added.

After a two-year hiatus from meeting in person because of the pandemic, the collegial mood was run through with the somber message of the severity of the challenge central bankers faced.

Despite growing mountains of economic, business and financial markets data, working out where people think inflation is going to go is still, to some extent, like reading tea leaves. One panel discussed how hard it was to know whose inflation expectations were the most useful for predicting inflation — households’, businesses’ or financial markets’ — and how there was still no precise way to know if long-term expectations have risen above the central bank’s target, a dangerous situation that would perpetuate high inflation.

But policymakers cannot risk waiting to find out, Loretta J. Mester, president of the Federal Reserve Bank of Cleveland, told the audience. “Central banks are going to need to be resolute, and they are going to be intentional in taking actions to bring inflation down,” she added.

And these actions might be painful for people, warned Jerome Powell, chair of the Federal Reserve, a conclusion Lagarde agreed with. But, he said, it would be more painful to let high inflation become persistent.

The ECB is only just starting to raise interest rates, months behind its U.S. counterpart. High inflation is a worldwide problem, but for a while, the difference in the sources of price increases allowed the ECB to take a slower approach. High energy prices and global supply chain disruptions are not phenomena the bank can stop by raising interest rates. Unlike the Fed, European policymakers are not trying to cool down an overheating economy. In Europe, consumption has not even recovered to its pre-pandemic levels.

What makes today different from the 1970s is that central bankers can act more aggressively and are more active, said Hilde C. Bjornland, an economics professor at BI Norwegian Business School, in a presentation of the recent increase in oil prices and how that weighs on the European economy and affects inflation expectations.

What has not changed for the central bank is that it is still holding together a monetary union — the eurozone — without the supporting infrastructure of a fiscal union, banking union or capital markets union.

It has to supply one policy for 19 economies. In June, inflation ranged from 6.1% in Malta to 22% in Estonia.

“That is one of the issues for the euro area and the European Union to tackle,” said Martins Kazaks, the governor of the central bank in Latvia, where inflation has hit 19%. “The institutional architecture of the euro area and European Union is by no means complete.” Fiscal policy needs to step in and provide support for the most vulnerable, but it has to be targeted and time-limited, unlike pandemic support programs, he added.

“In the current situation, when inflation is so high, monetary policy will need to tackle the problem of inflation,” he said. “We will not go the same way as fiscal policy.” He has suggested that the rate increase in July might need to be larger than the one-quarter point currently telegraphed. Gradualism “doesn’t mean slow,” Kazaks said.