Many customers complained that the MacBook's butterfly keyboard made characters repeat when pressed or they didn't show up at all. Some said the keys felt sticky and didn't respond consistently, and the typing meltdowns had motivated a class-action lawsuit filed in 2018 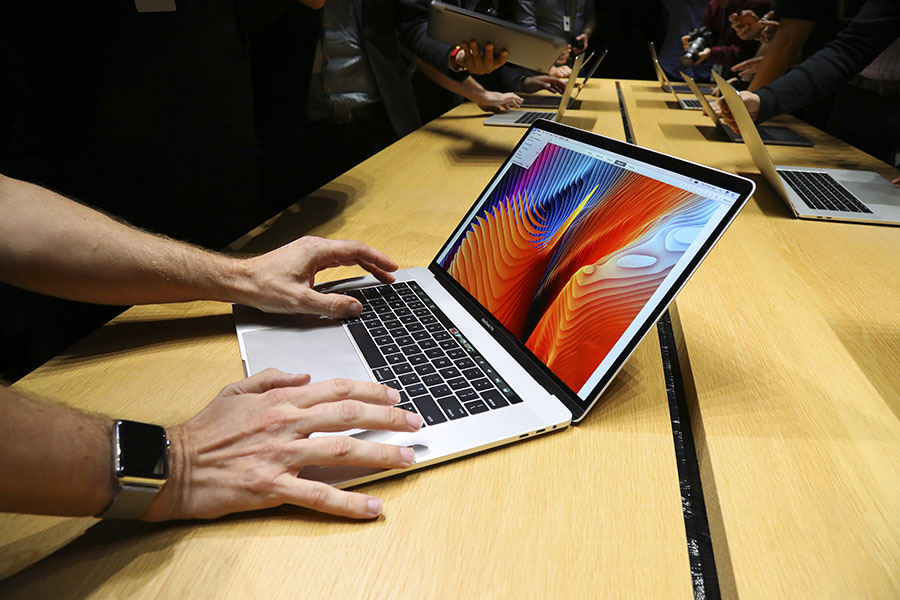 A new MacBook Pro model during an unveiling at Apple headquarters in Cupertino, Calif., Oct. 27, 2016. Apple proposed a $50 million settlement on July 18, 2022, for defective MacBook keyboards, in response to a class-action lawsuit by customers who sought repairs for the butterfly keyboard, released in certain laptops from 2015 to 2019. (Jim Wilson/The New York Times)

Apple agreed Monday to pay a $50 million settlement on a class-action lawsuit over so-called butterfly keyboards, a component of some MacBook laptops that left many users fuming in key-smashing frustration over typing failures.

The butterfly keyboard, a thinner model that aimed to provide more precision, ended up not being as graceful as the flapping wings of the nectar-seeking creature. Many customers complained that characters were repeated when pressed or didn’t show up on their screens at all. Some said the devices had keys that felt sticky and didn’t respond consistently.

The typing meltdowns motivated a class-action lawsuit filed in 2018, which led to the settlement filed Monday night after four years of litigation in the San Jose Division of the U.S. District Court in the Northern District of California. Apple said the agreement did not represent an admission that it was at fault.

“Plaintiffs are pleased to submit for court approval their $50 million settlement with Apple that would resolve many years of litigation over the MacBook butterfly keyboard,” Grille and Steven A. Schwartz, a plaintiff, said in a statement. “MacBook purchasers across the country are eligible to participate.”

As a result of the agreement, Apple could soon make amends to MacBook users who got repairs on a laptop with a defective butterfly keyboard from 2015-19. Customers said the company knew about the defect on these MacBooks; Apple offered free repairs to customers with the defective keyboards in 2018 and then phased them out.

The company has proposed to pay amounts ranging from $50 to $395 to customers who were affected.

The lawsuit represents purchasers of about 15 million computers, the court documents said.

Apple “vigorously denies liability,” the court documents said. The company did not respond to a request for comment.

“The proposed settlement to resolve this case is not an admission of guilt or wrongdoing of any kind by Apple,” the agreement said.

Anyone in the United States who received repairs for keyboard issues for MacBooks purchased from 2015-17, MacBook Pros from 2016-19 and MacBook Airs from 2018-19 can claim a share of the settlement. The company will consider customers who received replacements of a “topcase” — which includes the battery, the touch-sensitive pointing device known as a trackpad, the speakers and the keyboard — or of a “keycap,” which refers to the covers for letters on the keyboard.

“All settlement class members who went to Apple or an authorized service provider and received a ‘topcase replacement’ or a ‘keycap replacement’ within four years after the date they purchased their class computer are eligible for a cash payment,” the court documents said.

Customers will be sorted into one of three groups, depending on the scale of repairs their devices received at the time.

The first group includes people who obtained two or more topcase replacements, the court documents said. They will be paid a maximum of $395.

The second group — users who received a topcase replacement that didn’t resolve their issues — will receive up to $125. The third group includes people who replaced a keycap but not the entire topcase. They will be eligible to up to $50.

Many customers will be contacted by Apple, but people can also submit claims with documentation proving that repairs were done.

Plaintiffs representing the consumers intend to apply for awards of up to $5,000 each from the settlement money, the court documents said.

Apple introduced the troubled keyboards with an “all-new MacBook” in 2015. The butterfly referred to a novel switching mechanism that expanded like wings under the keys, differing from the more common and thicker switches shaped liked scissors. The keyboard was billed as “34% thinner” and “four times more stable” than the earlier scissor model. But it also seemed prone to capturing dust and experiencing other problems. Soon the customer complaints began.

Over the next five years, Apple tried to modify the keyboard in updated models before abandoning it completely by 2020, when all of its laptops included a redesigned and well-received keyboard that restored the scissor switches.

Tweets by @forbesindia
Snap shares plunge 25% as losses triple
Asia: Looking the US recession in the eye?