For India's efforts to ban disposable plastic, one state offers a playbook

Tamil Nadu was not the first state in India to try to curtail plastic pollution, but unlike others, it was relentless in enforcing the law. It's far from an outright success but the state's experience offers lessons for the rest of India, where an ambitious countrywide ban on making, importing, and selling and using some single-use plastic took effect this month 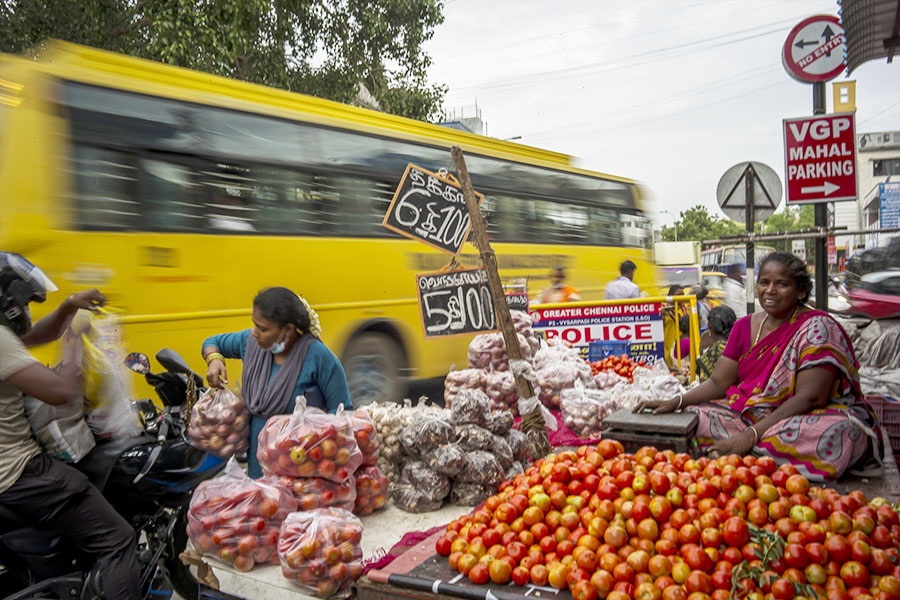 Produce hawker Amul Vasudevan, who was fined repeatedly for using throwaway bags, along a busy road in Chennai, India, July 7, 2022. India’s state of Tamil Nadu was not the country’s first to try to curtail plastic pollution, but unlike others it was relentless in enforcing its law. (Anindito Mukherjee/The New York Times)

CHENNAI, India — Amul Vasudevan, a vegetable hawker in the southern Indian state of Tamil Nadu, thought she was going to go out of business.

The state had forbidden retailers to use disposable plastic bags, which were critical for her livelihood because they were so cheap. She could not afford to switch to selling her wares in reusable cloth bags.

Tamil Nadu was not the first state in India to try to curtail plastic pollution, but unlike others, it was relentless in enforcing its law. Vasudevan was fined repeatedly for using throwaway bags.

Now, three years after the ban took effect, Vasudevan’s use of plastic bags has decreased by more than two-thirds; most of her customers bring cloth bags. Many streets in this state of more than 80 million people are largely free of plastic waste.

Yet Tamil Nadu’s ban is far from an absolute success. Many people still defy it, finding the alternatives to plastic either too expensive or too inconvenient. The state’s experience offers lessons for the rest of India, where an ambitious countrywide ban on making, importing, selling and using some single-use plastic took effect this month.

“Plastic bags can only be eliminated if the customer decides it, not the seller,” Vasudevan said from her stall on Muthu Street in Chennai, the state capital. “Getting rid of it is a slow process; it can’t happen overnight.”

Across India’s metropolises and villages, daily life is intertwined with disposable plastic, considered one of the worst environmental hazards. Shopping of all sorts is carried home in throwaway bags, and food is served on single-use dishes and trays. The country is the world’s third-biggest producer of disposable plastic waste, after China and the United States. 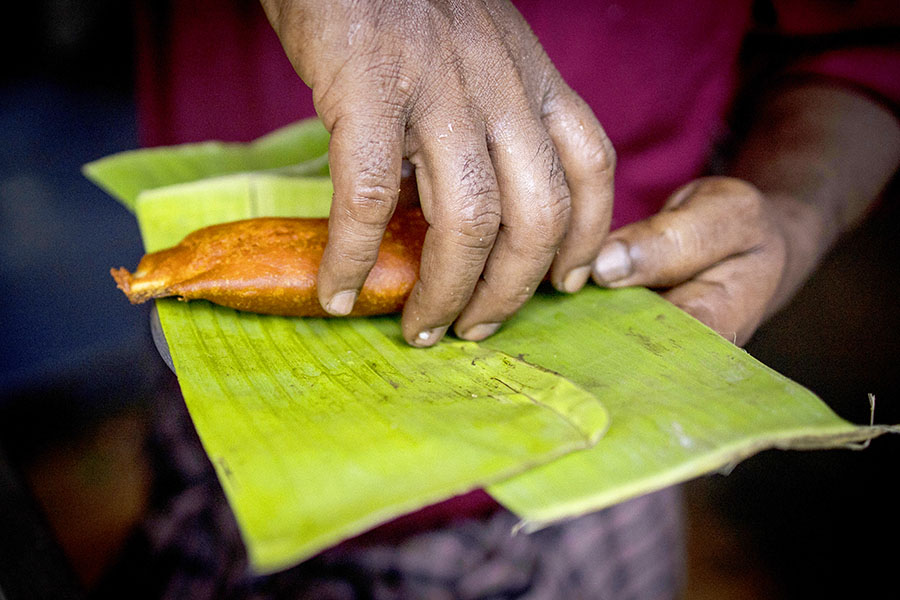 A roadside vendor serves food on banana leaves, a traditional way of plating or wrapping that is gaining popularity in the face of a ban on disposable plastics, in Chennai, India, July 7, 2022. India’s state of Tamil Nadu was not the country’s first to try to curtail plastic pollution, but unlike others it was relentless in enforcing its law. (Anindito Mukherjee/The New York Times)

But now Prime Minister Narendra Modi’s government has banned some of those ubiquitous items, including disposable cups, plates, cutlery, straws and ear swabs. Single-use bags are forbidden, but thicker, reusable ones are allowed. The ban does not include soda bottles and plastic packaging for chips and other snacks.

India follows places such as Bangladesh, the European Union and China in a large-scale effort to reduce plastic waste. But its plan is among the most ambitious, experts said, as it targets the entire supply chain, from the making to the use of disposable plastics.

What remains to be seen is how committed authorities will be to enforcing the new law.

“A blanket ban is very difficult to implement unless local governments take strict actions against the violators and build partnership with people,” said Ravi Agarwal, who heads Toxics Link, an advocacy group that focuses on waste management. “Otherwise we will end up with some sporadic fines here and there, and some newspaper reports.”

Public pressure on politicians — to fix drain and sewage blockages caused by plastic, for example — is another key reason for the relative success in Tamil Nadu. 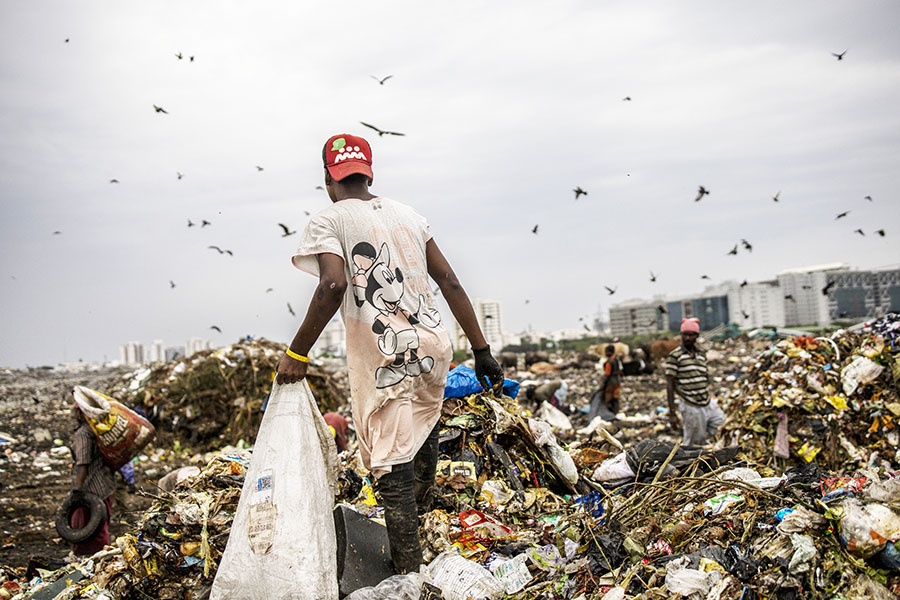 A ragpicker hunts for useful plastic items at a garbage dump in Chennai, India, July 7, 2022. India’s state of Tamil Nadu was not the country’s first to try to curtail plastic pollution, but unlike others it was relentless in enforcing its law. (Anindito Mukherjee/The New York Times)

On a recent Friday morning, plainclothes police officers milled about Muthu Street, hunting for perpetrators. Near a section of hawkers selling vegetables and jasmine flowers, they found a street vendor bagging up produce for customers in disposable bags. Police fined that vendor and proceeded to seize dozens of pounds of the contraband from others, fining them and threatening them with prison.

Since December 2019, authorities in the state have collected more than $1.3 million in fines; the smallest is about $7. But the job is never-ending — after the officers dispersed that day on Muthu Street, some vendors resumed using the banned bags.

“We have to find cheap solutions to stop the use of plastic bags,” said Vasudevan, who was not fined that day. “The rich understand what is at stake, but for the poor, the government has to make cloth bags cheap.”

Tamil Nadu has tried to address that issue with subsidies and campaigns promoting cloth bags.

At the entrance of Chennai’s Koyembedu wholesale market, authorities installed two vending machines that hold 800 cloth bags, which go for 12 cents each.

But for some businesses, such as those selling live fish, plastic is hard to replace. “No one wants to destroy the environment,” said Mageesh Kumar, who sells pet fish at the Kolather market in Chennai. “But if we don’t sell them in plastic, there is no other way; how will we feed our families?”

For now, Kumar and his cohort are using thicker bags that they ask customers to return.

Still, Tamil Nadu has made more progress than other states that have tried to curtail plastic use. Its beaches, residential enclaves and industrial areas are largely devoid of plastic litter. Many residents dutifully collect plastic for recycling and separate waste.

The trailblazer in the state was the district of Nilgiri, an area popular with tourists for its hill towns and tea plantations, which banned disposable plastic in 2000. There, the charge was led by Supriya Sahu, a civil servant who realized the dangers of plastic pollution after she saw pictures of dead bison with plastic bags in their stomachs. She started a public-awareness campaign.

“We made people understand that if you want tourism to survive, we have to stop using plastic,” said Sahu, who is now a state-level environmental official. “Any government-led program can only be successful if it becomes a people’s movement.”

On a recent humid afternoon, the Koyembedu market offered a sign of success. Out of more than two dozen shops, only two were selling flowers packed in plastic.

“We have been selling flowers wrapped in newspapers for years now,” said Richard Edison, a flower seller. “People are demanding it.”

Tweets by @forbesindia
How the weakening rupee is impacting study plans in the US
These are Top 10 cities in the world in 2022: study