From an internship in Walt Disney Co.'s DVD department in 2002, Kareem Daniel has climbed the ladder to a rung involving movie distribution strategy, then to business development for consumer products and interactive media, and more, after he abandoned the safety of an engineering career for his dream—the movie business 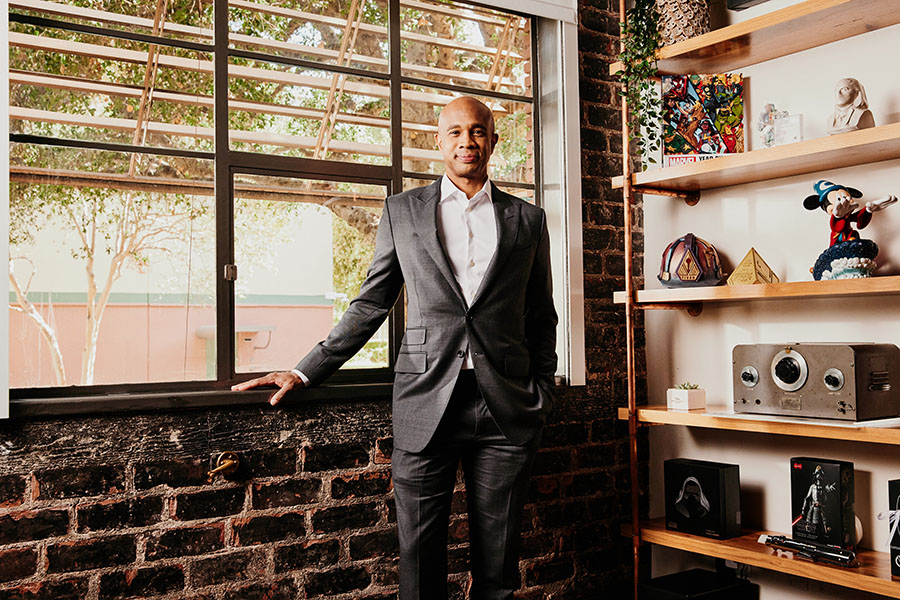 Kareem Daniel, the first Black executive to run a major division in Disney’s 99-year history, at the company’s studio in Burbank, Calif., May 10, 2022. The colossal job of chairman of Disney Media and Entertainment Distribution, which was created to give priority to the company’s streaming services, has made the little-known Daniel one of the entertainment industry’s most powerful executives. (Adam Amengual/The New York Times)

Kareem Daniel was on crutches in the spring of 2002. He had broken his right ankle playing basketball. But Daniel had no time to convalesce: A self-imposed clock was ticking on his attempt to change careers — to abandon safe-and-steady electrical engineering, a field that his parents had pushed, for the wild-and-woolly movie business, which was his dream.

So he hobbled to his car, and stared down a sign on the freeway: Los Angeles, 404 miles.

Daniel interviewed all over Hollywood and was rebuffed. Just as he was about to give up, he heard about an internship in the DVD department at the Walt Disney Co. It was supposed to be a phone interview, but Daniel pushed to meet in person. (“I wanted in the room,” he said.) The low-level Disney executive conducting the interview, Bob Chapek, hired him nearly on the spot.

“I’m not here today without that,” Daniel said. “It changed everything.”

Over the next 20 years, as Chapek rose to become Disney’s CEO, the unremitting Daniel climbed with him — to a rung involving movie distribution strategy; then to business development for consumer products and interactive media; and ultimately to Imagineering, Disney’s theme park design division, and back to consumer products. In 2020, at the height of the coronavirus pandemic, Chapek made Daniel chair of a new division, Disney Media and Entertainment Distribution, which was created to give priority to the company’s streaming services (Disney+, Hulu and ESPN+) and to guarantee they receive a steady flow of Disney’s best content.

In short, Chapek entrusted Daniel with streaming subscriber growth, an all-important task that has come under increased Wall Street scrutiny in recent months, ever since Netflix started to lose subscribers, shaking Hollywood.

It is a colossal job that has made the little-known Daniel, 48, one of the entertainment industry’s most powerful executives. In some ways, he is Disney’s top content traffic cop, deciding whether $33 billion in annual film and television content gets routed to streaming, traditional TV channels or theaters. Should the next Pixar movie debut exclusively in theaters? Or should it be made instantly available “for free” to Disney+ subscribers? Pixar will be asked for input, but Daniel and his team will make the final call.

“Ultimately, we will make the best decisions that we feel are right for the consumer,” Daniel said.

Chapek gave Daniel global operational and profit-and-loss responsibility for Disney’s streaming services, as well as for traditional channels like ABC and ESPN — turf that previously belonged to Disney’s film and television content divisions. He oversees all advertising sales. Daniel, the first Black executive to run a major Disney division in the company’s 99-year history, also has partial oversight of Disney’s effort to build its version of the metaverse, in which the online, virtual and real worlds coalesce.

Also read: A matter of survival for Disney Star, as competition intensifies for IPL media rights

It would be enough to stretch even a seasoned CEO to the brink. But Daniel, a confessed workaholic with a reputation as a tough boss, came across as untroubled in a May interview at Disney’s headquarters in Burbank, California.

Never let them see you sweat?

“I’m comfortable being uncomfortable, especially in a new position,” Daniel said with a smile. “I try to get up to speed quickly, working very hard, trying to understand as quickly as possible what the needs are, knowing that I don’t have to be the expert in a room. I need to manage experts.” (Nine people report directly to him. They have an average of 18 years of experience at Disney.)

The already intense pressure on Daniel and his division (referred to as “D-Med” inside Disney) is about to become more extreme. Disney+ has grown to 138 million subscribers worldwide, up from 70 million when Daniel took it over, but the easy growth is past. This month, Disney refused to pay an exorbitant premium to keep streaming rights to popular cricket matches in India, something that could hamper the company’s quest to reach 230 million to 260 million Disney+ subscribers globally by 2024. Analysts expect Disney to lower that guidance as part of its August earnings report, while doubling down on a commitment to make Disney+ profitable by 2024. Disney declined to comment.

Daniel’s team is also poised to roll out a cheaper, ad-supported version of Disney+. But the ad market has been weakening.

Chapek has confidence in his protégé’s ability to deliver. “Kareem is a Renaissance man,” he said in an email. “When you combine his experience and incredible business sense with his love for the art of storytelling and deep respect for the creative process, it’s a recipe for success.” (While Chapek has had a difficult year, with Disney becoming a political punching bag and his firing of a senior TV content executive generating criticism in Hollywood, the Disney board is poised to renew his contract.)

But others are less convinced that Daniel is ready for this big of a gig. Some inside Disney were stunned by his promotion, noting that Daniel had only been in his previous role as president of consumer products — a relatively small unit — for six months.

Movies have been a passion for Daniel since childhood. He grew up on the South Side of Chicago, where his mother was a nurse and father a professor. He spent most Saturdays at the Evergreen Plaza multiplex. When it came to picking a career, however, his parents insisted on practicality — hence his dutiful decision to study electrical engineering at Stanford University.

At Disney, he is known for peppering conversations with movie lines, sometimes playfully testing subordinates to guess their origin. He collects original movie posters. Over dinner with a reporter, he discussed the plot intricacies of Paul Thomas Anderson’s “Phantom Thread,” about a couturier in 1950s London, and recited lines from “The Breakfast Club” and “The Color of Money.”

He has attended the Sundance Film Festival 21 times. “He sees more movies at Sundance than almost anyone, and he does it because he loves it,” said Sean Bailey, president of Walt Disney Studios Motion Picture Production.

There have been moments of tension. For the most part, Daniel has navigated the arrangement smoothly. “He’s a charismatic guy who has handled the reorganization with generosity and empathy and intelligence,” Bailey said. From a numbers standpoint, the growth of Disney+ has exceeded expectations under Daniel, while traditional TV channels have also held their own; ABC ended its season as the No. 1 entertainment network.

It helps that Daniel knows Disney backward and forward.

Daniel may also be the only person at Disney who could quite literally knock Chapek down and live to tell the tale.

At a recent ESPN town hall, Daniel was pressed to recount how, at a management retreat, he collided with Chapek while playing softball. Chapek was playing first base, Daniel hit a slow roller up the first base line, started running and … kersplat.

“We got a little aggressive,” Daniel told the ESPN crowd sheepishly.