Netflix's survival requires the platform to move from a gateway to a destination. The faster this is done, the better for Netflix, and more importantly, for consumers who will engage with the Netflix world instead of being subscribers who share passwords 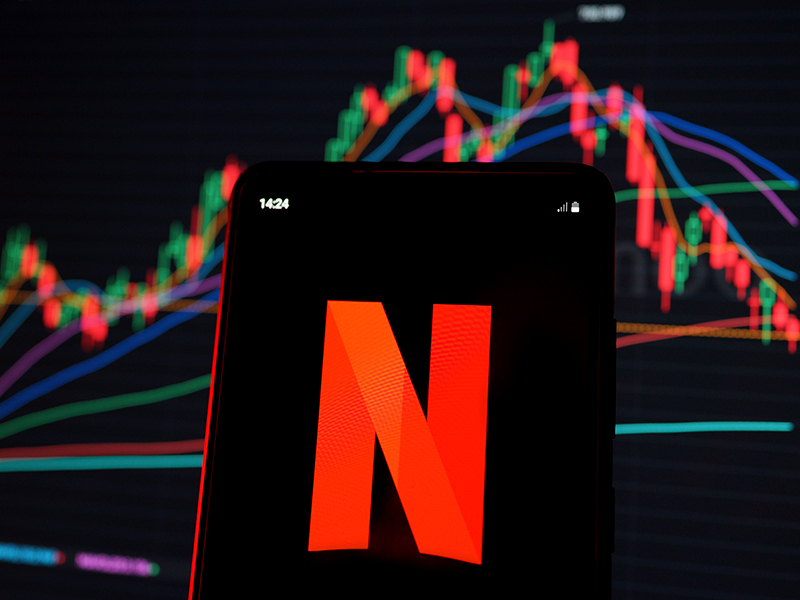 Netflix’s loss of 200,000 subscribers in less than 100 days to March 2022 has been surprising and yet, in hindsight, quite inevitable Image: Shutterstock

“You can have mine”—be it a pencil during a kindergarten exam or one earpiece of a pair of earphones, or even a Netflix password, the tendency to share is innately human. A business model that views sharing as a threat is simply swimming against the current.

Netflix’s loss of 200,000 subscribers in less than 100 days to March 2022 has been surprising and yet, in hindsight, quite inevitable. For over 20 years, this much-vaunted disruptor of the movie industry has played the same game. The decline in subscriber numbers is just another indicator that it is time Netflix recalibrates its business model which is no longer the recipe for success that it once was. Indeed, the growing young population in the so-called emerging markets might well have been prolonging the death of a cracking business model that has ceased to be about customer value.

And now, the fault lines are beginning to show (see Figure 1). An additional 200 million subscribers are expected to leave Netflix in the next three months to July. 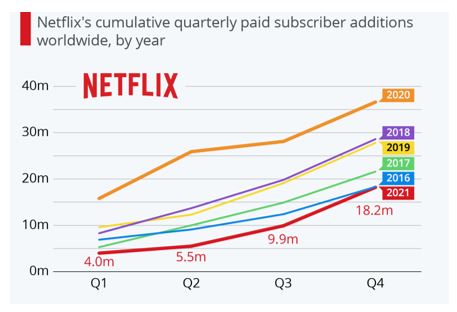 The decline in subscriber numbers is just one of the slew of problems Netflix has been facing in recent times, including unhappy customers blaming content and pricing. The stock market has begun to factor this in. Netflix's share price fell by over $122 on April 20—a decrease of over 35 percent in one day and a fall of $35 billion in market capitalisation. The fall in share price, accompanied by billionaire investor William Ackman’s share sale of $1.1 billion at a loss of $400 million, is just a lagging indicator of the problem on hand.

Does all this mean that Netflix will soon be out of business? Or worse, now that the poster child of the content aggregator business model is in dire straits, that the business model of OTT players itself is a failed one? Well, a close look tells us that the business model still provides tremendous scope for development, but only if Netflix and the like are ready to face realities related to subscription, pricing, advertising, passwords, and content, and adopt an ecosystem perspective.

The psychology of subscription

Netflix is primarily a content aggregation platform; its most important purpose from the perspective of a customer is the wide range of movies, TV shows, and other content that they can choose from and watch at will. This means that Netflix collects content from content publishers and distributes it to customers. This is where the business model stops, which makes Netflix nothing more than a television channel delivered on the internet, in other words, a gateway to content. The subscriber pays to keep the gateway open. Remember the days of cable TV subscriptions and channel zapping? The OTT subscription customer is no different.

In the subscription business, the law of inertia tends to work in favour of the OTT platform. Because the customer has to expend effort to end the subscription, they do not do so without a compelling reason to reject the platform. Netflix seems to have given its subscribers reasons to leave—part of the reason being the content itself. Social media platforms are rife with customer unhappiness with quality, variety, political correctness, and regulation of content on Netflix.

The problem of pricing

Content issues aside, the loss of subscribers also points to issues with pricing model of Netflix, which is a pure subscription model. Currently, the pricing at Netflix is simple—a gate fee and a free for all ones the gate has been passed. Compare this with a Disney amusement park. A gate fee, the same for everybody, followed by a free choice of any ride that one chooses? Sounds ridiculous.

Raising prices is hardly a strategy that makes business sense. The path toward raising subscription charges that Netflix has been following in the recent past is fraught with subscriber losses and negative customer opinions. As prices are raised, customer attitude falls and customer engagement—time spent on the platform and word of mouth of the platform and its content—falls drastically, leaving space for competitors (who are no longer highly differentiated from Netflix or each other).
Raising prices is particularly counterproductive for a subscription service because a good subscription service is an integral part of its customer’s life. Increasing perceived costs (by increasing prices) without increasing perceived benefits (better recommendations, content curation, social media integration, and so on) is one of the least clever plays in a highly competitive, undifferentiated game. Why not consider a pay per minute pricing, with different rates for each movie or show depending on its popularity and quality?

The adversary that is advertising

Is the solution to the pricing problem to include advertising, as Netflix now intends to do? Bring in advertising and charge lower subscription fees. But the whole purpose of paying for a subscription—on TV and OTT—was to get rid of the nuisance of advertising. However, until the brave new world of perfectly relevant advertising arrives, adding advertising to subscriptions will set alight a whole host of new problems.

In the case of Netflix, bringing in advertising is likely to cause a major backlash and further loss of customers. The company is aware of this when co-CEO Reed Hastings referred to customers as “advertising tolerant.” Advertising as a revenue stream is an unimaginative value killer just like surge pricing in taxi aggregators—at least in price-sensitive markets. Because advertising punishes consumption. The question is not whether advertising will be tolerated, but how long before an imaginative new company comes up with an advertising-free revenue model.

Netflix clamping down on password sharing indicates how business logic attempts to undermine consumer psychology. Sharing resources and sharing content is a consumer instinct—I find something I like (a movie, in the case of Netflix) and I want to share it with my best friend! The same reason Netflix’s 222 million subscribers share their passwords with an additional 100 million consumers.

Instead of coercively preventing customers from sharing the password for a subscription (or worse, restricting password usage by location, which makes life difficult for customers who travel), it is time to adapt to what customers like to do—watch content and talk about it. And find ways to monetise that. For example, give them points for watching and talking about what they watch, as Shein, the runaway successful Chinese fast fashion company does so well (for now).

The content in itself is no longer the magic it was a decade or two ago. Indeed, the wider the content collection, the more difficult it is for consumers to select what to watch if they were to attempt selecting. And yet, the wider the content collection, the fewer consumers are satisfied because there is always another platform that provides something else. The solution here might lie in three additions to the current platform:

What Next – The Consumer-Centric OTT Ecosystem

A simplified view of today’s content consumption ecosystem (Figure 2) revolving around the consumer shows that consumers do not just consume content as it is provided. Instead, consumers:
•    Seek information on the content they (intend to) consume (e.g., movie reviews)
•    Want to talk about the content they love or hate (e.g., as they do through social media)
•    Desire content made by or featuring people like them (e.g., content made by small creators).

Figure 2. A consumer-centric view of the content consumption ecosystem 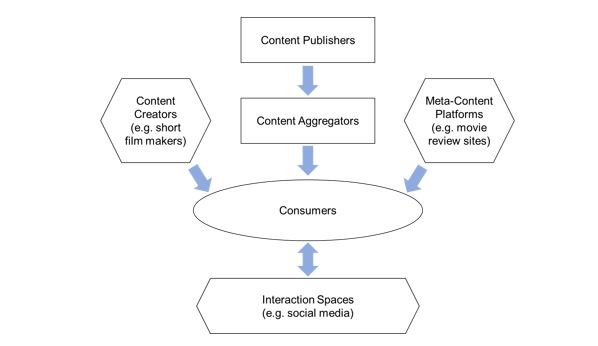 Today, the business model of Netflix encompasses only two blocks of this ecosystem, content publisher and content aggregator. It makes Netflix merely a conduit for content. But the time when an OTT platform could awe consumers merely through content is gone. That was at least a decade ago. Today, every OTT platform has content, and that is no longer sufficient to keep the consumer. Instead, a platform such as Netflix needs to look beyond its current forte—a pure-play “conduit” business model to a diversified “ecosystem” business model that, once again, provides novel and relevant customer value as the Netflix of old did.

And so, here is the Netflix business model of today (green) and a potential model for the future that adds at least three components (blue, in the short term, and red, at least in the long term) (see Figure 3).

Figure 3. Strategic directions for Netflix in the content consumption ecosystem 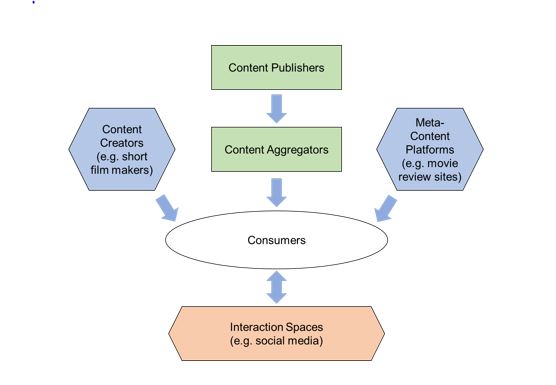 Today’s model was right for the last decade and earlier, but it will not be the model of the future, if Netflix were to fix itself (or be fixed by an acquirer). Netflix needs to provide meta-content such as movie reviews, ratings, content comparisons, and so on so that consumers have more than the movies and shows to engage with—an IMDb within Netflix, so to speak. Content needs to come from creators who are consumers, creators whom Netflix consumers perceive to be “just like us”, something that YouTube has been doing all this while. And most important, Netflix needs to own and co-create an interaction space where consumers can talk about and revel in the content they care about. Something that Pinterest, Instagram and even LinkedIn figured out years ago.

All said and done, Netflix’s survival requires the platform to move from a gateway to a destination. The faster this is done, the better for Netflix, and more importantly, for consumers who will engage with the Netflix world instead of being subscribers who share passwords.

The author is an Assistant Professor of Marketing at the Indian Institute of Management Kozhikode. Her areas of focus include consumer psychology and digital marketing.