Trade unions called Monday for the European Commission to impose maximum temperature limits for outdoor workers, after three people died while on shift in Madrid during last week's withering heatwave 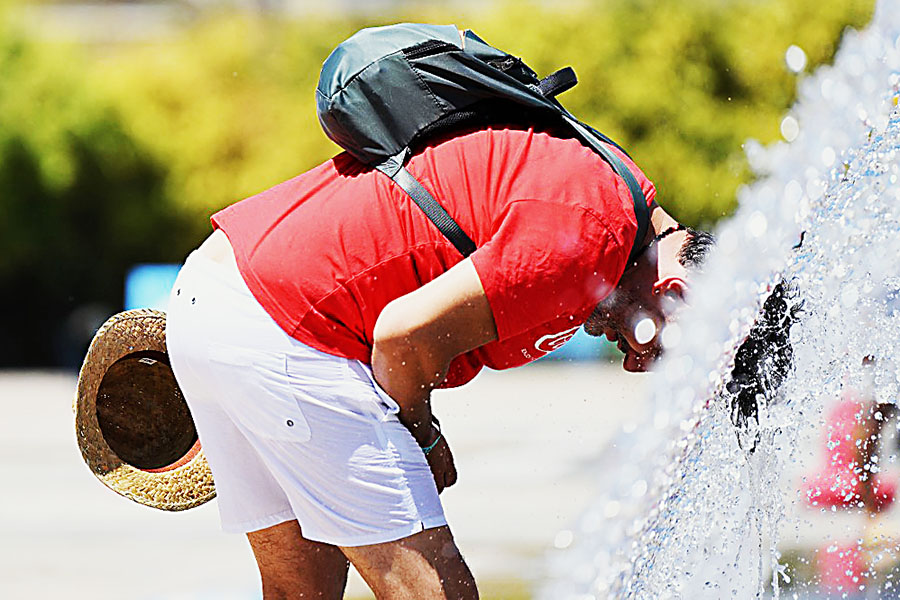 A man refreshes himself at Cinecitta World Park, near Rome on July 23, 2022, during an ongoing heat wave across Europe. Image: Tiziana Fabi / AFP

Paris, France: Trade unions called Monday for the European Commission to impose maximum temperature limits for outdoor workers, after three people died while on shift in Madrid during last week's withering heatwave.
While a handful of member states have legislation limiting working hours in excessive heat, the thresholds vary and many nations have no nationwide heat limits.
According to research by the polling agency Eurofound, 23 percent of all workers across the EU were being exposed to high temperatures a quarter of the time. That figure rises to 36 percent in agriculture and industry and to 38 percent for construction workers.
Previous research has linked high temperatures to a number of chronic conditions and an elevated risk of workplace injury.
"Workers are on the frontline of the climate crisis every day and they need protections to match the ever-increasing danger from extreme temperatures," said Claes-Mikael Stahl, deputy secretary general of the European Trade Union Confederation.

The ETUC said that most EU nations have no maximum temperature legislation for workplaces, although Belgium, Hungary and Latvia all have some curbs on activity.
In France, where there are currently no working temperature limits, 12 workers died due to heat exposure in 2020 alone, the union said.

Spain, where three workers died in extreme heat last week, does have temperature limits in place, but only for certain professions.
A 60-year-old street cleaner on a one-month contract died in Madrid on Saturday, after he collapsed in the street from heatstroke while working the previous day.
At the time temperatures in Madrid neared 40C.
A 56-year-old warehouse worker in a Madrid suburb also died on Saturday after suffering heatstroke while on the job.
Security forces on Thursday announced the death of a worker due to heat in Paracuellos de Jarama, on the outskirts of the capital.
Also read: Heatwaves: A vicious climate change circle
Last week, the city reached a deal with unions to restrict manual street cleaning work to below 39C.
With global average temperatures more than 1.1C warmer than the pre-Industrial era, Europe is being hit with more and more record-breaking hot spells.
Global heating will continue to make deadly heatwaves more frequent and intense with ever higher levels of atmospheric carbon pollution, scientists say.
The UN's climate science panel this year warned that tens of millions more people would be subjected to extreme heat days under 2C of warming; countries' climate plans have Earth on course to warm by 2.7C.
"Heatwaves can be fatal for people working unprotected from the sun, as we've already witnessed in Spain this summer," said Stahl.
"Workers are on the frontline of the climate crisis every day and they need protections to match the ever-increasing danger from extreme temperatures."
Also read: The anatomy of a heatwave
He said the EU needed continent-wide legislation on maximum working temperatures, since "the weather doesn't respect national borders".
"Politicians can't continue to ignore the danger to our most vulnerable workers from the comfort of their airconditioned offices," he said.
By Patrick GALEY
© Agence France-Presse

Tweets by @forbesindia
From war to peace: Vietnam's rubber sandals march on
Infosys reports the highest Q1 growth in over 10 years, and the lowest margins this century