At least 34 locations in Britain beat the previous record of 38.7 degrees Celsius set in Cambridge, eastern England, in 2019 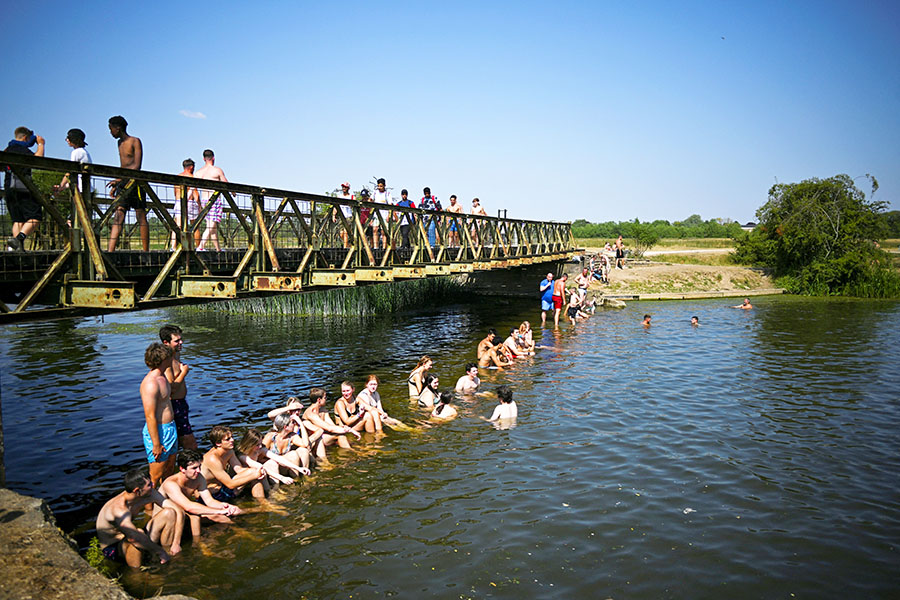 Bathers cool down in the River Thames, during a heatwave, in Oxford, Britain, July 19, 2022. Image: Dylan Martinez / Reuters

London, United Kingdom: A punishing heatwave fuelling ferocious wildfires in western Europe pushed temperatures in Britain over 40 degrees Celsius (104 degrees Fahrenheit) for the first time on Tuesday and regional heat records tumbled elsewhere.
Grassland fires erupted on the edge of London, with one forcing the evacuation of 14 people as farm buildings, houses and garages were consumed by the flames.
"I was sunbathing in my garden and then a massive black cloud came across," said Ciar Meadows, a 30-year-old housewife who had to leave her home in the town of Wennington.
"Within an hour it spreads all the way to our house... All of our cars have gone."
After the UK's warmest night on record, the Met Office said a new high of 40.3C had been recorded at Coningsby in eastern England.

At least 34 locations in Britain beat the previous record of 38.7C set in Cambridge, eastern England, in 2019.
Experts blamed climate change for the soaring temperatures—and warned that worse is yet to come.
Heatwaves "are becoming more frequent and this negative trend will continue... at least until the 2060s, independent of our success in climate mitigation efforts," UN World Meteorological Organization chief Petteri Taalas told reporters in Geneva.
"In the future these kinds of heatwaves are going to be normal, and we will see even stronger extremes."

The high temperatures have triggered an unprecedented red alert in much of England, where some rail lines were closed as a precaution and schools shuttered in some areas.
All trains were cancelled from London's usually busy Kings Cross station, leaving many travellers stranded.
"It's a little frustrating," said US tourist Deborah Byrne, trying to reach Scotland.
But with road surfaces and runways melting and fears of rails buckling, Transport Secretary Grant Shapps conceded much of Britain's infrastructure "is just not built for this temperature".
In France, 64 different areas registered record high temperatures on Monday, the national weather service confirmed, most of them along the western Atlantic coast where temperatures also soared above 40C.
But the all-time high for mainland France, set in 2019 near Montpellier, of 46C did not appear under threat this week.
The heatwave—the second to engulf parts of Europe in recent weeks—has contributed to deadly wildfires in France, Greece, Portugal and Spain, destroying vast tracts of land.
Firefighters in France's southwest were still struggling to contain two massive fires that have caused widespread destruction and forced tens of thousands of people to leave their homes.
"The firemen rang the doorbell to tell us we had to evacuate right away," a pensioner told AFP in La Teste-de-Buch, as he left with his partner and pets in a car.
Nearly 1,700 firefighters from all over the country are battling the two blazes that have so far burned more than 19,000 hectares (42,000 acres) of forest near the Dune du Pilat, Europe's biggest sand dune.
"It's heartbreaking," said Patrick Davet, mayor of La Teste-de-Buch.
"Economically, it's going to be very difficult... because we are a tourist town."
Smoke from the fire-hit region of Gironde late Tuesday reached Paris almost 700 kilometres (400 miles) away, an air quality monitor said.
President Emmanuel Macron was to visit Wednesday, the presidency said.

Greek authorities evacuated eight villages north of Athens, reporting 39 fire outbreaks across the country in just 24 hours.
In Spain—nearly 10 days into the latest heatwave—more than a dozen fires continued to rage Tuesday, including in the northwest province of Zamora, which already experienced a huge fire last month.
Known as one of the largest wolf reserves in Europe, it saw nearly 30,000 hectares of land reduced to ashes during the June blaze.
Nearly 6,000 people had to be evacuated from there this week after flames destroyed several thousand hectares of meadows and forests, regional authorities said.
"The climate emergency is lethal," said Prime Minister Pedro Sanchez, after visiting a badly hit area.
Rail traffic between Madrid and Galicia, in the northwest, remained suspended after fires on either side of the tracks.
Several people have died in recent days due to the blazes while separately, an office worker in his 50s died from heatstroke in Madrid.
In Portugal, nearly 2,000 firefighters were tackling fires in the centre and north of the country.
A forest fire in the Vila Real region in the far north of Portugal caused three villages to be evacuated.
Murca mayor Mario Artur Lopes said the fire, which began on Sunday, had devastated between 10,000 and 12,000 hectares of forest.
Wildfires in Portugal had already killed two other people and injured around 60.

Elsewhere, the Netherlands recorded its third-highest temperature since records began—
39.4C in the southern city of Maastricht, public broadcaster NOA said, quoting the national meteorological office.
Dutch authorities spread roads with salt in some areas to prevent the asphalt from melting and being damaged by the weight of vehicles.
In Amsterdam, council workers sprayed bridges over the famed canals with water to keep them cool, amid fears that steel in the structures could expand and prevent them opening to let boats pass.
Car parks at the beach in Scheveningen, near The Hague, were full by midday, and hundreds of beachgoers sheltered under the pier to escape the sun.
"It's just like a holiday in Majorca," said Norwegian tourist Ane Herber, 25.
In neighbouring Belgium, big state-run museums, primarily in Brussels, took the unusual step of offering free access Tuesday to over-65s to help them stay cool.
Two nuclear reactors located near Antwerp had to reduce their production power by more than half in order to limit the temperature of water discharged into nearby rivers.
In Germany, the hot summer so far has raised fears of drought, with the German Farmers' Association president warning of "major losses" in food production.
Henning Christ, who grows wheat and other crops in Brandenburg state, told AFP his farm was 20 percent below its average annual yield.
"We've had almost no rain for months, coupled with high temperatures," he said.
"We have become used to drought and dry periods to some extent, but this year has been very unusual."
By Joe JACKSON with AFP Europe bureaus
© Agence France-Presse