The latest government figures show more than 4,000 teachers left their jobs in the past school year, a five-year high and a 70 percent spike from the year before 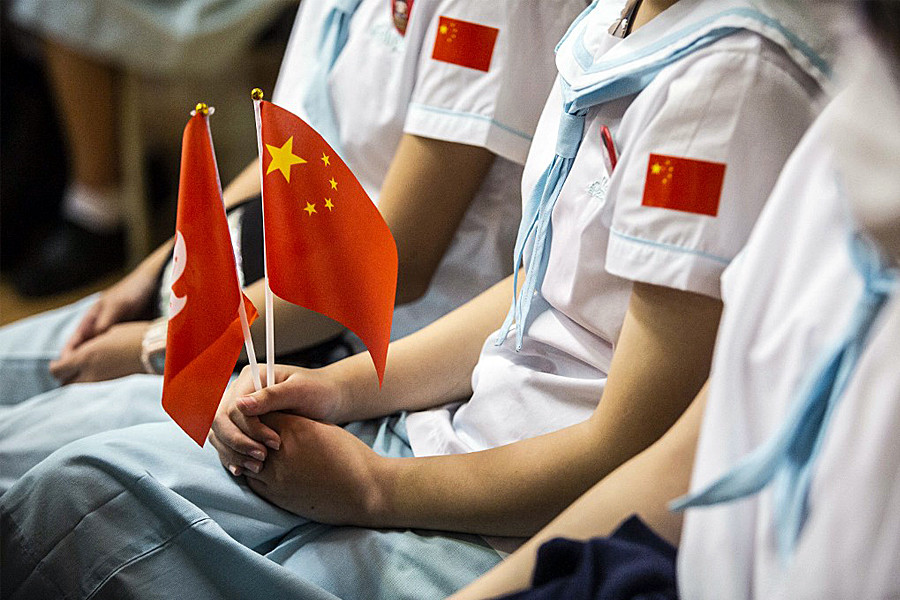 In this file photo taken on October 1, 2021, a student holds a Chinese and Hong Kong flag during a flag-raising ceremony to mark China's National Day at a school in the Tung Chung district of Hong Kong. Image: ISAAC LAWRENCE / AFP

Hong Kong, China: As Hong Kong students return for the new academic year, veteran teacher Wong is counting down the days until the political maelstrom sweeping the city leaves him no choice but to quit.
Wong, 34, fears he will soon join the exodus of teachers and students triggered by Beijing's tightening grip on Hong Kong, which has started transforming local schools, according to multiple educators.

The latest government figures show more than 4,000 teachers left their jobs in the past school year, a five-year high and a 70 percent spike from the year before.
"I have no faith in the future of Hong Kong or that of the industry. It is hard to nurture a person in this environment," Wong, who asked to use just his surname, told AFP.
The political crackdown has coincided with the coronavirus pandemic, during which Hong Kong has kept strict zero-Covid rules that have fuelled further departures.
Students have pulled out of school in droves, with 30,000 fewer attending primary and secondary school in September 2021 compared to the preceding October.
Wong, who has taught for more than a decade, said five teenagers from his class of 32 withdrew halfway through a term to emigrate.
"The students are leaving not because they dislike the school, but because of Hong Kong's environment."

China is remoulding once outspoken Hong Kong in its own authoritarian image, following massive and sometimes violent democracy protests in 2019 in which youngsters played a key part.
Teachers have since been ordered to instil patriotism in students and comply with a Beijing-imposed national security law that has criminalised much dissent.
Curriculums are being tweaked to align more closely with Chinese Communist Party ideology.
Earlier this month teachers were told to "study and learn the key messages" of a recent speech by President Xi Jinping.
Students and parents have also been encouraged to report teachers who might be breaching the security law.
Wong received a letter of reprimand from Hong Kong's Education Bureau last year after his teaching materials analysing the pros and cons of civil disobedience drew anonymous complaints.
"It shattered the trust that was fundamental to teaching," he recalled.
Between 2019 and 2021, Hong Kong authorities received 344 complaints against teachers in relation to the democracy protests, with 55 percent of cases found to be substantiated.
One high-school principal told AFP he would instruct staff to keep their heads down and comply with government guidelines to the letter.
"Everyone is being very careful... If some (teaching materials) may touch on political sensitivities, then we'll skirt around it," said the principal, who requested anonymity.
"Nobody wants trouble and the teachers don't want to be held personally responsible."

Authorities have rejected the idea of an emigration wave and argue teachers choose to leave their posts for various reasons, including retirement and further study.
Hong Kong's education chief said schools were generally operating smoothly and there were enough qualified teachers despite a "slightly higher" attrition rate.
But a recent survey of 140 schools showed each institution on average lost 32 students and seven teachers over the past year.
Newspaper Ming Pao surveyed its classified section and found at least 200 schools were still looking for teachers in late July. In previous years most vacancies would be filled by the end of May.
Administrators say some schools have been forced to hire less-qualified candidates.
Schools are also competing to poach students, as their headcount often determines their government subsidies and protects against closure.
And education is not the only sector affected by brain drain.
Also read: Byju Innovation Labs: Bridging the teacher-student gap with AI, ML
The city's labour force has dropped about six percent since 2018 to 3.75 million people, according to the latest official figures, the lowest number in nearly a decade.
A new generation of Hong Kong teachers are now weighing options and assessing risks that come with their careers.
University graduate Mak, 23, has spent a year teaching English at a secondary school even though he does not have a teacher's diploma —a fact his employer did not seem to mind.
"I'll continue teaching for the next few years, but not necessarily in the long term," he said.
Mak feels he has little control over what happens to his profession.
"There's not much that can be changed," he sighed. "You either submit, or quit."
By Su Xinqi and Holmes Chan
© Agence France-Presse