Eight years ago, two Chinese anthropologists set up a Hong Kong team to encourage integration in a city which, despite its status as an international hub, can be less than inclusive, especially when it comes to non-white and non-Chinese residents. Now the sport has spread across schools 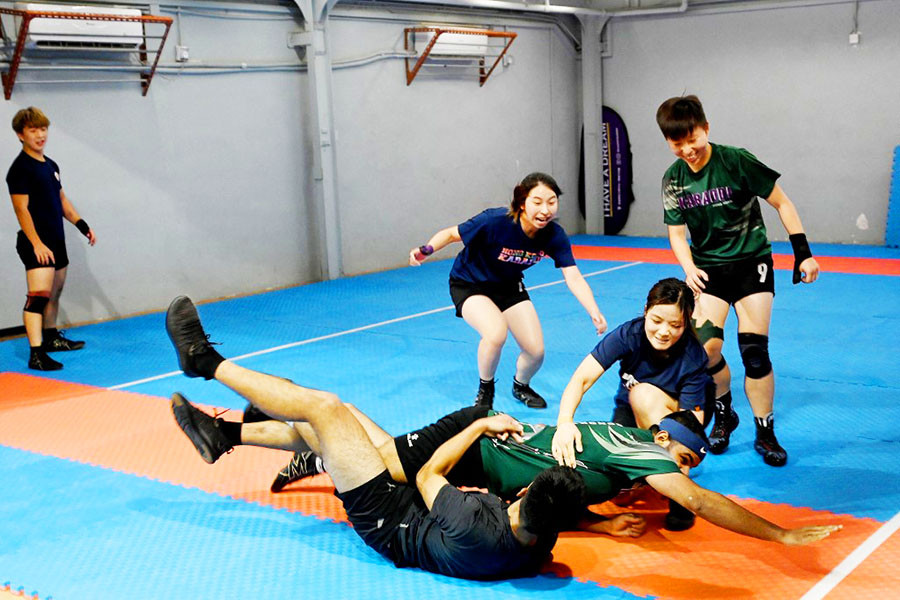 This picture taken on May 23, 2022 shows participants playing kabaddi, a tag-wrestling sport popular in South Asia which involves players trying to tag an opponent on the rival's side before making it back to their own half, in Hong Kong. Overlooked by high-rises on the outskirts of Hong Kong, a group of students practise body-slam tackles and vicious ankle-wrenches at weekly training for an unlikely sport: the ancient Indian game of kabaddi. Image: Peter PARKS / AFP

Hong Kong, China: Overlooked by high-rises on the outskirts of Hong Kong, a group of students practise body-slam tackles and vicious ankle-wrenches at weekly training for an unlikely sport: the ancient Indian game of kabaddi.
Though its professional league has a huge following in India and surrounding nations, kabaddi—a highly physical game where the object is to tag the rival team, often by brute force—is relatively unknown outside the region.
But eight years ago two Chinese anthropologists set up a Hong Kong team to encourage integration in a city which, despite its status as an international hub, can be less than inclusive, especially when it comes to non-white and non-Chinese residents.

"We often hear Hong Kong is Asia's world city but we really don't have much chance to interact with people from different cultural backgrounds," Wyman Tang, one of the anthropologists, told AFP.
"We live in the same neighbourhood, but it's like we are living in a parallel world."
Their project—Kabaddi United Hong Kong (KUHK)—began as a one-off workshop at a local university. It has now spread to nearly 80 schools and social organisations and has had more than 8,000 participants.
Royal Sunar, a coach at KUHK, was shocked to find the game of his childhood being taught in Hong Kong.
"Kabaddi was one of my interests," said the Hong Kong-born Nepali.
"Somehow local Chinese people also like the sport."

Kabaddi is said to date back 5,000 years with roots in Indian mythology, although similar versions of the game have appeared throughout Asia over the centuries, including in Iran, which also claims to be its birthplace.
Teams collect points by sending a "raider" to the rival side, who tries to quickly tag an opponent and then run back to their own half.
Defending teams try to prevent the raider escaping, which often involves full-team pile-ons.
Nepali immigrant Rojit Sharma joined KUHK in 2019.
For him, kabaddi offered a gateway to making Chinese friends for the first time, and to practise Cantonese.
"(There is) an emotional connection in kabaddi because we hold hands and then we know more about each other," he said.
But the 22-year-old said that off the pitch, ethnic minorities in Hong Kong have to fight to be recognised as "local".
He is no stranger to blatant discrimination.
"When I arrived in Hong Kong, whenever I would travel on public buses or public transport, and when I'd try to sit down, the person next to the seat would just move away," he told AFP.

Advocacy groups say his experience is the norm.
"I think there are significant issues in Hong Kong related to race," said Shalini Mahtani, the CEO of one such group, the Zubin Foundation.
She said South Asians face daily discrimination in Hong Kong, giving examples of people being told their skin is too dark at job interviews or being blocked from renting apartments.
"They are the wrong colour in a place that is very colour sensitive," she added.
The coronavirus pandemic has deepened discrimination.
When an area of the city home to many South Asians was one of the first to go into lockdown, a senior health official sparked anger by suggesting ethnic minority residents might be spreading the virus because "they like to share food, smoke, drink alcohol and chat together".
Critics pointed out that the same could easily be said of Cantonese culture—or the many raucous bars filled with white-collar "expat" foreign workers.
Mahtani partly blames the issue on the education system.
"The truth is many Hong Kong Chinese will never have had the experience of engaging with ethnic minorities," she said.

That was true for Christy Tai, a final-year university student, until she joined her kabaddi group after trying it out and liking its "team spirit".
She said sport is a good way to get over language barriers.
"We need to talk to each member in the team... When we talk, we cannot only talk about a sport, but we talk about our life, our habits, or whatever," she said.
Hong Kong still has a long way to go to begin a professional kabaddi league, but founder Tang is pleased how much the game has caught on in the city.
"As long as you follow the same sets of rules, then you can enjoy the game," Tang said.
By Ayaka MCGILL
© Agence France-Presse