Twenty-five years after Britain's handover of Hong Kong to Chinese rule, there are no opposition lawmakers left in Hong Kong's legislature. Many have been arrested under a national security law Beijing imposed in 2020 or disqualified from standing for office under new "patriots only" electoral rules 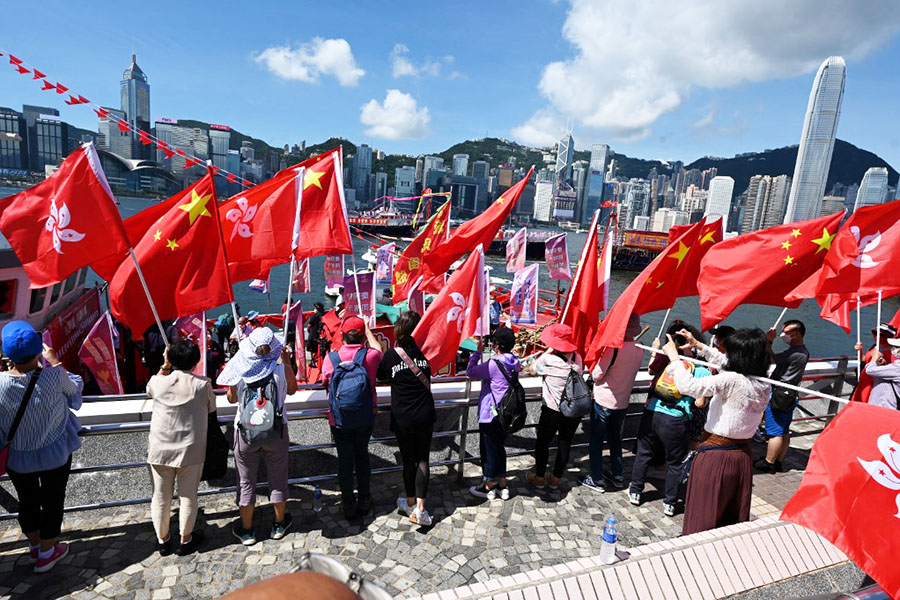 People wave Chinese and Hong Kong flags as fishing boats with banners and flags to mark the 25th anniversary of the Handover of Hong Kong from Britain to China sail through Hong Kong’s Victoria harbour on June 28, 2022. Image: Peter Parks / AFP

Hong Kong, China: As midnight struck on June 30, 1997 and Hong Kong transitioned from British to Chinese rule, pro-democracy lawmaker Lee Wing-tat stood with colleagues on the balcony of the city's legislature, holding a defiant protest.
Hong Kong will mark the 25th anniversary of the handover on Friday and the halfway point of One Country, Two Systems—the governance model agreed by Britain and China under which the city would keep some autonomy and freedoms.
That model was set to last 50 years. But even in its first hours, battle lines that would define Hong Kong's politics for the next two decades were drawn.
Furious at outgoing British governor Chris Patten's last-gasp attempts at democratisation, China had announced that any legislator who had openly supported the measures would be thrown out.

So the minute the handover became effective, Lee and many of his colleagues became seatless, but remained within the legislature to protest their expulsion.
Other opposition figures went to the handover ceremony to show goodwill, but returned to join the rally later.
"This is a moment when all Chinese people should feel proud," Martin Lee, founder of Hong Kong's Democratic Party, said in a speech at the time. "We hope Hong Kong and China can progress together."
Lee Wing-tat had more mixed feelings.
"We were no longer that optimistic and I no longer believed we would have full-fledged democracy," he told AFP.
Twenty-five years later, there are no opposition lawmakers left in Hong Kong's legislature at all.
Many have been arrested under a national security law Beijing imposed in 2020 or disqualified from standing for office under new "patriots only" electoral rules.
Others have fled—including Lee Wing-tat, who now lives in Britain.

Like many, Lee had been hopeful in 1984, when the Sino-British Joint Declaration laid the path to ending more than 150 years of British colonial rule.
One Country, Two Systems promised a high degree of autonomy, independent judicial power, and that the city's leader would be appointed by Beijing on the basis of local elections or consultations.
"Deng (Xiaoping, China's then leader) back then said a lot about things like 'Hong Kong people administering Hong Kong', which was rather compelling," Lee said.
But China's deadly 1989 Tiananmen crackdown, which saw Beijing send in tanks to crush a democracy movement, shattered his faith in the ruling Communist Party (CCP).
In the years after the handover, mistrust between Beijing and Hong Kongers like Lee only escalated.
The pro-democracy camp saw Beijing as ruthless authoritarians set on denying Hong Kongers their promised rights. And the CCP increasingly saw their demands as a challenge to China's sovereignty.
There were successful mass protests in 2003 and 2012 that led to government climbdowns.
But campaigns to let Hong Kong pick its own leaders, including the 2014 Umbrella Movement, came to nothing.
Tensions finally exploded in the huge, sometimes violent protests of 2019, which China responded to with a comprehensive crackdown that has transformed the once outspoken city.

Critics like Patten, the last British governor, accuse the CCP of betraying its promises to Hong Kong.
"China has ripped up the joint declaration and is vengefully and comprehensively trying to remove the freedoms of Hong Kong because it regards them as a threat, not to the security of China but to the ability of the Chinese Communist Party to hang on to power," Patten told AFP last week.
But former Hong Kong leader Leung Chun-ying said the crackdown over the last three years was "not overkill".
"You can't say, 'We want to have a high degree of autonomy and you stand aside'—that will be de facto independence of Hong Kong," he told AFP.
Leung, whose administration faced down the Umbrella Movement, blamed years of social and political unrest on people being misled by political figures and misunderstanding Hong Kong's mini-constitution.
He also suggested hostile "external forces" were involved, but declined to be specific.
Echoing Beijing, Leung described One Country, Two Systems as a success and said the arrangement might continue beyond its 50-year term, calling July 1, 2047 "a non-event".

Many Hong Kongers remain unconvinced.
Public confidence in One Country, Two Systems hit a historic low in mid-2020, according to polls carried out by the Hong Kong Public Opinion Research Institute since 1994.
Some, like Herman Yiu, a young politician born in the year of the handover, have lost all hope of ever being able to make change within the system.
"Being born in 1997... it felt like my fate was connected to Hong Kong's fate," Yiu told AFP. "I wanted to participate to make Hong Kong better."
As a fresh graduate, Yiu was part of a pro-democracy landslide at one-person-one-vote district council elections in 2019.
His career was short-lived, though—in June he became one of the many politicians disqualified from office.
"I think now the emphasis of One Country, Two Systems is on 'one country'," Yiu said.
"I feel helpless, for Hong Kong and myself."
By Su Xinqi
© Agence France-Presse