Some viewers have a visceral reaction to juxtaposing the idea of "Vogue" — with its historic connections to elitism, fantasy, wealth and frivolity — and the reality of war. It looks, they say, tasteless. Especially given some of the magazine's missteps in the past 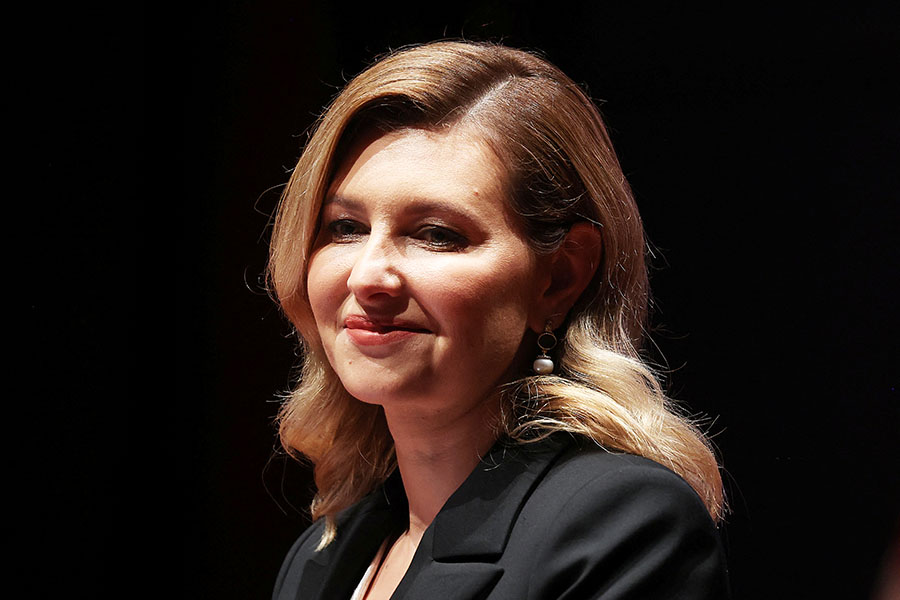 After the hoo-ha over the magazine not giving Melania Trump a cover (even though Michelle Obama got three) and the to-do over Kamala Harris’ “relaxed” portrait being chosen over her more formal cover try, comes a new controversy, related to a “digital cover” released online featuring Olena Zelenska, the Ukrainian first lady. Image: Michael Reynolds/Pool via REUTERS​

Another season, another Vogue story on a politician causing a kerfuffle. After the hoo-ha over the magazine not giving Melania Trump a cover (even though Michelle Obama got three) and the to-do over Kamala Harris’ “relaxed” portrait being chosen over her more formal cover try, comes a new controversy, related to a “digital cover” released online featuring Olena Zelenska, the Ukrainian first lady.
Titled “Portrait of Bravery,” the article is a collaboration between the Condé Nast Vogues (pretty much all of them) and Ukrainian Vogue (a licensed magazine owned by Media Group Ukraine).
It has moody, graceful portraits of Zelenska by Annie Leibovitz: sitting on the marble steps of the presidential palace, staring grimly ahead; holding hands with her husband, President Volodymyr Zelenskyy; and standing next to female soldiers at Antonov Airport, clutching the lapels of a long navy overcoat. The photos are accompanied by a lengthy interview and some BTS video footage of the first couple and Leibovitz. It will appear in print later this year.
Unlike Zelenska’s first Ukrainian Vogue cover, which appeared in November 2019 not long after Zelenskyy was elected, and which showed the first lady romping with her family and styled in Celine, Prada, Lemaire and Jimmy Choo, the new feature eschews fashion credits.

Zelenska appears polished, but the story focuses on the pain and trauma of her country and its people, as well as the couple’s relationship. None of the subjects are smiling.
A single line under one photograph notes that Zelenska is wearing entirely Ukrainian designers and lists their names. This may seem like a small thing to most viewers, but it takes the commercial element out of the shoot. Whatever it’s selling — and it’s definitely selling something — it isn’t clothes.
Nevertheless (and unsurprisingly), the article has provoked something of a backlash. Some viewers have a visceral reaction to juxtaposing the idea of “Vogue” — with its historic connections to elitism, fantasy, wealth and frivolity — and the reality of war. It looks, they say, tasteless. Especially given some of the magazine’s missteps in the past.
For example, there was an embarrassingly fawning profile of the Syrian first lady, Asma Assad, published in 2011 just around the time Assad’s husband, Bashar Assad, was revealed to be a bloody dictator. (The piece, which made the magazine seem morally compromised in the face of fanciness, was later removed from Vogue’s website, though it still casts a shadow on Vogue’s coverage, especially when it comes to political figures.)
“While Ukraine is going through hell, Vogue is doing a photoshoot for the President & his wife,” wrote Amrita Bhinder on Twitter.
Rep. Mayra Flores, R-Texas, seized the opportunity to attack the Biden administration for its financial support of Ukraine, implying it was funding vanity. Breitbart wrote a gleeful article aggregating the criticism, especially as it related to government funding.
Still, other readers have come to the defense of Zelenska, seeing the shoot as a symbol of national pride: a means to show the world Ukrainian elegance; a reminder of the balm that can be found in beauty; and a subtle nod to shared humanity in the face of inhuman aggression. She is not, after all, in a ballgown eating cake. She is in a war zone, looking haunted.
To a certain extent, the debate simply shows how tangled our feelings about fashion still are and how entrenched the view of it as a nonserious subject remains — despite the fact that fashion is a key part of pop culture and the rare equivalent of a global language. It’s one that every politician, and public figure, employs to their own ends, whether they want to admit it or not. (That’s why, despite the risks, they keep appearing in magazines like Vogue.)
The Russian-Ukrainian conflict is a war being conducted on all fronts: on the ground, in the air, in the digital sphere and in the arena of public opinion. (See, for example, Zelenska’s appearance in Washington last week.) Vogue — and, indeed, any outlet that allows the Ukrainian people to reach different swathes of the global population and influence sentiment — is one of them. As Zelenska and her husband, who founded one of the biggest television entertainment production companies in Ukraine before getting into politics, know.
By putting Zelenska on its cover, Vogue is furthering her role as the relatable face, and voice, of the struggle; bringing her up close and personal for the watching world. And by appearing in public, and raising issues in public, when her husband cannot, she is keeping her country’s needs alive in the international conversation at a time when other crises are vying for attention. She has, essentially, weaponized Vogue.
She said as much to the BBC when one of its interviewers asked her to explain the choice: “Millions read Vogue, and to be able to speak to them direct, that was my duty,” she said, adding, “I believe it is more important to do something and be criticized for it than to do nothing.”
Whatever you think of the actual piece, however you feel about the magazine in which it was published, you can’t dispute the fact that it once again put the war in Ukraine in the headlines — and in the minds of people who may not have been following it as closely as others. In that context, her interview is not just an interview. It’s a piece of battle strategy.