Harry Styles: Icon of a generation free from stereotypes 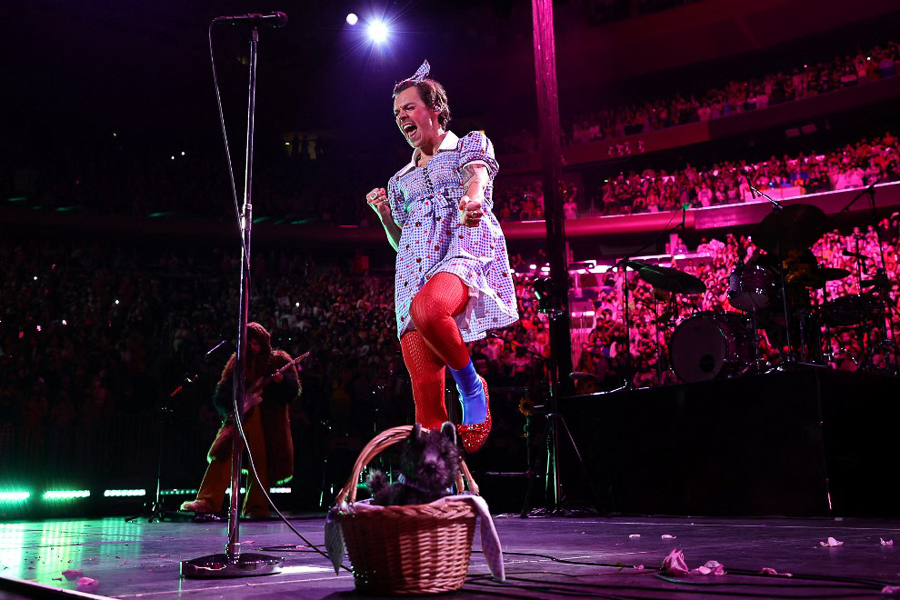 He may not describe himself as a style icon, but Harry Styles can pride himself on having massively contributed, in the space of just one year, to the mainstreaming of fashion that is more fluid and non-gendered, unwittingly becoming the standard bearer of a generation that wants to put an end to stereotyping. The British actor and singer went even further in this direction this week with the launch of his brand of clean, vegan cosmetics, a line where all products are aimed at all genders.

For several years now, Harry Styles has been cultivating an androgynous look, a style that he has fun with at  red-carpet noutings, gala social events, and concerts. But it was just a year ago, at the end of 2020, that the global star definitively defied fashion conventions that emphasized the duality of men and women with the former nearly always appearing in dark colors—and definitely not in pink—and cuts and garments tailored to portray a singular, muscular representation of masculinity. However, on the cover of the fashion bible Vogue, the former member of boy band One Direction posed in a Gucci dress. It marked the first time that a man was featured on the cover of the American edition of the legendary magazine, and moreover in an outfit that had heretofore been associated with the female gender. It was a statement-making move that would shake up gender conventions.

Doing away with stereotypes

As with any (r)evolution, this cover met with a mixed reception from the public, generating some criticism and insults and, inevitably, sparking debate. But Harry Styles has received a significant boost from Gen Z, a generation not shy about exerting its powerful influence, and who are more supportive in this regard than previous generations. It's a generation that is also highly determined when it comes to shattering anything remotely resembling a stereotype. "In terms of marketing targets, Generation Z doesn't fit neatly into the boxes, if only because it can't stand the stereotypes that are the legacy of older generations. For example, they are totally averse to the notion of gender," explained Eric Briones, editorial director of the Journal du Luxe, last March.

There is no doubt that the British singer has not only understood the messages this generation wants to send—messages that brands are struggling to decipher—but that he has above all chosen to embrace it. A prominent muse for the house of Gucci, Harry Styles has not stopped working this gender fluid fashion style throughout the year, all done without intention of being shocking or provocative, rather just with the desire to express his unique vision and his personality, through those most visible vectors of fashion and beauty.

And, as proof that the British star isn't mistaken in his stance, his desire to let his true fashion colors show, his fame has continued to grow over the last few months, making him one of the most influential celebrities in the fashion world. Last March, Harry Styles chose a boa to jazz up his on-stage outfit for the Grammy Awards in Los Angeles, creating an unprecedented—or nearly unprecedented—buzz for an accessory previously considered primarily feminine. Global fashion search platform Lyst observed a 1,500% jump in searches for feather boas no less than two days after the British singer's appearance at the music event.

His highly personal style, essentially based on a concept that has taken center stage in 2021, that of self-expression, also earned him a place at the top of The Year in Fashion ranking, also put together by the Lyst platform, a few months earlier. The ranking gave him the title of best-dressed celebrity of the year, a reward for the numerous search spikes generated by the outfits worn in his videos, or during his public outings.

And this week, the singer has once again caused a sensation, this time on the cover of DAZED, where he appears posing in lilac-colored flared pants and a cut-out top, in an exaggerated way, on a motorcycle. Inside the magazine, in the feature article dedicated to him, he also appears in a green sweater dress and polka dot tights, a semi-transparent jumpsuit, and oversize quilted coat. A photo shoot that confirms the star's desire to push back against stereotypes and diktats that have been bending to the point of breaking for months under the weight of a generation that is freer than any one that came before. It's funny because I don't think of myself that way (as a style icon)... but bringing people together is the thing I'm most proud of," Harry Styles told the fashion magazine. Cheers to that!

Harry Styles doesn't intend to slow down any time soon, on the contrary, as he moves seamlessly between the roles of influencer to musical artist and beauty line creator. The rumors that were circulating this summer were right. The star this week presented Pleasing, his first line, which takes the form of a brand of clean, vegan cosmetics for everyone. From the colors chosen for the website to the campaign shots to the product themselves, everything has been thought out with inclusiveness top of mind. Nail polish, serum, eye gel and lip oil, the first cosmetics proposed by the brand, are aimed at consumers of all genders, the goal being for everyone to find... their pleasure.

It marks one more step towards a desire to help make society more inclusive, one which brings people together more than it divides, and of which beauty and fashion are reflective symbols. Beyond the notion of gender, it's about putting an end to a single representation of femininity or masculinity and offering all individuals the space they deserve to express themselves.