Sparkles, lingerie, disco: Fashion gets back into party mode

The Italian runways brought an explosion of colour, and especially sparkle and shine, with disco-inspired outfits laced with lashings of sensuality, marked by the return of visible lingerie 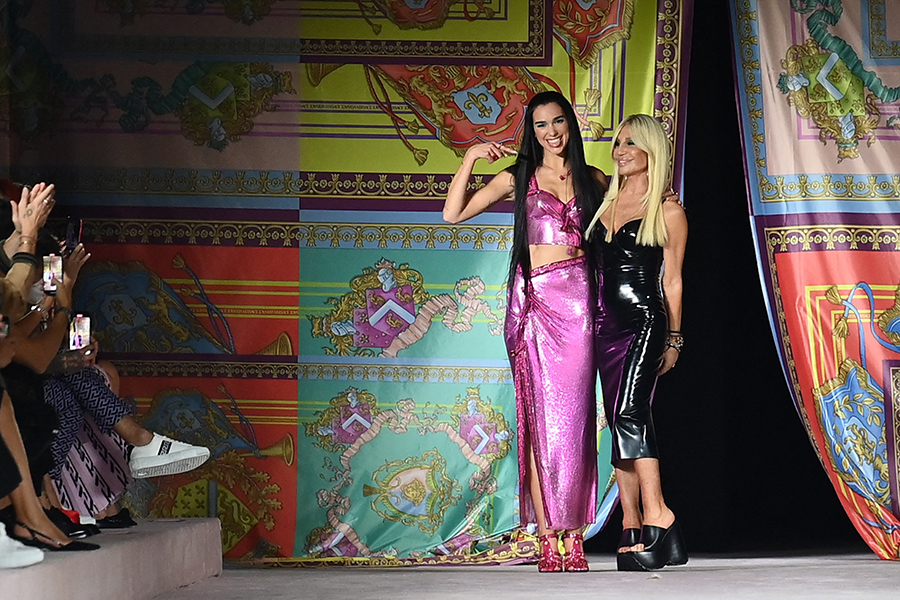 Sparkle and shine was everywhere in Milan, as seen here on the Versace runway.
Image: Marco Bertorello / AFP

The optimism and spontaneity of Fashion Weeks in New York and London was followed by the festive spirit of Milan. The Italian runways brought an explosion of color, and especially sparkle and shine, with disco-inspired outfits laced with lashings of sensuality, marked by the return of visible lingerie. While the pandemic may not yet be over, it seems that fashion is keen to turn the page (for good).

After the rain comes the sunshine. In Milan, designers seemed to be on a mission to draw a line under the recent difficult period and look to more optimistic, joyful and lively times. And that's something that's sure to be reflected in spring-summer 2022 womenswear wardrobes, with festive, colorful, bright, often short-cut pieces, and with the bra making an appearance as the guest star of the season, or almost.

Lingerie inside and out

Sensuality will be on the cards next summer, when visible lingerie returns as a fashion trend. Although rarely seen in New York and London, bras were on display under jackets, coats, blazers, and with pantsuits or streetwear-inspired jeans, expressing a certain sensuality in Milan. In some way, it's a surprising trend, since the pandemic and its various lockdowns undermined this womenswear staple, to the point that many women stopped wearing it altogether, embracing the "braless" movement that's been gaining ground for several months. Fendi, Etro, Alberta Ferretti and Roberto Cavalli all brought the bra to the forefront on the catwalks, just as many fashion houses showcased babydoll-style tops.

Subdued shades and neutrals are rarely present in summer wardrobes, but it's clear that fashion houses are on a mission to put vibrant, energetic shades in the spotlight for the upcoming spring/summer season. Yellow was already ubiquitous on the London catwalks, and this was also the case in Milan, as seen at Prada and Max Mara. Here, though, designers added sparkle and shine—and plenty of it—creating a certain festive spirit that was perhaps not so prevalent in London and New York. Indeed, the party came to the catwalk with a shower of crystals at the Fendi & Versace joint show, colorful effects and shimmering details at Alberta Ferretti, and multicolored sequins with fringing at N°21.

Back to work means back to suits for many women, but not in their pre-pandemic form. As seen in London, the suit is now landing in more fluid materials offering greater freedom and flexibility, but also in more loose-fitting cuts. In Milan, the oversized suit was everywhere, and most often seen in bright colors. This trend was seen at Emporio Armani, Fendi and Versace.

Tweets by @forbesindia
In full throttle: How 'kam peeta hai' propelled Suzuki Access 125 to number 2 in the pecking order
Network18 and Whisper host a first of its kind 'Telethon of Change' on the movement for menstruation education in India