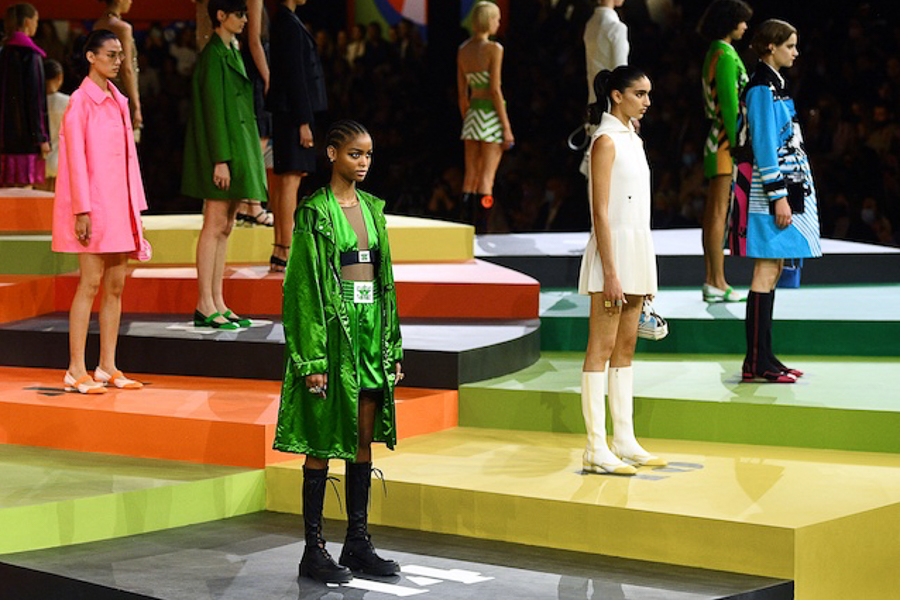 The coronavirus pandemic has triggered a radical change at one of France's oldest brands, with Dior tapping a 1960s vibe for a sporty, vividly colourful return to the Paris catwalk on Tuesday.

Dior's 2022 spring-summer women's collection reflected a world that had learned the value of the exercise and yearned for a bit of playful "joie-de-vivre" over the last 18 months.

Full of fluorescent greens and oranges, neon blues and big butterfly prints, it was a far cry from the subtle chic with which Dior is typically associated.

"There is a change in way we feel—we feel more vulnerable, and everyone reacts in their own way," designer Maria Grazia Chiuri told AFP ahead of the show.

"Some want to shut themselves away, others want to live to the full. For me, I want to live well every day," she said.

Sportswear was prominent, with looks based on jazzed-up boxing and judo outfits.

And there were lots of scuba-fabric rigid shapes echoing Dior's famous sports and ski looks of the 1960s.

"We understood the importance of sport during the pandemic, not just as a performance, but with the idea of feeling good. We were locked up, we had the need to maintain ourselves physically," said Chiuri.

It was a marked shift for the designer, with far fewer of the airy, floaty evening dresses that have been her trademark since joining Dior in 2016.

As the first woman to lead the brand, Chiuri has often sought to rework the iconic Dior Bar jacket, moving away from the ultra-feminised hourglass shape that defined the brand's early, postwar years.

It was entirely absent on Tuesday as she opted for boxier, less figure-hugging shapes.

"I wanted to show that there's more than just the Bar jacket," Chiuri told AFP.

The new collection came as a surprise to Dior's artisans.

"I like it a lot, it's a radical change. It's cool, it's youthful, it's optimistic," he added.

"We need that— the colours— to get away from the black and dark blue, to see prints that are almost a bit Brazilian."

There was a sense of release in the show itself, too, with no more social distancing and a relaxed attitude to masks among many of the spectators.

The stage was playful, too, with the models rotating around a huge circular, stepped platform like something out of a game show.

"People use fashion to express themselves, to play," said Chiuri.

"In the end, fashion is a big performance." ,

Tweets by @forbesindia
Kotler and Sarkar: On brand activism, and why credibility of Indian CEOs is at an all-time low
The Hair Revolution