Kyiv's nightlife is back after a prolonged silence

This is a city full of young people who have been cooped up for two years, first because of Covid and then the war with Russia. They yearn for contact 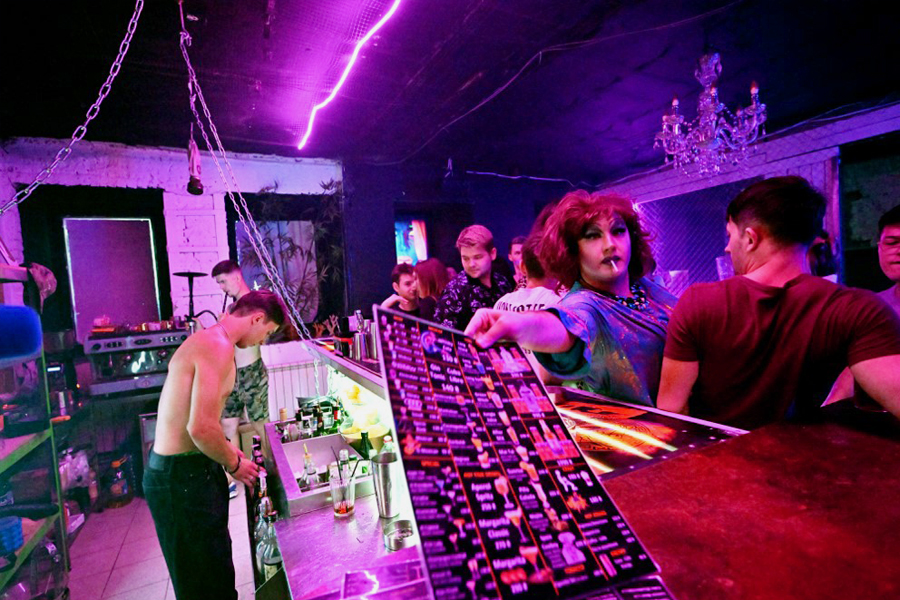 A file photo of revellers at a party in a nightclub in Kyiv, on June 25, 2022. Image: Sergei Supinsky / AFP

KYIV, Ukraine — The rave had been planned for weeks, with the space secured and the DJs, the drinks, the invites and the security all lined up.

But after a recent missile strike far from the front lines killed more than 25 people, including children, in central Ukraine, an attack that deeply unsettled all Ukraine, the rave organizers met to make a hard, last-minute decision. Should they postpone the party?

They decided: No way.

“That’s exactly what the Russians want,” said Dmytro Vasylkov, one of the organizers.

So they rigged up enormous speakers, blasted the air conditioning and covered the windows of a cavernous room with thick black curtains. Then, they flung open the doors to an old silk factory in Kyiv’s industrial quarter.

And as if on command, the room filled with young men with their shirts stripped off and young women in tight black dresses, everyone moving as if in a trance, facing forward, almost like at a church, the DJ the altar.

It was dark, sweaty, loud and wonderful. Here was a country locked in a war that touched every person in the room but still, they were dancing their hearts out.

“If you know how to use it, this is the cure,” said one raver, Oleksii Pidhoretskii, a young man who lives with his grandmother and hadn’t been out for months.

After a prolonged silence, Kyiv nightlife is roaring back.

Many people are venturing out for the first time since the war began. To drink by the river. To meet a friend. To sit at a bar and have a cocktail. Or three.

This is a city full of young people who have been cooped up for two years, first because of COVID and then the war with Russia. They yearn for contact. War makes that urge even greater, especially this war, where a Russian cruise missile can take you out, anywhere, anytime.

And now that summer is in full swing, and the heavy fighting is mostly concentrated in Ukraine’s east, hundreds of miles away, Kyiv is finally feeling a little less guilty about going out.

“This was a big question for me: Is it OK to work during the war? Is it OK to pour a cocktail during the war?” said Bohdan Chehorka, a bartender. “But the first shift was the answer. I could see it in the customers’ eyes. It was psychotherapy for them.”

Each passing weekend, in a city that already enjoyed a reputation for being cool, it gets easier to find a party. A hip-hop event the other night became a sea of bobbing heads. The party was held outdoors. For a spell, it started raining. But that didn’t matter. The party was on. On the dance floor, bodies were bumping.

Across town, people spilled out of sidewalk cafes. Inside the bars stood fewer empty stools than just a few weeks ago. Along the Dnieper River, which wends through Kyiv, hundreds of people sat on the walled banks, with friends, and often drinks, silhouetted by the amazingly long twilight and a silky blue sky, soaking up the wonders of a northern clime in the throes of a summer night.

But curfew hangs over this city like a hammer. The party may be on but so is the war.

At 11 p.m., by municipal decree, everyone has to be off the streets. Anyone caught violating this faces a fine or, for young men, a potentially heavier consequence: an order to report for military service. Working backward, that means bars close at 10, to allow workers to get home. Last call is at 9. So people get going early.

The rave in the old silk factory, for example, started at 2:30 in the afternoon.

Still, even at that odd hour, people at the rave said they succeeded, with the help of the pounding techno and some other aids, in forgetting about the war. They synced up with the bass vibrations, closed their eyes and were able to “dissolve,” and “escape,” they said. Momentarily.

The war is not just a looming shadow but a force that directs everyone’s life, dominates everyone’s thoughts, shades everyone’s moods, even if they’re trying really hard to do the things they enjoyed before.

Both the hip-hop party and the rave donated proceeds to the war effort or humanitarian causes, part of the reason the parties were held in the first place.

And in casual conversations, like one at Pink Freud, a bar, the war keeps coming up. Small talk between a young woman and Chehorka, the bartender, who also works as a psychotherapist, led to a conversation about hobbies that led to a discussion about books that led, inexorably, to the Russians.

Chehorka told the young woman that he was selling his large collection of Russian language books because he never wanted to read Russian again.

“This is my own war,” he explained.

He added that he felt the city’s whole psyche had changed. “Kyiv’s different now,” he said. “People are more polite, more friendly. They’re not drinking as hard.”

Now, when it hits 10, Kyiv radiates a nervous energy. People drinking on the street, or out by the river, check their watches. They cap the clear plastic bottles of cider they were swigging, get up and walk quickly.

Uber prices triple, if you can find one.

Some young people, seeing the impossibility of hailing a ride, say bye to their friends and duck their heads and start running home, desperate to beat curfew.

At the stroke of 11, Kyiv stops. Nothing moves. The sidewalks lie empty.

Tweets by @forbesindia
Russia cuts gas flow to Europe, intensifying fears it is weaponising fuel
Herbal tea, knitting and reading under a blanket: How Gen Zers are embracing their 'grandma era'