After Russia's invasion in February shuttered picture houses nationwide and production ground to a halt, the country's resilient film industry is making a tentative comeback 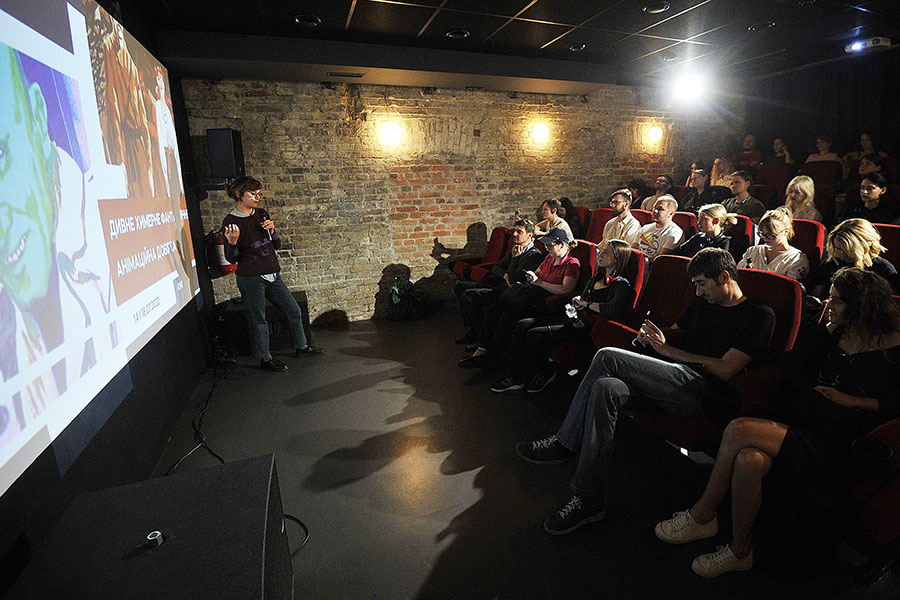 From the Hollywood blockbuster to the high-brow film noir, the silver screen offers a few hours' peace in a darkened refuge from the mundane grind of the nine to five.

But Ukraine's filmgoers have begun seeking literal shelter in subterranean screenings offering protection from the ever-present threat of missiles from above.

After Russia's invasion in February shuttered picture houses nationwide and production ground to a halt, the country's resilient film industry is making a tentative comeback.

KINO42, in downtown Kyiv, is among around 20 of the city's 50 or so cinemas that have reopened in recent weeks. As the capital's only underground cinema, it is a unique offering for movie buffs wary of air raids.

The screen—which has 42 seats around four metres (13 feet) below street level—reopened in June, its program of upcoming screenings displayed on a backlit board above the newly added words "cinema shelter".

"It's a literal cinema shelter since it's located in a basement," Ilko Gladshtein, a partner in the business, told AFP at the recent launch of its program of Ukrainian classics.

The theatre, which first opened in 2019, has always been underground—but while this was once an unremarkable aspect of its architecture, Gladshtein says it has become a "unique selling point".

"KINO42 is the safest cinema in Kyiv right now. We don't interrupt screenings during air raids," he told AFP.

The 37-year-old film festival manager and movie producer has been surprised by the size of the evening audiences, although the schedule has been bumped forward to accommodate an 11:00 pm wartime curfew.

"June is a tough month for film distribution, but I can see that people are hungry for films. We've held three charity screenings and sent around $1,000 to the Ukrainian army," he said.

"It gives us the confidence to know not only that we are entertaining people, but also that we are doing something important for the troops on the front."

Unlike multiplexes that screen the big Hollywood releases of the day, KINO42 has always prioritised Ukrainian cinema, and preserving the country's cultural identity has become especially important since the invasion.

Also read: A new brand of activists is taking aim at Ukraine war and climate crisis, together

The venue has teamed up with the Dovzhenko Centre, the nation's biggest film archive, and has expanded from one weekly screening to three, all sold out.

At a launch event on Thursday last week KINO42 put on "Odd, Bizarre and Fantastic," a series of animated shorts from the 1980s and '90s, with tickets all snapped up three days before the screening.

Stanislav Bitiutskiy, a 38-year-old researcher at the Dovzhenko Centre, says every social or political cataclysm forces a nationwide reckoning over Ukrainian identity.

"It first happened during the Maidan revolution," he told AFP, describing the aftermath of the deadly 2014 clashes between protesters and security forces that led to the overthrow of President Viktor Yanukovych.

"Now, once again, we need to redefine our identity by means of art."

A little further down the street, the much larger above-ground Zhovten picture house—which is nearly a century old—was among the first of Kyiv's reopened venues.

The multi-screen playhouse sold out a 400-seat auditorium on the launch night of its Ukrainian classics program with a showing of Sergey Paradzhanov's 1965 opus, "Shadows of Forgotten Ancestors."

"We wanted to support the country's economy as well as people's psychological wellbeing," said its director Yulia Antypova, 46.

"Psychologists say that this kind of mental decompression, and the opportunity to escape to another reality, are extremely important."

Here, the possibility of missile strikes is a constant threat.

Zhovten interrupts screenings for 20 minutes when the sirens begin and asks audiences to get to a nearby shelter.

If the alert lasts longer, the screening is cancelled and the customers are asked to come back with their tickets another day.

The return to the silver screen has been gradual, with ticket sales about 30 percent of pre-war figures.

Attendance drops every time a Russian missile slams into a civilian area.

"The human psyche is quite resilient though," says Antypova. "In a few days, attendance recovers—until the next strike."