Yacht clubs are much sought-after playgrounds of the super rich. Here are some of the best and most exclusive ones in the world 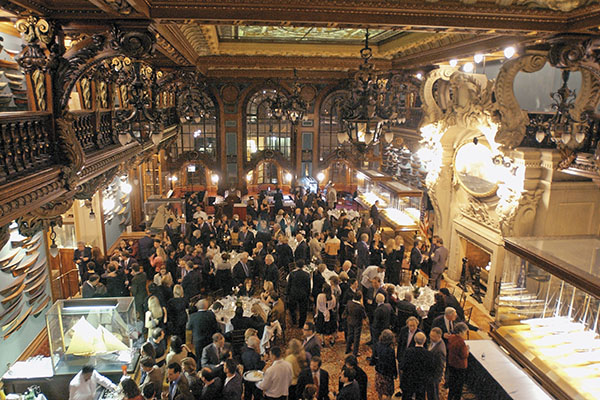 Image: Getty Images
When Old World Wealth Goes to Sea
New York Yacht Club
Where: New York, USA
About 170 years ago, nine seafaring friends led by prominent yachtsman John Cox Stevens joined hands on board the yacht, Gimcrack, in the New York Harbor to form the New York Yacht Club (NYYC). Since then, with generations of Vanderbilts and Rockefellers on the members’ roster, the NYYC has established itself as a bastion of East Coast money and influence.

This private club is an integral part of world yachting history. Stevens’s yacht, America, won the Royal Yacht Squadron’s ‘100 Guinea Cup’ (now America’s Cup), in 1870. The NYYC went on to defend the trophy until 1983, believed to be one of the longest winning streaks to date.

Clubhouse: The NYYC’s headquarters is in midtown Manhattan between Fifth Avenue and the Avenue of the Americas. Its Gothic-styled clubhouse was designed by architect Whitney Warren, who also designed New York City’s Grand Central Station. The traditional jacket-and-tie-club houses a bar and library, a dining room shaped like the interior of a hull and rooms for overnight guests. But it is the Model Room which occupies pride of place in the clubhouse. Displayed in this room are close to 1,300 scale models of boats belonging to members, an ode to the NYYC’s proud nautical heritage. In summer, yachting enthusiasts flock to the club’s second base located in Harbour Court in
Rhode Island.

Membership: With just over 3,000 members, the NYYC is a strictly by-invitation affair. While applicants are not expected to own a vessel, they are expected to know more than just starboard from port. Past members include the late US President Franklin D Roosevelt, media mogul Ted Turner and the late businessman and philanthropist, Vincent Astor. 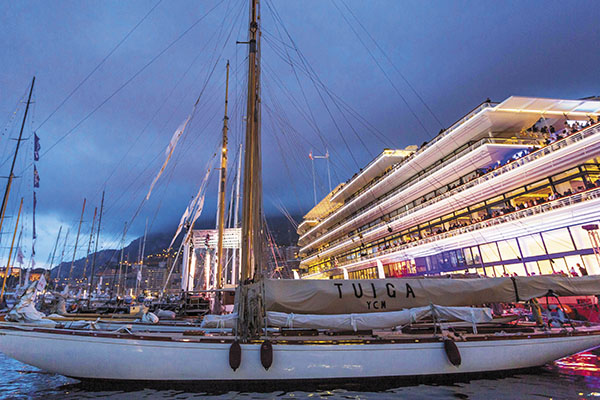 Image: Carlo Borlenghi
Royal Ties
Yacht Club De Monaco
Where: Monte Carlo, Monaco
Whether you are partial towards luxurious super-yachts or the less flamboyant, traditional rigged vessels, the Mediterranean coast is the place to be. And Monaco was Europe’s yachting capital long before Prince Rainier III founded the Yacht Club de Monaco (YCM) in 1953 at Port Hercules. The earliest recorded regatta racing on the narrow strip of the Principality’s coastline dates back to the 1860s. It was overseen by Prince Albert I. The royal family is still closely involved with the club.

Clubhouse: In the summer of 2014, Prince Albert II unveiled the spanking new club, a centrepiece of Monaco’s glittering seafront. Designed by renowned British architect Norman Foster (he designed London’s Millennium Bridge and Beijing Capital International Airport in China), the building features a series of deck-like terraces with clear views of the Mediterranean or the Formula 1 Grand Prix circuit. Take your pick. The club’s multiple bars, restaurants, outdoor swimming pool and
cabins are predominantly for members, but exceptions have been known to be made.

Membership: YCM is possibly one of the toughest clubs in the world to get into. Applicants need to be introduced by two sponsors, who, in turn, need to be elite ‘society members’ of the YCM. All applications need to be cleared by Prince Albert II, who is also the president of the YCM. It’s little wonder then that the club currently has only about 1,300 members spread across 66 countries. 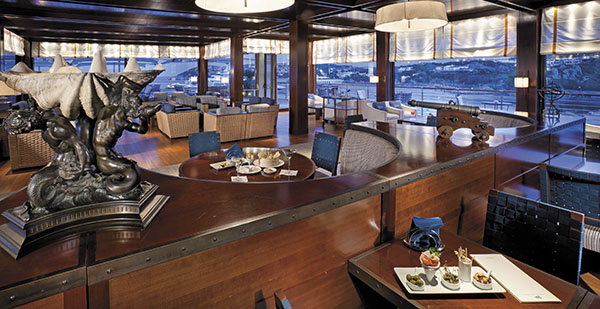 When Aga Khan founded the club in the late 1960s, regulars included Hollywood stars Elizabeth Taylor and Brigitte Bardot, Ringo Starr of the Beatles, Princess Grace of Monaco and Greek shipping magnate Aristotle Onassis. Its current crop of members is a mix of Hollywood royalty like Steven Spielberg and Gwyneth Paltrow and billionaires like oligarch Roman Abramovich. The YCCS is all about the rich and the beautiful racing hard and partying even harder.

Clubhouse: In 2003, avant-garde New York architect Peter Marino overhauled the club’s headquarters in Porto Cervo, Sardinia. The 5,800 sq foot-structure houses some of Aga Khan’s extensive art collection. Members and their guests also have access to 24 suites for overnight stays, each with a private terrace. YCCS has a winter outpost in the British Virgin Islands.

Membership: Two current members ‘of good standing’ must sponsor an applicant, but converting an application into a membership is rumoured to be very tough. That explains why the club currently has less than 500 permanent members. 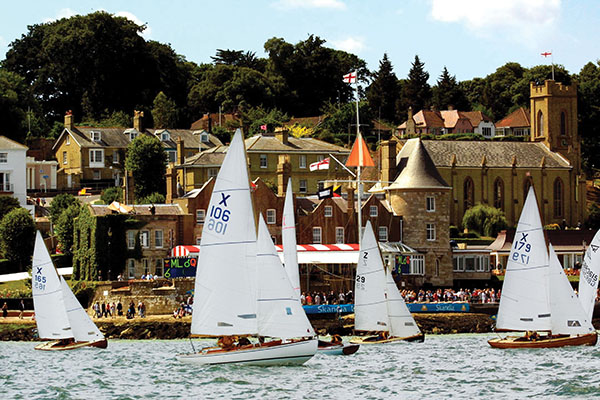 The Englishman’s Castle
Royal Yacht Squadron
Where: Isle of Wight, UK
The Royal Yacht Squadron (YRS) is the grandest and most prestigious club in the world. After all, its headquarters is a castle in the Isle of Wight. Members are allowed to fly the white ensign of the Royal Navy from their taffrail (the rail around the stern of a vessel), and the club’s admiral is Prince Philip, the Duke of Edinburgh. Founded in the Thatched House Tavern in London’s St James’s Street in 1815, the list of members includes the who’s who of UK. The highlight of the social calendar at RYS is Cowes Week, the longest running regatta in the world. It is held in the beginning of August every year, with 40 races daily and cocktail parties galore. Cowes Week ends with the very posh Royal Yacht Squadron Ball, which is open only to members and their guests.

Clubhouse: In 1539, Henry VIII built Cowes Castle on the Isle of Wight as a coastal defence, but it became the headquarters for the RYS only around the 1850s. The castle marks the start line at the Cowes Week races with its William IV cannon fired to launch the yachts.

Membership: The process starts with a potential applicant’s name being proposed by a member. One of the main criteria is an ‘active interest in yachting’. The club, which has less than 500 members, is very difficult to get into and once famously rejected the late Prime Minister, Edward Heath, despite the fact that he was an expert yachtsman. Last August, the club made headlines across the UK for lifting a 200-year-old ban on admitting women as members. 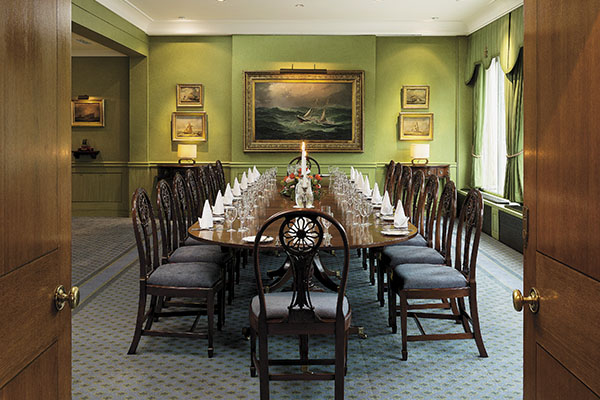 Less Starchy, but no Less Regal
Royal Thames Yacht Club
Where: London, UK
The Royal Thames Yacht Club (RTYC) is the grand-daddy of all yacht clubs in the world. In 1775, King George III’s younger brother, the Duke of Cumberland, donated a silver cup for a race on the Thames, and the RYTC was founded. The annual Cumberland Regatta takes place to this day.

With the Duke of Wales, Prince Charles, at the helm of affairs, RTYC is as closely connected to British Royalty as the Royal Yacht Squadron (RYS) but it is not as starchy as the RYS. It is one of the few clubs to organise team racing in keelboats (small- to mid-sized recreational sailing yachts).

Clubhouse: Up until the early 20th century, members met in coffee houses around central London, but in the 1920s, RTYC based its headquarters at 60 Knightsbridge, overlooking Hyde Park, and only a few minutes away from Harvey Nichols and Harrods in London.

Membership: Unlike most clubs on this list, RTYC is open and welcoming to new members. An applicant who is interested in all things nautical can ask a current member to initiate the selection process.

If you can’t join them, rent them

Yachting holidays are the ultimate in luxury, and you do not have to be a member of a club to climb into the lap of luxury. This summer, charter a super-yacht for the ultimate vacation 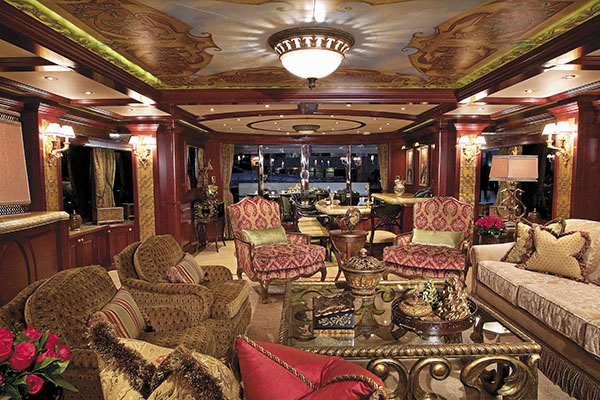 The Amarula Sun
An adrenaline addict’s dream yacht, the Amarula Sun houses many toys, including a Jetlev-Flyer (a water-propelled jetpack that allows users to fly up to 30 ft in the air at over 30 mph), a 40-foot waterslide, RXT Sea-Doos (wave runners), jet skis and a towable 32-foot Everglades fishing vessel. For a more laidback holiday, there are multiple dining options, a spa pool and even a grand piano in the saloon. The five deluxe cabins with marble en-suite facilities can accommodate up to 10 guests. Plush interiors form the perfect backdrop in the sky lounge for the library, a full wet-bar and fireplace.
Set Sail: From Paradise Islands in the Bahamas
Book it: From US for $120,000 per week

Sunseeker Predator 68
The Sunseeker Predator 68 has a top speed of 45 knots and at 68 feet, she doesn’t need a large crew, but is big enough to entertain a small group. Endless cherry wood cabinets, champagne-coloured carpets, Royal Doulton crockery and gold detailing—the Predator 68 has everything one would expect from a super-yacht. Its three cabins and two bathrooms are wrapped around a spacious saloon.There is also a 26-bottle wine refrigerator.  Some of the toys on board include the Williams 325 superfast tender, Nautique water-skis and snorkelling gear.
Set Sail: From Bodrum Peninsula, Turkey
Book It: From 21,000 euros per week

Force Blue
This converted icebreaker has expansive deck spaces, world-class spa facilities and five lush suite cabins. The Force Blue (formerly called Big Roi) is a mega yacht designed by Tom Fexas. The bridge deck can seat up to 80 guests and has a bar and DJ station. Though most of the flying deck accommodates the helicopter pad, guests can also spend time in the oversized jacuzzi. From the en-suite cabins to common areas, every inch of the yacht’s interiors is custom-designed. The saloon covers the full beam of the ship and boasts of a magnificent Vicenza stone fireplace and seven hand-made, alligator-hide armchairs. On the main deck, the dining room features a leather-topped table, a Fernando Botero painting and Giacomo Manzù sculptures. It also has a 90-sq mt spa with a Turkish bath.
Set Sail: From Monte Carlo, Monaco
Book It: From 235,000 euros per week 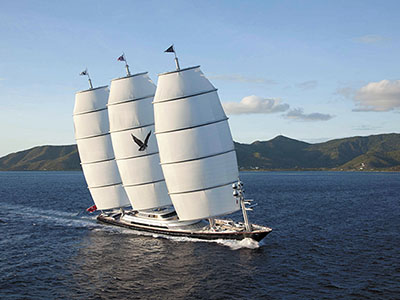 The Maltese Falcon
At about 290 ft, with three remote-controlled white sails on 190-ft carbon fibre masts, this super cruiser is unlike any yacht in the world. Named after the 1941 Humphrey Bogart classic, the yacht, with a cruising speed of 15 knots of motor power, can cross the Atlantic in 10 days. She turns into the world’s largest outdoor cinema on a yacht with films projected onto the rig sail. Designed by British architect Ken Freivokh, it can accommodate 12 guests in five suites. Some of the toys include a jet tender, a waterslide, windsurfers and a banana boat.
Set Sail: From Cannes or St Tropez in France
Book It: From $400,000 per week