Despite a mixed year for Bollywood, malls and multiplexes will continue to coexist 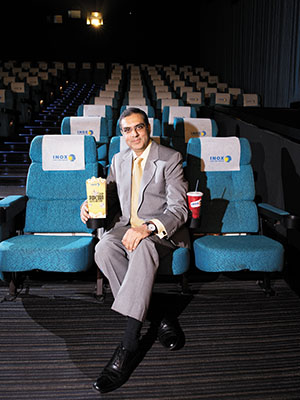 Look around you. On most weekends, there are as many—if not more—people in a thriving mall as there are in a park or at the beach. “As a race, we are not outdoors people; not heavily into trekking or beaches. For us, a good evening out is an air-conditioned place to shop, eat and watch a movie,” says Alok Tandon, CEO of Inox Leisure, the entertainment arm of the Inox Group. “And this will not change.”

This cultural proclivity is one of the many reasons why the multiplex business is optimistic, despite a mixed year for Bollywood, sluggish consumer spending and project delays in the construction of new shopping malls in tier I cities. As Sanjeev Kumar Bijli, joint managing director at PVR Ltd, India’s biggest multiplex chain, puts it, “The consumption story is too strong. The spending density is low at this stage, but I expect it to come back in about six to eight months.”

This buoyancy is backed by the fact that the country is still under-screened. There are about 9,000 screens in India, of which multiplexes account for approximately 25 percent. The total screen density in India is eight per million, in comparison with 117 per million in the US. For multiplexes, it is less than one screen per million, industry data shows.

But the factor that cannot be ignored as far as the future of multiplexes is concerned is the mall. As Ajay Bijli, chairman and managing director of PVR, points out, malls will continue to guide the future of multiplexes. “Multiplexes form only a tenth space at the mall. They are integral but are not driving malls at present,” he says.
And the others are in agreement. “Malls and multiplexes will have to coexist,” says Tandon, whose Inox has 368 screens at 95 properties across 52 cities. Only a handful of the 95 properties are standalone (operating without a mall).

In 2002, when there were very few malls in India, Inox started operations by buying two properties—one in Pune (Bund Garden) and another in Vadodara (Race Course)—and developed them into a mall and a multiplex.  “These worked well for us, but as professional developers started making malls, we started concentrating on our core competency of running cinema halls,” Tandon says.

PVR, like Inox, plans for an all-India expansion. It has already increased its presence to mall-centric places like Noida, Gurgaon and Chennai, and moved to smaller towns like Nanded and Latur in Maharashtra and Ujjain in Madhya Pradesh. Today, PVR has 462 screens across 104 properties in 44 cities and one union territory.

The near future, says the senior Bijli, is less of a worry since most of the malls they have signed up with will come up. “It is the five years after that which I am worried about, as no new malls are being planned for.”