One of the world's largest single-site projects in Rewa, Madhya Pradesh, has set a new normal for low tariffs. It could well be a defining moment in the nation's 100 GW solar journey 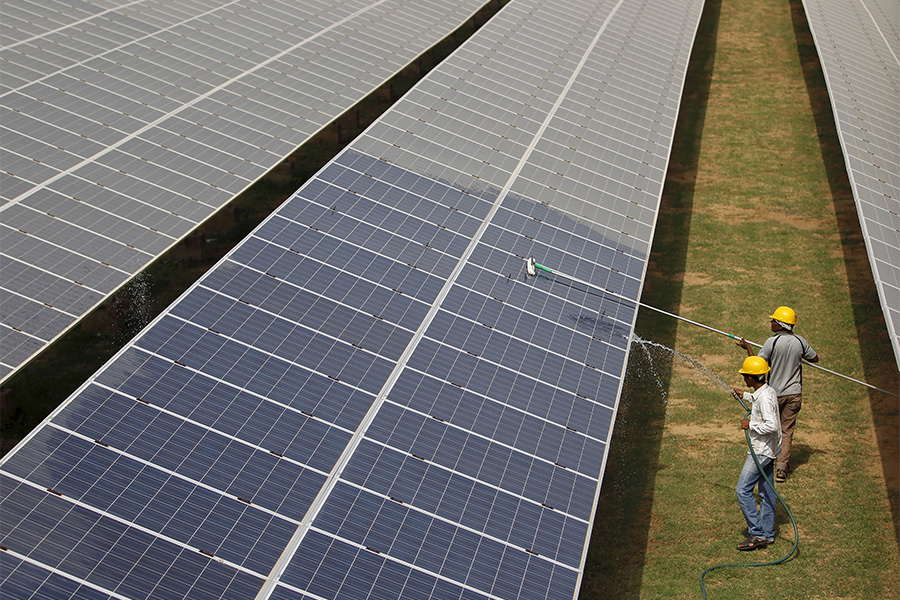 Image: Amit Dave / Reuters (For illustrative purposes only)
A year-and-a-half ago, India led from the front at the Conference of Parties (COP 21) by making a commitment to install 100 GW of solar power capacity by 2022. India established a bold vision of taking solar to an unparalleled scale. This meant taking the country’s emerging story in solar and renewable energy to a whole new level.

The 750 MW solar ultra-mega power project in Rewa, Madhya Pradesh, is symbolic of making that story of ‘scale in solar’ real. It is one of the world’s largest single-site solar projects. Once commissioned, it will nearly double installed solar capacity in Madhya Pradesh, add 7.5 percent of India’s total installed solar capacity as of 2016 and mobilise private sector investment of about $500 million. In addition, the project will avoid 1 million tonnes of greenhouse gas emissions annually.

The large scale of the project is only one of the several features that it has helped India achieve. Perhaps, the most visible outcome is that India moved into a regime of below 5 US cents per kilowatt tariff range without any viability gap funding (subsidy to developers to keep tariffs low). In fact, a first-year tariff of 4.4 US cents (Rs2.97) was achieved. This is historic as solar energy tariffs are, for the first time, lower than thermal power rates from new power plants, placing India among countries that have achieved grid parity.

It means that solar could now be a ‘fuel of choice’ for procurers looking to set up new generation capacity—that is what makes solar at scale a reality, not just for India but also for many other emerging countries. This has smashed the perception across the country that solar power is expensive.

Looking back, the Electricity Act of 2003 had allowed large power consumers to replace power from their own utility company with power purchased from third parties through open access. However, it was the Rewa transaction that helped operationalise inter-state open access for solar power for the first time in India by devising innovative power scheduling arrangements to help supply power to the Delhi Metro Railway Corporation.

This paves the way for a new category of power procurers from solar projects that could join utility companies in purchasing solar power, resulting in a record jump in solar power demand.

How did this happen?
The project is remarkable in more ways than one. First, it reflects the state government’s outstanding initiative to give a fresh look at structuring solar projects, while at the same time building upon a large number of enabling policies put in place by the government of India.

Second, the Madhya Pradesh government demonstrated a bold approach by adopting an untried path of going about creating a new market when it decided to do away with viability gap funding and instead adopted a truly “plug-and-play” model of project development. It helped prepare projects comprehensively before bidding, de-risk the project, proactively build the required solar park infrastructure, revamp power purchase agreements to make them internationally bankable, integrate a creditworthy institution (Delhi Metro) as open access power procurers, and follow an open, consultative and transparent re-engineered auction process.

Finally, the state government’s foresight in engaging world-class expertise for advice on project structuring and implementation helped evolve a nuanced investment framework and process that were highly appreciated by international and domestic investors.

In addition, the government proactively leveraged IFC’s expertise as a transaction advisor in simulating a typical ‘private sector decision-making framework’ to assess the project for achieving optimum bid outcomes. This enabled the government to systematically identify risks that impact private sector returns and discover the appropriate energy tariff.

Engaging IFC translated into extensive negotiations of power purchase agreements and other project agreements with stakeholders prior to bidding. This enabled introducing internationally acceptable principles of project finance in the renewable energy contractual framework in India. These include compensation to developers for prolonged unavailability of the transmission system and for early termination of contracts by procurers, strong substitution rights for lenders and a unique three-tiered payment security mechanism that includes a state government guarantee for the payment obligations of the procuring utility.

The proactive structuring and de-risking of the project were rewarded with an unprecedented market response, with 20 bidders cumulatively offering 10 times the project capacity. Several reputed international developers participated in a state-led bid for the first time as they found the project structure and agreements bankable. 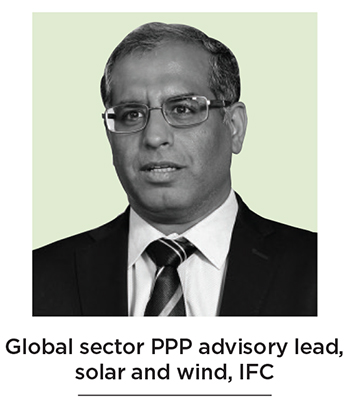 Having set a new normal for solar power tariffs, the project has resulted in procurers having a close relook at the level of project preparedness and enhancing the bankability of project agreements on the one hand, and bidders driving hard bargains with their panel suppliers and financiers on the other. So, Rewa is a potential tipping point or a defining moment in the nation’s 100 GW solar journey.

Globally, there are only a few countries that have achieved lower tariffs than Rewa. World Bank 2016 data indicates that solar tariffs went as low as 3.6 US cents/kWh in Mexico, 2.9/kWh in Chile, and 2.4/kWh in UAE. These lower tariffs could partially reflect differences in solar radiation, but it also means that India could achieve even better results through a continued proactive effort to structuring projects well.

In the long run, achieving the ambitious scale that India has set for itself would depend on largescale investments of about $13 billion per annum flowing into the sector for the next five years.

The Rewa experience opens up an opportunity for creating a new largescale solar market without subsidy and with direct participation from open access consumers. And there is much to learn from that.

Tweets by @forbesindia
Sliding tariffs mean more power, but is the trend sustainable?
Keep your customers happy but disorganized to prevent buyer power