Dangerous Turns Ahead for National Highways

The National Highway Authority of India may find itself unable to settle claims worth more than Rs. 10,000 crore from contractors 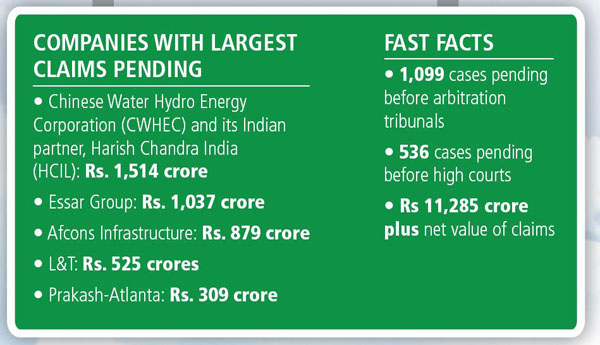 Acouple of years ago, the Comptroller and Auditor General’s office made some harsh observations about how the National Highways Authority of India has executed several projects.

The CAG had pointed out that in many projects, the NHAI had allowed contractors to build roads without asking for a Detailed Project Report (DPR), with fixed specifics of construction, costing and labour requirements. In some other projects, the reports were faulty, leaving room for ambiguity after contracts were awarded.

What the CAG review did not cover was NHAI’s negligence that had made way for a secondary system of payments in the business of building India’s highways, which is adding a massive burden on the exchequer.
Frequent changes in alignment of roads and structures such as underpasses and flyovers are the norm. This has led to differences between the NHAI and contractors over the extent of cost overruns, with disagreements being dragged to arbitrators.

After a protracted battle with contractors to settle disputes, this month the government set up an empowered group of ministers to decide on fast-tracking pending claims that now amount to Rs. 10,219 crore.

The sum is just a shade less than the NHAI’s annual allocation. To make matters worse, about 40 percent of this amount is the interest that has accumulated over the long periods of arbitration, say NHAI officers.

The empowered group of ministers is expected to clear the recommendations of the B.K. Chaturvedi committee that had suggested fast-tracking the payments claimed by contractors after they were reviewed by a group of experts.

A former high-ranking NHAI officer says, “If the burden of the claims falls on the highway authority this year, there will be serious trouble. Unless the government steps in with some assistance, the NHAI will be unable to make these payments.”

There are 536 disputes pending before high courts while 1,099 disputes are pending before the arbitration tribunals of the NHAI. In most cases, the claims have been filed for additional costs of construction and losses due to the NHAI delaying handing over land for projects.

Mukul Upadhyaya, the general manager handling arbitration at the NHAI, said it was impossible to get contracts executed without the flexibility of making changes mid-way. “There are times when the local people want some changes made to the alignment or they want more underpasses. What do you do then? Variations are a necessary part of highway contracts,” he said, rubbishing allegations of connivance between NHAI officers and
contractors.

A former NHAI officer, who did not wish to be identified, says, “The current system allows contractors to file frivolous claims as there is no penal provision to deal with companies who do this. There are a number of cases where companies have claimed bills that amount to thrice the value of the contract.”

The officer, who has served the agency at the highest level for several years, adds that there have been instances where the Authority has suspected connivance of field officers with the contractors. “There have been instances where we have taken action against officers who have been unable to provide the paperwork that would strengthen NHAI’s case during arbitration. But the Authority is no inquiry commission on the matter.”

“There is a racket within the NHAI in which contractors send inflated bills and the officers help them get paid. It is time the CAG looked specifically at these payments,” said a senior government official who has supervised the working of the NHAI.

Infrastructure expert Partho Mukhopadhyaya says that the flourishing practice of arbitrators at the NHAI was indicative of the top bosses at the Authority shirking responsibility. “No one has to take responsibility for cost and time overruns at the NHAI as all these projects end up before the arbitrators. So, neither the contractor nor the officials have to explain why a particular work has gone haywire,” he says.

B. Seenaiah, the president of the National Highways Builders Federation, argues that most of the claims are genuine. “If the NHAI had settled these payments on time they would not have to deal with huge interest payments. Variations and cost escalation are all part and parcel of the highway business; you cannot do away with them.”

The Chaturvedi committee had also recommended penal provisions to make consultants liable for faulty DPRs. It had also said that any compensation awarded because of non-availability of land should be limited only to the acreage that the NHAI was unable to acquire. These measures, if implemented, would ensure a more stringent monitoring of projects and reduce litigation.

Mahesh Zagade, an executive with the Essar Group, said the NHAI should clear its backlog of arbitration cases at the earliest. “Most of the contracts that end up in arbitration are EPC [engineering, procurement and construction] contracts. The NHAI is fast moving towards the Design Build Operate Transfer system in which most risks have to be necessarily met by the contractors,” said Zagade.