The new incentives build on a program the company launched last June to encourage anyone, employee or not, to get into the competitive business of last-mile package delivery 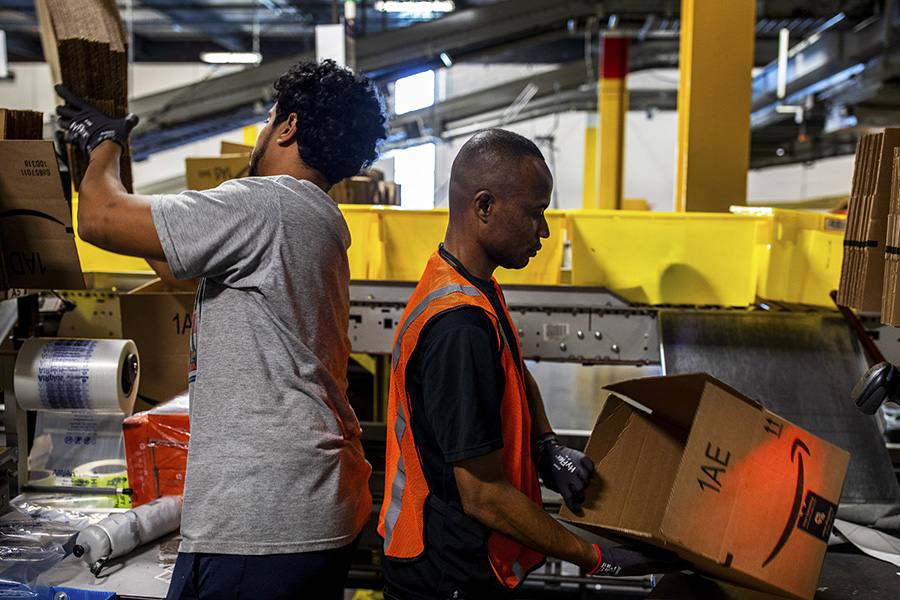 Workers sort products into different bins, box them and send them out for delivery, at an Amazon fulfillment center in Carteret, N.J., Oct. 18, 2018. As Amazon aims to cut shipping from two days to a single day, the company announced a new incentive program that encourages its employees to quit and start their own delivery businesses.
Image: Demetrius Freeman/The New York Times

First, Amazon made two-day shipping the norm. Now, as it aims to cut that to a single day, the company is encouraging its employees to quit and start their own delivery businesses.
Under a new incentive program, announced on Monday, Amazon said that it would fund up to $10,000 in startup costs and provide three months of pay to any employee who decides to make the jump. The new incentives build on a program the company launched last June to encourage anyone, employee or not, to get into the competitive business of last-mile package delivery.

“We’ve heard from associates that they want to participate in the program but struggled with the transition,” Dave Clark, senior vice president of worldwide operations, said in a statement. “Now we have a path.” In addition to the financial assistance, employees who take Amazon up on its offer will get a consistent stream of packages to deliver and access to technology and training. They will also receive discounts on insurance and on Amazon-branded vans and uniforms. The company has faced criticism in recent years for how it treats and pays warehouse employees and contract drivers. In response, it announced last October that it would raise its minimum wage to $15 an hour, though the change did not apply to contract workers. The announcement comes as Amazon invests more heavily in providing one-day shipping to Prime members, part of a broader effort to combat slowing membership growth in the $119-a-year program. In seeding the delivery startups, the company is making a small investment in the distribution network that will make that possible, while letting the business owners grow from there, said Beth Davis-Sramek, a professor of supply chain management at Auburn University. “You’re really stretching your capital,” she said. “They’ve extended their network with a very, very low upfront cost.” The program also lets Amazon place former employees in a crucial part of the delivery process, said Bryan Wyatt, who focuses on transportation for Chainalytics, a supply chain consultancy. “They put them in arguably one of the most important positions in the company and that’s directly customer facing,” he said. For the employees, the incentive program reduces many of the risks of starting a delivery business, especially finding a client, Davis-Sramek said. But there are drawbacks to that reliance on Amazon. “The company that puts you in business can put you out of business real fast,” she said. More than 200 businesses have been created since the program launched nearly a year ago, employing thousands of local drivers, the company said. Amazon hopes that hundreds more will be created this year. The retailer offers training, and the process of getting a business running can take anywhere from one to six months, depending on delivery opportunities, according to a brochure. Owners can expect to make a profit of $75,000 to $300,000 a year, the company said.

Tweets by @forbes_india
The secret sauce to Bigbasket's 10 million plus on-time deliveries
Ecommerce: What the past 10 years mean for the future