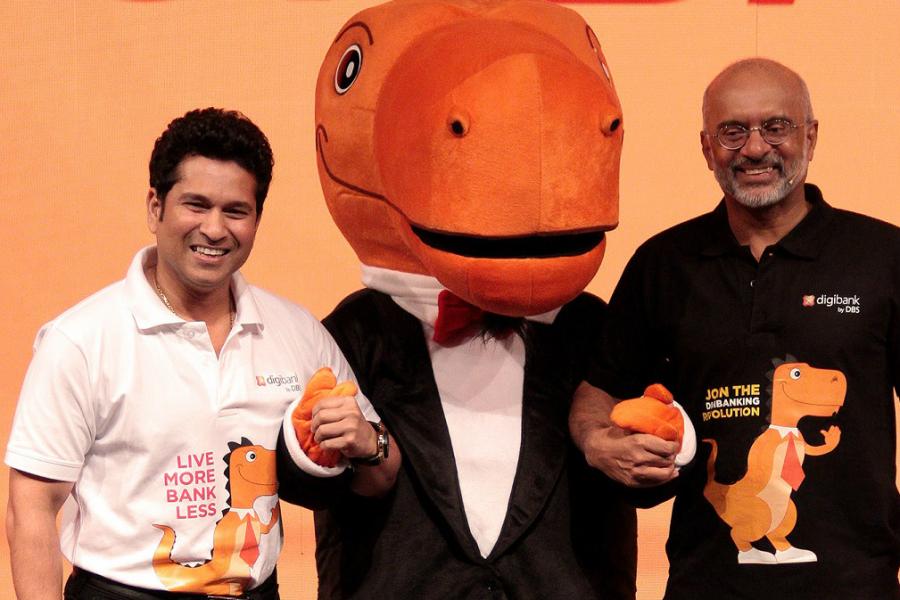 The DBS banking platform was launched in the presence of Indian cricket icon Sachin Tendulkar, who has opened a Digibank account

DBS, Singapore’s largest lender, unveiled on Tuesday India’s first mobile-only bank, in a bid to help expand its presence across India, by tapping into the country's ongoing technological and digital revolution in financial services.

The "Digibank" using biometrics and artificial intelligence technologies would be paperless and branchless. DBS CEO Piyush Gupta, who is based out of Singapore, said that he hopes to acquire five million accounts in India over the next five years through this platform.

A banking savings account can be opened with one-time biometric authentication and the customer’s Aadhaar and PAN card details.

Besides the positive socio-demographics and being the fastest growing major economy in the world, India offered a unique stack in the form of an architectural framework which is being created, Gupta said.

This includes an existing eKYC (know your client) system and the Aadhaar authentication framework, a signature and digilocker, the just launched Unified Payments Interface (UPI) – which allows for swift payment across banks - and finally, a consent architecture system, where information is made freely available to anyone else for use.

“This type of architecture is unique: it is not available in the United States or China. Many individual pieces of the architecture exist but they tend to be only in private hands. India is one of the few countries in the world which has put together a public architecture to enable this tele-services system,” Gupta said in a presentation earlier in the day.

DBS will offer a seven percent interest rate [with no minimum balance required] on the digibank savings account, compared to the five percent for existing customers.

The banking platform was launched in the presence of Indian cricket icon Sachin Tendulkar, who has opened a Digibank account.

India currently contributes about five percent to DBS’s total business. In FY15, the bank had posted a loss of Rs 275 crore for India operations, due to higher provisioning. The bank is “likely to return to a small profit” in the twelve months ending March 2016, Gupta said.

He added that India is in the midst of a revolution where fintech companies are starting to disrupt the financial services’ balance sheets. These companies are creating products and services which are involved in raising money, lending, payment and remittances systems and security solutions. This often is being done better, smarter and cheaper than banks.

The only issue is that fintech companies do not have a monopoly or prerogative on technologies of the world, he said.

Gupta was confident that digital technology will continue to change the way people bank. “Each company, including ours will have to evolve and grow,” Gupta told Forbes India, in an interview.

Earlier this month, the Reserve Bank of India (RBI) governor Raghuram Rajan and the National Payments Corporation of India launched the UPI programme, which makes mobile payments swifter and simpler. The UPI app will be inter-operable across multiple banks and allows customers to make or receive payments through a single identifier like the Aadhaar number or a virtual address.

DBS has been in the news, being one of the few foreign banks in India which plans to convert into a wholly-owned subsidiary (WOS) in India. The application, filed in April 2015, awaits an approval from the RBI.

The WOS plan of DBS is to help the bank expand lending to small-and-medium enterprises (SME), transaction business and its wealth management presence, Gupta said. Once it receives an WOS approval, DBS plans to expand its network to between 60 and 70 branches, from the existing twelve.

DBS has a cost to income ratio of around 55 percent in India, which is higher than its global average of around 45 percent. DBS, through the Digibank platform will seek to build a liability book of Rs 50,000 crore and Rs 10,000 crore on the asset side over the next three years, Gupta said.

He said DBS would launch Digibank in Indonesia and China in coming 12-18 months.

Tweets by @forbesindia
Nita Ambani: The first lady of Indian business
'Vijay Mallya is a fugitive from justice': Attorney General