Actors jointly ranked 71st; Akshay Kumar and Dhoni are the only other Indians to feature on the elite list 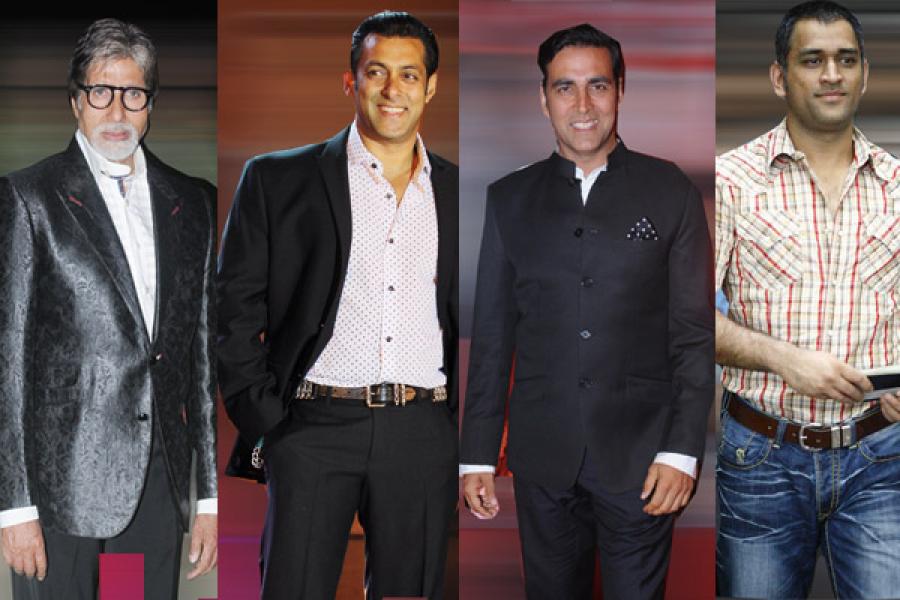 Bachchan, who featured in films like Bhootnath Returns (2014) and hosted the eighth season of Kaun Banega Crorepati, ranks 71st on the prestigious list with $33.5 million in earnings. Salman Khan, who hosted four seasons of the reality TV show, Bigg Boss, and has multiple brand endorsements like Thumbs-Up and Suzuki in his kitty, also ranks 71st on the list.

Akshay Kumar, who has starred in over 136 movies, bolstered his earnings by hosting shows like Dare 2 Dance and endorsing Honda motorcycles among other brands. He occupies the 76th slot with $32.5 million in earnings.

India’s ODI and T20 captain MS Dhoni is the only Indian sportsman on the list. He ranks 82nd with $31 million against his name. As co-producer of MS Dhoni: The Untold Story, an upcoming biopic on him, he has already pocketed $3 million.

Musicians are ranked high on the global list, occupying 10 of the top 25 slots. On the cover is singer Katy Perry, who ranks third with $135 million. A majority of her earnings came from her Prismatic World Tour, where she grossed more than $2 million per city over the course of 126 shows--75 of them overseas--while pulling in an astounding $20 per head in merchandise sales.

Chef Gordon Ramsay (No 21) with $60 million, author James Patterson (No 7) with $89 million and model Gisele Bündchen (No 46) with $44 million were sole representatives in their respective categories.

Footballers Neymar (No 82) and James Rodriguez (No 89), both aged 23, are the youngest celebrities on the list, with $31 million and $29 million respectively. Musician Paul McCartney (No 35), aged 73, is the oldest with $51.5 million against his name. Maria Sharapova (No 88) is the only female athlete on the elite list with $29.5 million.

There have been several changes in the methodology this year. For the first time, the list has moved beyond US celebrities and ranks the world’s 100 highest-paid celebrities, irrespective of their nationality. Another change is that the list includes only “front of camera” talent, eliminating producers who make most of their money behind the scenes. Also, the Celebrity 100 is now based entirely on earnings over the last year (earnings consisted of pretax income between June 1, 2014, and June 1, 2015; management, agent and attorney fees were not deducted).