Harvard's actions represent a remarkable fall from grace for an economist who until recently was among the profession's most admired researchers — and one of Harvard's highest-paid faculty members.

By Ben Casselman and Jim Tankersley 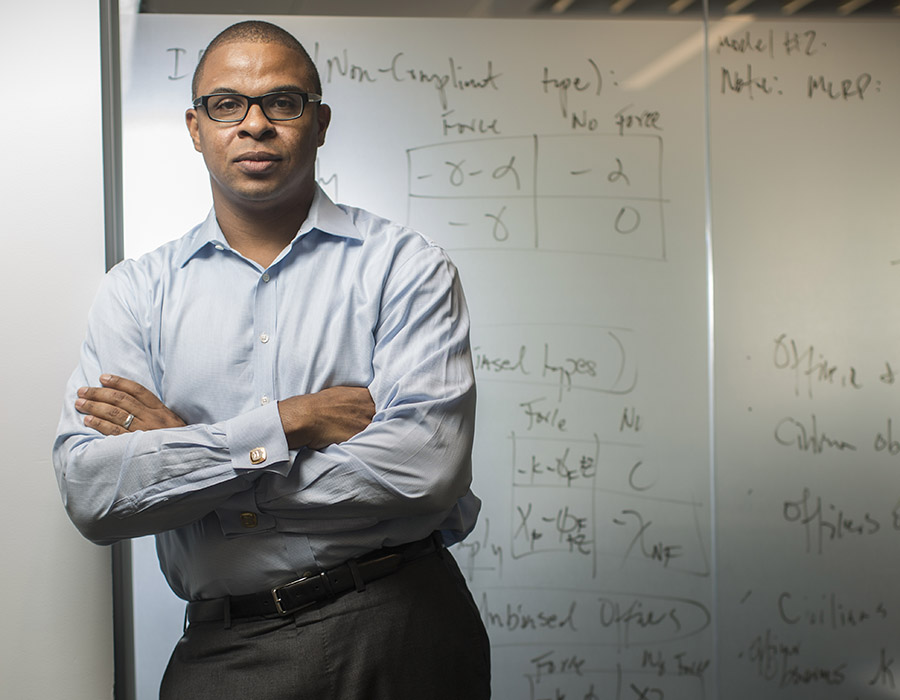 FILE-- Roland Fryer, an economics professor at Harvard, in Cambridge, Mass., July 7, 2016. Fryer, a onetime rising star in economics who has been accused by multiple women of sexual harassment, will lose his Harvard University research lab and be suspended for two years, the university said July 10, 2019. Fryer has defended himself from the charges in Harvard investigations, and has pointed to his lab as a place where women have thrived professionally. (Erik Jacobs/The New York Times)

Roland G. Fryer, a onetime rising star in economics who has been accused by several women of sexual harassment, will lose his Harvard University research lab and be suspended for two years, the university said Wednesday.

Harvard’s actions represent a remarkable fall from grace for an economist who until recently was among the profession’s most admired researchers — and one of Harvard’s highest-paid faculty members. He is also one of the most prominent African Americans in a field that has long struggled with racial diversity.

Fryer, 42, has been the subject of several concurrent university investigations, which concluded that he had engaged in “unwelcome conduct of a sexual nature” against at least five employees over the course of a decade.

In a letter to the economics department Wednesday, Claudine Gay, a Harvard dean, said Fryer would be put on administrative leave for two years, during which he cannot teach or conduct research using university resources. The Education Innovation Laboratory, the off-campus space known as EdLabs where he conducted most of his work, will be permanently closed. A Harvard spokeswoman said he would not be paid during his suspension.

After the suspension, Fryer will be barred from “advising or supervisory roles,” and his teaching will be restricted. Gay said she would revisit those limitations after a further two years.

“Professor Fryer exhibited a pattern of behavior that failed to meet the expectations of conduct within our community and was harmful to the well-being of its members,” Gay said in the letter. “The totality of these behaviors is a clear violation of institutional norms and a betrayal of the trust” of the Harvard community.

Gay said the investigations also uncovered other conduct that violated its policies. A Harvard spokeswoman said that conduct related to Fryer’s spending and the lab’s finances.

Under Harvard’s rules, Gay had sole discretion over Fryer’s punishment, but could not fire him. Only the Harvard Corporation — the university’s equivalent of a board of trustees — has the authority to revoke tenure, and can do so only for “grave misconduct or neglect of duty.”

Fryer has defended himself from the charges in the Harvard investigations. He has pointed to his lab as a place where women have thrived professionally.

“I am deeply disappointed, particularly because the important and outstanding work of my colleagues in our economics research lab has been forced to stop,” Fryer said in a statement released by a spokesman Wednesday. “Harvard has spoken. In due course, I will as well.”

Harvard’s decision comes after a process that began in June 2017 when a woman who worked for Fryer reported to human resources officials that he had repeatedly harassed her. Several other women came forward with similar accusations.

The complaints were brought under Title IX, the federal statute prohibiting sex-based discrimination by educational institutions that get federal funding.

In the spring of 2018, Harvard imposed “interim measures” on Fryer, including barring him from entering EdLabs.

The first concluded investigation, in the fall of 2018, found that Fryer violated university policy with unwelcome conduct on seven occasions. They included one in which Fryer referred to a date-rape drug in a text message to a female assistant and told her, as she was out drinking with friends: “Be safe tonight. Wear gloves if ur gonna have hand action.”

A second investigation, according to documents reviewed by The New York Times, found in February that Fryer had engaged in unwelcome conduct when he sent a pair of BlackBerry messages that were sexual in nature to a former assistant. It concluded that the messages were “sufficiently severe, persistent, or pervasive to create a hostile environment for her” in the research lab. One, sent after work hours, read: “Ur lucky ur not here. I would either tackle, bite u or both.”

The university’s investigations did not substantiate some other complaints, including ones accusing Fryer of retaliation.

Fryer repeatedly told a university investigator that he was being unfairly scrutinized, at one point asking if he was being singled out for his skin color, though some of the accusers were minority women. He explained his “tackle, bite u or both” message as a “same-race thing” with an assistant who was black. The woman told the investigator that the comment was “not a thing that black people say to one another,” in her experience.

At another point, Fryer asked the investigator to analyze all emails sent from Harvard professors over the past two decades, “to ensure there are no undocumented policy violations according to the standard to which I am being held.”

One of his accusers also filed a complaint with the Massachusetts Commission Against Discrimination, but withdrew it in February because she had reached a “satisfactory settlement” with Harvard. The terms of that settlement have not been made public.

Fryer came to prominence as part of a new wave of researchers using rigorous empirical methods to tackle social issues beyond traditional economics. Much of his research has focused on the causes of racial achievement gaps in education, and how to close them. Fryer has put some of his ideas into practice: As chief equality officer for New York City’s Department of Education under Mayor Michael Bloomberg, he spearheaded a pilot program that paid low-income students for earning good test scores.

Fryer received tenure at age 30, received a MacArthur “genius grant” in 2011, and in 2015 was given the John Bates Clark Medal, which honors an American under 40 for “a significant contribution to economic thought and knowledge.” His Harvard salary was more than $600,000, the university’s 2016 tax filing shows.

Profiles emphasized his rise from a rough childhood in Florida and Texas. He won a scholarship to the University of Texas, Arlington, and graduated in 2 1/2 years before earning an economics doctorate from Penn State.

The allegations against Fryer became public last year when The Harvard Crimson, a campus newspaper, reported on some of the complaints. Months later, Fryer was elected to the executive board of the American Economics Association, the most prestigious body in academic economics. He resigned from that post in December, before formally taking office, after The New York Times reported new details of the allegations against him.

The furor helped accelerate an ongoing reckoning in economics, a field that has long had a reputation for hostility to women. At the economics association’s annual meeting in Atlanta in January, just weeks after the Times article on Fryer, women shared stories of discrimination and harassment and demanded reforms.

In March, the association published the results of a survey finding widespread harassment, bias and outright assault in the profession. It also announced a number of policy changes, including new procedures for removing officers and members accused of misconduct.

Kathryn Holston, a Harvard graduate student who was a co-founder of an advocacy group for women in economics, said it was hard to evaluate Fryer’s punishment because Harvard has disclosed few details of the case. But she said the case highlighted the need for changes, including a system across the profession for reporting inappropriate behavior.

“We do certainly know that this is a severe problem,” she said. “There’s been a lot of progress in the past year, but much more needs to be done.”

In a letter to the editor after the Times article, Fryer said he was wrong to have allowed off-color jokes in the lab, and apologized “if anyone who worked at the lab ever felt alienated, confused or offended by the environment.” But he denied bullying anyone or retaliating against employees, and said he was proud of his record of “hiring, retaining and promoting women.”

Others have spoken up in Fryer’s defense. Tanaya Devi, a Harvard graduate student and former Ed Labs employee, said she was “stunned and disappointed” by the punishment, which she called a “disproportionate result compared to the allegations.”

“We devoted our lives passionately to the cause of racial differences and now that has forcefully been ceased by Harvard administrators,” Devi wrote in an email Wednesday. “My research with Prof. Fryer on criminal justice in America is halted for 4 years. I am trying hard to understand how Harvard deems this to be ‘just.’ ”

Tweets by @forbesindia
How India's hydroponic farmers are building businesses
Karma: Under a new CEO, the luxury electric-vehicle maker is reincarnating itself again"