Company says it expects a rebound in domestic steel demand this fiscal, but another difficult year in Europe 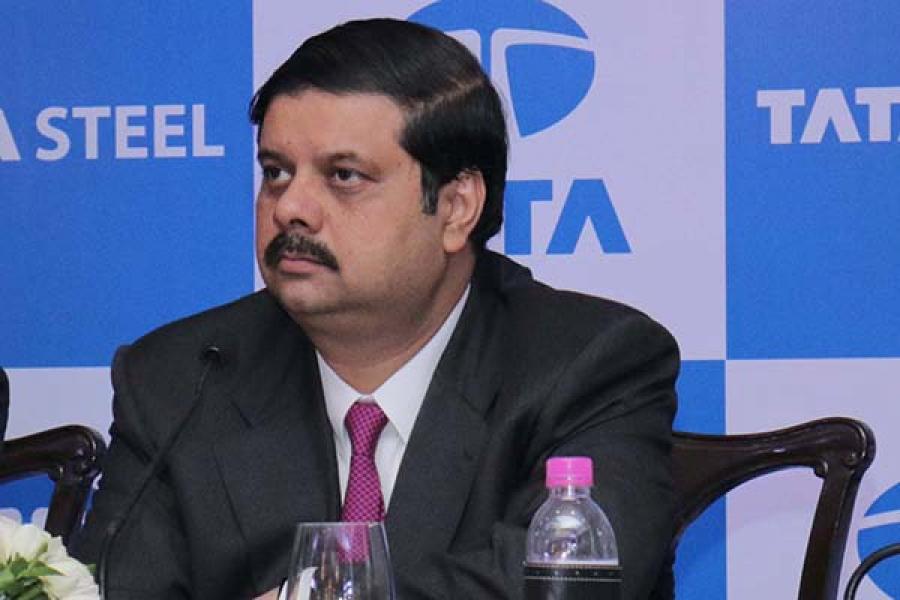 Koushik Chatterjee, Group Executive Director (Finance and Corporate) Tata Steel, said he expects the company's sales in India to grow to around 9.5 MT this year from 8.8 MT last year, while Europe volumes may remain flat.

A weak steel market in India and Europe, and recognition of impairment in the value of its international assets, led Tata Steel to post a net loss of Rs 5,674 crore for the quarter ended March 31, 2015, against a net profit of Rs 1,036 crore in the year-ago quarter.

Subdued demand across steel-consuming industries in India during the March quarter and FY15 in general, along with a surge in low-priced steel imports from China, Japan and Korea, led to a sharp correction in steel prices during the last few months of the previous fiscal. This, along with higher expenses on account of imported iron ore (in the absence of domestic supply of the mineral due to restrictions on mining), ate into the operating profitability of Tata Steel and profit margins for the period.

Tata Steel reported earnings before interest, tax, depreciation and amortisation (Ebitda) of Rs 1,580 crore during the fourth quarter of fiscal 2015, a 68% decline over a year ago, and half of the operating profit reported in the preceding quarter.

For the quarter ended March 31, the company recognised a non-cash writedown of goodwill and assets of Rs 4,951 crore in its consolidated financial results, “mainly relating to the long products UK business in Tata Steel Europe, which is now fully impaired”. The heavy impairment charge is what led Tata Steel to report a net loss for the quarter.

This is the second time that Tata Steel has recognised an impairment charge on account of its long products business in Europe, which it seeks to sell to the Geneva-based Klesch Group. It is countering opposition from the local workers’ unions to the proposed divestment and the company maintains that it is in consultation with the unions to find a solution to the impasse.

Turnover from Tata Steel’s standalone India business fell 13 percent year-on-year to Rs 10,635 crore in the March quarter, but rose 7 percent sequentially. In a sign of pickup in steel demand in the country, Tata Steel said the sequential improvement in turnover was a result of higher volumes, though prices remained under pressure.

Added to the fall in price realisations was a steep increase in iron ore costs due to the purchase of around five million tonnes of the mineral in previous quarters when the company’s captive iron ore mines were closed due to regulatory action. This led to a 59 percent year-on-year decline in Ebitda in the India business at Rs 1,661 crore, and a 55.5 percent drop in net profit to Rs 881 crore.

At Tata Steel Europe, steel volumes in the quarter remained stable but turnover dropped around 20 percent over the year earlier to Rs 19,537 crore due to reduced prices. However, on the back of cost efficiencies and its strategy to sell a higher proportion of differentiated steel, the company reported positive earnings before interest and Tax (Ebit) of Rs 1,015 crore. This was the first time since 2010 that Tata Steel Europe has reported positive Ebit.

The consolidated Ebitda per tonne of steel produced by Tata Steel came in at Rs 4,835 for the March quarter, which is a 25 percent drop over last year and a marginal drop over the Rs 4,905 per tonne reported in the December quarter.

Koushik Chatterjee, Tata Steel’s group executive director, finance and corporate, said that the volume of steel sold by the company in the current fiscal should rise, in line with an expected improvement in the Indian economy in the second half of the year.

Tata Steel’s capital expenditure will also come down going forward, Chatterjee added, with the firm’s greenfield Kalinganagar steel plant in Odisha nearing commission.
In FY15, Tata Steel spent Rs 13,500 crore towards capital expenditure and is expected to spend around Rs 10,000 crore this fiscal. Tata Steel has spent Rs 20,900 crore so far to develop the six million tonnes per annum-steel plant at Kalinganagar, which will be ready for production in the second half of FY16.Tata Steel had a consolidated net debt of Rs 69,000 crore as on March 31, Chatterjee said.