Murdoch's standard-bearing national newspaper, The Australian, has repeatedly argued that this year's fires are no worse than those of the past 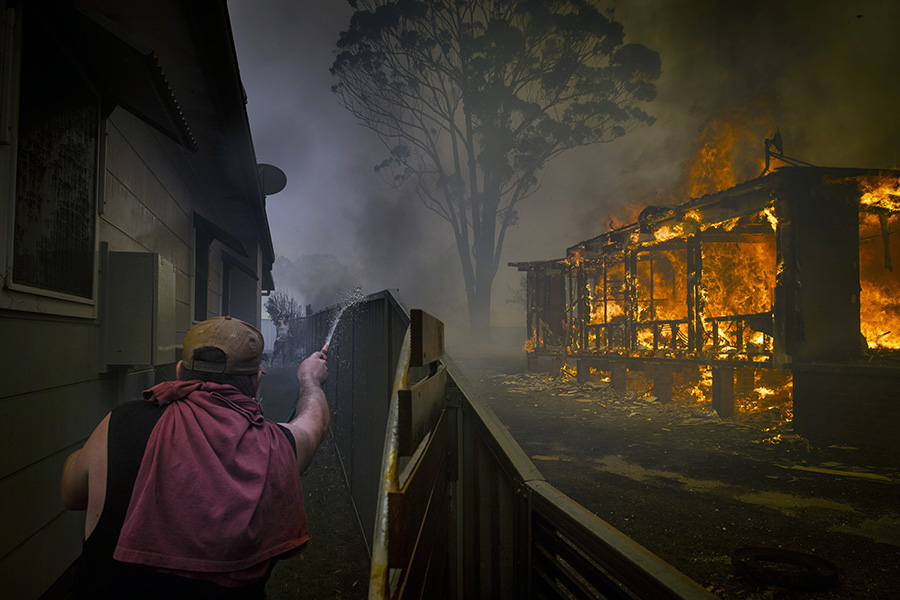 WOMBEYAN CAVES, Australia — Deep in the burning forests south of Sydney this week, volunteer firefighters were clearing a track through the woods, hoping to hold back a nearby blaze, when one of them shouted over the crunching of bulldozers.

“Don’t take photos of any trees coming down,” he said. “The greenies will get a hold of it, and it’ll all be over.”

The idea that “greenies” or environmentalists would oppose measures to prevent fires from ravaging homes and lives is simply false. But the comment reflects a narrative that’s been promoted for months by conservative Australian media outlets, especially the influential newspapers and television stations owned by Rupert Murdoch.

And it’s far from the only Murdoch-fueled claim making the rounds. His standard-bearing national newspaper, The Australian, has also repeatedly argued that this year’s fires are no worse than those of the past — not true, scientists say, noting that 12 million acres have burned so far, with 2019 alone scorching more of New South Wales than the previous 15 years combined.

And on Wednesday, Murdoch’s News Corp., the largest media company in Australia, was found to be part of another wave of misinformation. An independent study found online bots and trolls exaggerating the role of arson in the fires, at the same time that an article in The Australian making similar assertions became the most popular offering on the newspaper’s website.

It’s all part of what critics see as a relentless effort led by the powerful media outlet to do what it has also done in the United States and Britain — shift blame to the left, protect conservative leaders and divert attention from climate change.

“It’s really reckless and extremely harmful,” said Joëlle Gergis, an award-winning climate scientist at the Australian National University. “It’s insidious because it grows. Once you plant those seeds of doubt, it stops an important conversation from taking place.”

News Corp. denied playing such a role. “Our coverage has recognized Australia is having a conversation about climate change and how to respond to it,” the company said in an email. “The role of arsonists and policies that may have contributed to the spread of fire are, however, legitimate stories to report in the public interest.”

Yet, for many critics, the Murdoch approach suddenly looks dangerous. They are increasingly connecting News Corp. to the spread of misinformation and the government’s lackluster response to the fires. They argue that the company and the coalition led by Prime Minister Scott Morrison are responsible — together, as a team — for the failure to protect a country that scientists say is more vulnerable to climate change than any other developed nation. 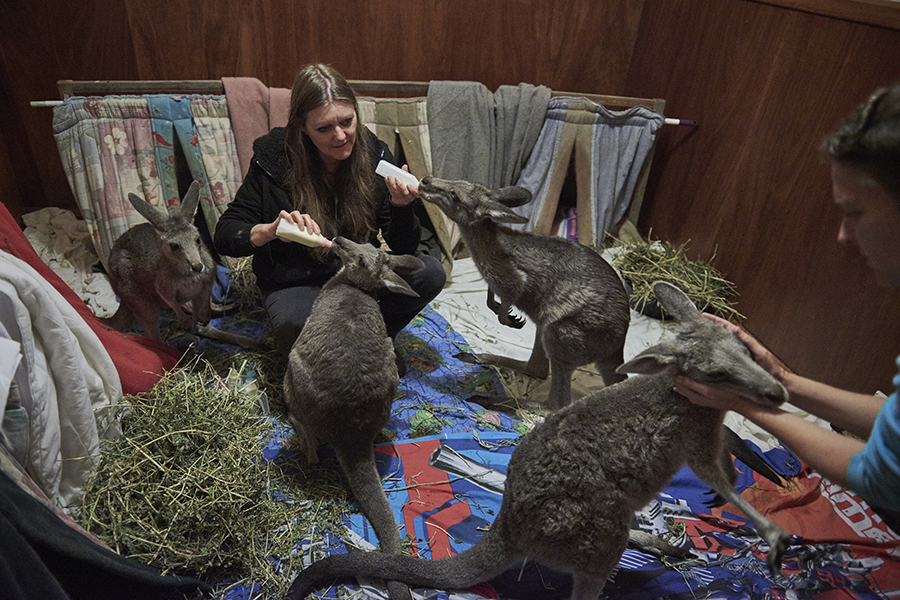 Susan Pulis, left, and Wendy Hendrickson feed kangaroos in a bedroom turned into a temporary shelter on Raymond Island in Australia, Jan. 6, 2020. As wildfires have killed at least 24 people, destroyed more than 1,400 homes and ravaged 15 million acres, they have also inflicted a grievous toll on Australia’s renowned wildlife. (Christina Simons/The New York Times)

Editors and columnists for News Corp. were among the loudest defenders of Morrison after he faced blowback for vacationing in Hawaii as the worst of the fire season kicked off in December.

In late December, the Oz, as the News Corp.-owned paper is known here, heavily promoted an interview with the government’s energy minister, Angus Taylor, warning that “top-down” pressure from the United Nations to address climate change would fail — followed by an opinion piece from Taylor on New Year’s Eve.

Other News Corp. outlets followed a similar playbook. Melbourne’s Herald Sun, for example, pushed news of the bushfires to Page 4 on New Year’s Eve, even as they threatened to devastate towns nearby and push thick smoke into the city.

Days later, residents in a town nearly flattened by the fires heckled and snubbed Morrison during a visit to assess the damage. A new hire for Murdoch’s Sky News channel, Chris Smith, branded them “ferals” — slang for unkempt country hobos.

As is often the case at Murdoch outlets around the world, there have been exceptions to the company line — an article about Australian golfer Greg Norman’s declaration that “there is climate change taking place”; an interview with an international expert who explained why this year’s fires are unique.

But a search for “climate change” in the main Murdoch outlets mostly yields stories condemning protesters who demand more aggressive action from the government; editorials arguing against “radical climate change policy”; and opinion columns emphasizing the need for more backburning to control fires — if only the left-wing greenies would allow it to happen.

The Australian Greens party has made clear that it supports such hazard-reduction burns, issuing a statement online saying so.

Climate scientists do acknowledge that there is room for improvement when it comes to burning the branches and dead trees on the ground that can fuel fires. But they also say that no amount of preventive burning will offset the impact of rising temperatures that accelerate evaporation, dry out land and make already-arid Australia a tinderbox.

Even fire officials report that most of the offseason burns they want to do are hindered not by land-use laws but by weather — including the lengthier fire season and more extreme precipitation in winter that scientists attribute to climate change. 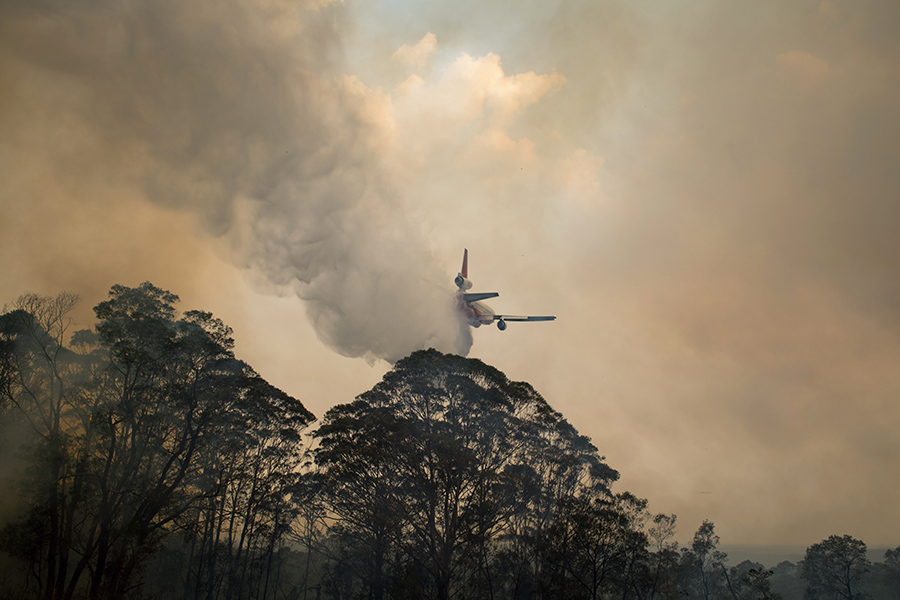 Still, the Murdoch outlets continue to resist. “On a dry continent prone to deadly bushfires for centuries, fuel reduction through controlled burning is vital,” said an editorial published Thursday in The Australian. It went on to add: “Changes to climate change policy, however, would have no immediate impact on bushfires” — a stance that fits hand in glove with government officials’ frequent dismissals of the “bogey man of climate change.”

It’s that echoing between officialdom and Murdoch media that has many people so concerned.

Dr. Timothy Graham, a lecturer at Queensland University of Technology, who conducted the study of Twitter accounts exaggerating the role of arson in Australia’s fires, said media companies also needed to be cognizant of the disinformation ecosystem and stop contributing to the problem. That includes mainstream outlets, like ABC News, sharing inaccurate maps that exaggerate the reach of the fires.

But in the case of the arson issue, he said, scores of bots and trolls — many of which previously posted support for President Donald Trump — have joined conservative media like the Murdoch outlets in promoting the idea that Australia’s fires are not a “climate emergency” but an “arson emergency.”

“Maybe 3% to 5% of fires could be attributed to arson, that’s what scientists tell us — nevertheless, media outlets, especially those that tend to be partisan, jump on that,” Graham said.

Of course, it is often hard to know just how much influence any media company has. Gerard Henderson, a columnist for The Australian, said he didn’t think there was much need to address climate change because it was already a focal point across the rest of the media.

“It’s hard to distract from climate change because it’s spoken about constantly,” he said.

But there are signs that the Murdoch message is making headway — at least in terms of what people make a priority. Many firefighters working the smoky hills south of Sydney hesitated to state their views on climate change this week (some said senior leaders had told them to avoid the issue). But they were quick to argue for more backburning.

Similarly, in Bairnsdale, Tina Moon, whose farm was devastated by the fires, said she was mostly furious about the government’s failure to clear the land around her property.