Tech giants like Facebook and Google thrive on data collected from its users and customers. Now Andreas Mundt, Germany's top anti-trust enforcer, is showing lawyers and anti-trust officials how to use the same valuable data to take on these companies 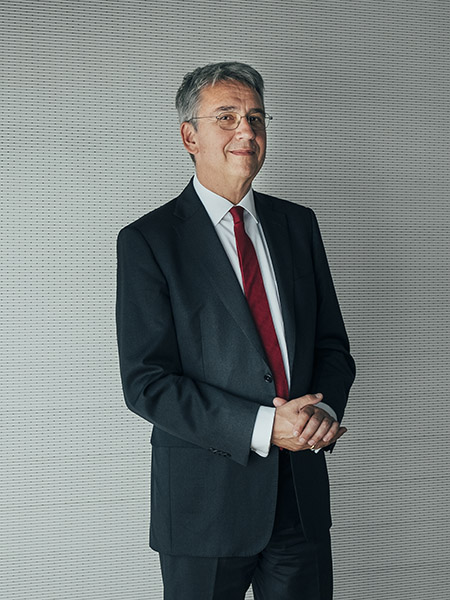 Andreas Mundt, Germany's antitrust regulator, at the Federal Cartel Office in Bonn, Germany, June 27, 2019. Mundt is urging other countries to take on Facebook and its peers by attacking what the companies value most: data. (Jann Höfer/The New York Times)

LONDON — Germany’s top antitrust enforcer, Andreas Mundt, recently asked a room full of lawyers, academics and regulators to imagine a wall filled with their personal information collected by Facebook and Google. He told them to picture it stocked with their data broken up into categories like finances, location, relationships and hobbies.

“That is you,” Mundt said. “And I promise you this wall knows you better than your wife.”

Few listened to Mundt when, a few years ago, he began raising alarms about the data collected by the tech giants. While online services like Facebook and Google did not charge a dime, people paid a high price by giving the companies so many personal details, he argued. And the people had no choice, because the companies had no real competitors.

But in February, his agency ruled that Facebook had broken the country’s law and demanded that the company stop automatically sharing data among the services it owns, like Instagram and WhatsApp, or websites that use its “like” and “share” buttons. It was the first such ruling in Europe, putting in practice ideas that had never fully escaped academic and think tank debates.

As U.S. regulators and lawmakers intensify their scrutiny of Big Tech, there is a lot of discussion about whether or how they could accuse the companies of violating antitrust law. Often, regulators look to whether a company is causing consumer harm — a standard that can be hard to prove when a service is free.

The response from Mundt is simple. The only way to take on Facebook and some of its peers is to attack what they value most: data.

He argues that the companies are so dominant in their core businesses that consumers, if they want to search the internet or be on social media, have no choice but to share their personal data. The data then strengthens the tech companies’ position over rivals even more — and therefore is anticompetitive, Mundt says.

The companies have strongly fought against his argument. But it is gaining traction in antitrust circles, as Mundt, who has led Germany’s antitrust agency for almost a decade, urges officials in other nations to make the same point.

After the Facebook ruling, Mundt received calls from regulators and lawyers around the world to discuss the idea. He helped organize a meeting of fellow antitrust officials in Colombia, where they spent four days discussing tech regulation. Joseph Simons, chairman of the Federal Trade Commission, and Makan Delrahim, head of the Justice Department antitrust division, were among those attending.

“The German authority is way out in front here and in a real sense the leading antitrust authority in the world with respect to these technology issues,” said Thomas Vinje, partner at the Clifford Chance law firm in Brussels and a veteran of tech industry antitrust battles involving Microsoft and Google.

Other regulators are looking to build on Germany’s approach. The European Commission is in the early stages of an investigation into Facebook, including its use of data, said a person familiar with the inquiry who spoke on the condition of anonymity.

Online platforms constantly collect data on users: what is clicked on, how fast a person scrolls past a post, what video a person stops to watch. The information helps a company like Facebook infer characteristics about interests, personal connections and financial demographics to better target advertising, or train machine-learning algorithms that can be used for future products.

It is an extraordinarily lucrative business model. Facebook made $55 billion from advertising last year, while Google’s ad sales totaled $116 billion.

What’s distressing to regulators is the lack of new competitors, a trend Mundt attributes to a company’s access to data and plentiful financial resources. He says Facebook controls more than 95% of the social networking market in Germany. Without competition, the social network unfairly forces people to make an all-or-nothing choice between agreeing to unlimited data collection or not using Facebook at all.

When investigating Facebook, German regulators built a map of the information the company collects. It looked similar to the one Mundt described during his recent speech — a web of personal information that branched into details about homeownership, life events, politics and buying behavior.

Mundt contends that Facebook and other tech giants don’t need to be broken up, as Sen. Elizabeth Warren and others have suggested. Instead, he thinks governments should limit their ability to collect data. The approach can have an effect similar to a breakup by isolating a company’s different services.

“The business model is to gather and process data, full stop. There is nothing else,” Mundt said in an interview. “If they don’t have data, they can have 10,000 very intelligent engineers who tell you what you can make out of data, but without the data you don’t make anything.”

Germany is at the forefront of a deeper realization among regulators and policymakers globally that laws must evolve to keep pace with technological change. Rules that regulate industries like oil or transportation, where dominance is measured in physical goods and price gouging, don’t as easily apply to services that are digital, are often free and rely on people’s attention and data more than infrastructure.

Europe has regularly used antitrust law to take on the tech industry. The European Commission has punished Amazon, Apple, Google and Qualcomm in recent years for unfair competition. And more actions are expected in the years ahead. An investigation into Amazon’s use of data was started last year. Margrethe Vestager, the EU’s top antitrust regulator, has said data must play a more central role in assessing market dominance in the digital economy, particularly when reviewing acquisitions by tech companies.

“Antitrust law will become irrelevant in the digital marketplace if it doesn’t adopt to understanding the power of data in analyzing market power and dominance,” said Gene Kimmelman, former chief counsel of the Justice Department antitrust division who is now president of Public Knowledge, a public interest advocacy group that favors stronger oversight of tech platforms.

Critics say Germany’s aggressive approach stretches the limits of antitrust law and won’t stand up to court reviews. Mundt’s focus on data is seen by some as overly simplistic and, if adopted widely, will make it harder to offer free services. Because data is shared widely among different businesses and industries, critics say, the attempts to limit its flow will cause unintended consequences and disruptions.

“European regulators are using competition policy to pursue objectives that are unrelated to competition,” said Eline Chivot, a senior policy analyst in Brussels for the Center for Data Innovation, a group funded by a Washington think tank whose board includes representatives from Amazon, Apple and Microsoft. “It introduces uncertainty.”

Facebook is appealing the German decision, arguing that it was transparent with users about how data is collected. The social network argues that its use of data helps improve the service and that German regulators singled it out for practices common across the internet.

Even those who support Germany’s broader goals question whether its approach will be effective. The February ruling allows Facebook to continue sharing data between Instagram and WhatsApp if it gets users to click a new permission box. Many wonder how effective the ruling will be because most people will sign off without much thought.

“It might be that you’ll end up in the same place you started,” said Jason Furman, a senior economic adviser in the Obama administration.

Furman, a Harvard professor advising the British government on tech regulation, said that rather than relying on antitrust law alone, countries should create a dedicated regulator for the tech industry, to match those covering the banking, health and transportation sectors of the economy. He said a watchdog with expertise in the field could better review a company’s behavior and use of data on a case-by-case basis. He said new laws requiring companies to make some of their data available to rivals also could seed competition.

In the United States, where antitrust law has a narrower scope than in Europe, experts say Germany’s approach won’t work because it relies on privacy and consumer protection rules that don’t exist in America. But lawmakers and federal regulators in Washington are studying new ways to account for data in regulating the digital economy.

Delrahim, the head of the Justice Department antitrust division, said in a speech last month that lack of competition may be leading to weaker online privacy protections. “Diminished quality is also a type of harm to competition,” he said.

Mundt says Germany’s approach is not a final answer, but he hopes it inspires bolder action by regulators, who he says must push legal boundaries just as the companies have done.

“We need innovative cases,” he said. “What we have done with Facebook can’t be found in a textbook.”