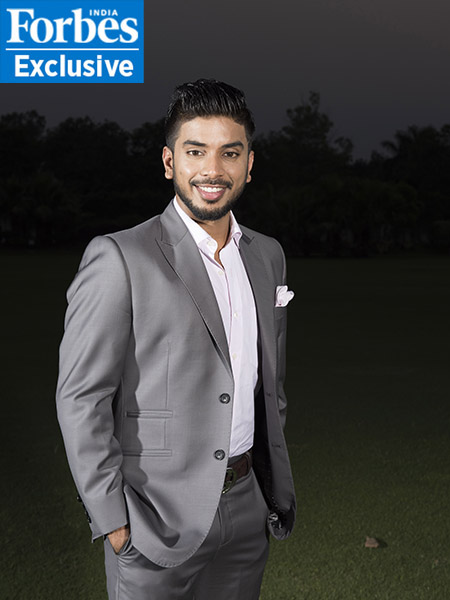 Keshav Bansal, director of Intex Technologies
Image: Amit Verma
When Keshav Bansal, director of Delhi-based consumer durables company Intex Technologies, acquired a franchise in the Indian Premier League (IPL) in 2015, he was aware that his team, Gujarat Lions, will exist only for two years. [Gujarat Lions and Rising Pune Supergiant replaced Rajasthan Royals and Chennai Super Kings following allegations of betting and corruption.] Spurred by the success his company’s brand and team tasted during the 2016 and 2017 seasons of the IPL, 26-year-old Bansal wants to continue to be associated with the world’s popular T20 cricket league. An acquisition may be on the cards, he says.

“For us at Intex, it was a very well-thought out move to buy this team for two years, completely as a marketing strategy. We have been successful in terms of our brand visibility and sales have risen in markets like Gujarat and Uttar Pradesh,” says Bansal, who made an upfront investment of at least Rs 80 crore to acquire the team and then invested some more on operations. “I can share with you that currently I am in discussion with other team owners to look at prospectively buying one of the existing eight teams.”

Bansal tells Forbes India that parallel discussions are also going on with the Board of Control for Cricket in India (BCCI) to explore the potential of continuing with Intex’s existing franchise.

Having a team compete in the most viewed sporting league in the country is not the only avenue of association with the IPL that Intex is exploring. Even before it bought Gujarat Lions, Intex was associated with the IPL as an on-ground and on-air sponsor. While those marketing activities are likely to continue, Bansal is even exploring the possibility of coming on board as the tournament’s title sponsor. Rights for IPL’s title sponsorship for the next five years (beginning 2018) are up for grabs.

“We have bought the tender and are in the process of strategising how to go about bidding. That will again be a strong and game changing move in continuing our association with cricket and IPL for a long time,” Bansal says.

Bansal’s Gujarat Lions and Rising Pune Supergiant (RPS) – another team owned by Sanjiv Goenka, chairman of the RP-Sanjiv Goenka (SG) Group – were two teams brought in by the BCCI in 2016 to replace Rajasthan Royals and Chennai Super Kings, which were suspended for two years. These two franchises are slated to return in the 2018 edition of the league.

Goenka, whose business interests range from power generation and distribution to retail, also expresses satisfaction with his experience of being a part of the IPL. His team did well in 2017 and narrowly lost the 2017 IPL final to Mumbai. “From being a team that was written off to being a finalist that almost won the title feels good,” Goenka tells Forbes India. He adds that his association with the IPL has helped his conglomerate’s brand image, especially at a time when it is entering consumer-facing businesses with the newly launched ‘Too Yumm!’ brand of consumer foods.

Goenka says he would also like to remain associated with the IPL, but in what capacity would depend on the BCCI.

In addition to cricket, Goenka is the co-owner of the Atletico De Kolkata football team in the Indian Super League. The RP-SG Group also announced its entry into the Ultimate Table Tennis League by acquiring a franchise called the RP-SG Mavericks.

Bansal isn’t restricting himself to cricket either. “Sports in general is a good marketing tool,” he says. Which is why Intex has entered the mixed martial arts sporting league, Super Fight League, with the Gujarat Warriors team. Both Bansal and Goenka maintain they will continuously evaluate other interesting opportunities in the business of sports.

Their bullishness on this business isn’t misplaced. According to the Broadcast Audience Research Council (BARC), the tenth edition of the IPL, held this year between April 5 and May 21, garnered 1.25 billion impressions, a 22.5 percent jump from last year. Ad inventory for this year’s IPL sold out three weeks before the tournament even began.

“The moment we advertise on IPL, we see a direct increase in sales. The financial commitments are high but there is a return to be made. No brand will think twice,” reiterates Bansal.

A 2016 KPMG report notes that in India, the sports sponsorship market grew by approximately 12.5 percent year-on-year (y-o-y) in 2015 to reach Rs 190 crore. Although cricket continued to corner a lion’s share of the pie with a 51 percent share in on-ground sponsorship, 61 percent in team sponsorship and 64 percent in endorsements, league-based events for other sports, such as football (Indian Super League) and kabaddi (Pro Kabaddi League) have propelled the interest of viewers and sponsors towards these sports.